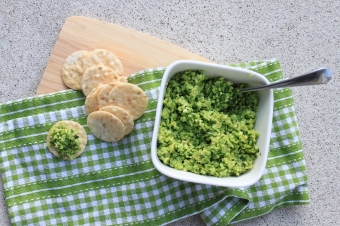 Tokyo caviar is an Asian-inspired play on Texas caviar. It uses edamame beans instead of black-eyed peas to make a satisfying appetizer or snack.

It seems whenever I manage to get one vegetable in my possession in check, I turn around to find another has multiplied like fruit flies on yesterday's nectarine.

The latest case of abundance came compliments of edamame from my CSA. I was in awe just a little a bit when I found a bag of fresh soybeans nestled among the tomatoes, herbs, peppers, dragon tongue beans, lettuce and ground cherries that Linda managed to squeeze into my basket a few weeks ago. I mean, fresh edamame grown right here in Niagara? Beats the way one usually finds these guys when not ordering them at an all-you-can-eat sushi joint: in the freezer at the grocery store.

Problem was, what started as one small bag that I had pledged to get to as soon as those pesky zukes and cukes were off my plate and in my belly had clearly become a case of manifest destiny in my fridge.

And so my attention, once devoted to the overwhelming zucchini and cucumber, switched to the growing mounds of hairy green pods filled with sweet spring green (thank you Laurentian pencil crayon set for that reference) soybeans. It was up to me to keep their population in check and so I set out to fix the problem like a gourmet Bob Barker.

That's how it goes when you have tunnel vision. You fail to notice life — and vegetables — happening around you.

Speaking of life happening, my daughter turned six months old this week. We spent a celebratory lunch on the official day laying under the silver maple in the backyard. I've never appreciated that old tree as much as I have this year, first by tapping it for syrup and now with how it entertains O. She loves to watch its leaves wave to her in the wind, their sliver backs glinting as they say hello.

It was the perfect lunch hour and one that I can't help but get a little emotional about. Such dates with my daughter, hanging out on a cartoon animal motif blanket in the grass, are numbered. I dread the end of my maternity leave, which seems to be sneaking up as stealthily as that legion of edamame that required full-scale culling.

In fact, I've dreaded my return to the 9 to 5 grind since the first day I was off. I love being a mom, love every moment with O, even the most trying ones. The thought of her going to daycare and me returning to a day job that I like but have never been in love with leave me feeling more than a little melancholy. It means picnics under the silver maple will have to be left for weekends only, and only if time permits.

I worry about little things getting in the way of the big stuff once I throw my job into my daily mix; those important moments that could be easily missed while looking the other way, distracted by drivel. When I was doing research for my book, local wine magnate and new-ish dad Donald Ziraldo remarked when he saw my belly that he didn't know how working moms could raise a child and go to a job outside the home every day. I smiled politely — he said it with such respect — and have since been wondering the same thing.

I've begun wishing hard to be independently wealthy. In the meantime, I've bought the odd lottery ticket hoping the gods of the windfall deem my reasons for wanting to strike it rich as both noble and worthy, and keep me from having to make any tough choices.

One choice that hasn't been hard? What to do with those edamame.  I am a mammoth fan of Texas caviar, that vegetarian spread that makes black-eyed peas a standout. And so that was my inspiration, except instead of channelling the deep south, I was feeling the far east with this one.

Every batch I've made of this aptly named Tokyo caviar has disappeared as quickly as Mt. Fuji on a foggy day. Meanwhile, I'm keeping a close eye on my growing herd of tomatillos. Rumour has it, with edamame numbers dwindling, they're plotting the next coup in my vegetable drawer.

I went with an Asian-inspired theme for this play on Texas caviar, given edamame are so often found in Japanese restaurants. Served with rice crackers, it makes for some fine party food. Or a snack fit for eating under your nearest silver maple with your favourite person.

Bring to boil a pot of salted water. Add edamame and cook for five minutes. Drain and submerge in cold water until pods are cool to the touch. (Can be done a day or two ahead of time.)

Place ingredients in a food processor and pulse until edamame are coarsely chopped. You don't want this to be a smooth paste so don't overdo it. Transfer to a bowl and add salt to taste.

Eat with rice crackers or slather onto a slice of your favourite bread and enjoy.

* Roughly one pound of fresh edamame in the shell yields 1.5 cups of cooked beans.