Posted Jul 18th, 2014 in Recipes, Summer Recipes, In The Kitchen 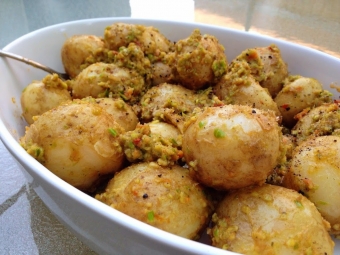 New potatoes and garlic scapes are an early summer highlight and pair well together as chunky pesto served atop boiled potatoes. A great main or side.

I'm not always the most confident person but I can confidently say that when it comes to being late, I kick butt, hands down.

My skills at tardiness are unsurpassed. I can get up a half an hour earlier and still be 10 minutes late for work. Want to meet for lunch? Bear with me because I'll be there after our date has started. Throw a baby into the mix and now it's just embarrassing how late I can be. I don't do it to be rude. I'm often just a bad judge of time and how long things take. In saying all that, I'm really late with this post, which is the last in the Canadian Food Experience Project and it comes equipped with a recipe that may also be a bit late for the season. Alas, it all seems fitting if I'm being honest with who I am, which this post demands. This final instalment of the Canadian Food Experience Project is supposed to be reflective — how and if we found our Canadian food voices, what we learned. I can say this with certainty: I don't know that I could define Canadian food with any more ease or clarity today than a year ago when this project started. From one region to the next, one province to the next, food is so vastly different and so influenced by every culture that is a part of Canadian society. The Niagara peach is as Canadian as poutine, bannock, maple syrup, cod tongues with scruncheons, Saskatoon berry pie, perogies (I'm thinking of you Glendon, Alta.), pizza, dim sum, fusion — the list goes on. I'm game to hear if someone out there has a definition of Canadian food. As for my Canadian food voice, it definitely has a Niagara twang. I'm grateful I live in this region for many reasons but when it came to this project, I found it made writing easier. After all, we're one of only a very few stone fruit-growing regions in the country, producing the most peaches of anywhere in Canada. Coming up with food blog fodder is helped along when you live in a region with Class 1 farm land and micro-climate that distinguishes it from other parts of the country where the traits that differentiate aren't quite as distinct. Eating Niagara is in its sixth year of existence and during that time, I've tried hard to champion this region and all its tasty attributes. It was fun to do it for this project and an audience that might not otherwise be aware of why Niagara is an important, unique part of Canada's food fabric. In some ways, I'm sad it's over because there's so much to say about this area that someone could write a book about it. Hey, wait a sec... Anyway, my Canadian food voice is one I hope to continue honing as I get back into blogging with more regularity. But who knows what the future holds and what changes could be in store, kind of like my plans for dinner one night last week. I had loads of garlic scapes in my fridge, that harbinger of summer's arrival as allium turns its energies from growing its spring flower (the scape) into those beautiful bulbous and pungent roots to be harvested just a few weeks from now. I've been grilling most of those snaky green scapes whenever they show up in my CSA basket or when I purchase them from a nearby farmer. Tossed in some olive oil, sprinkled with a bit of kosher salt and thrown on the barbecue for a few minutes, and you have my new favourite way of eating garlic scapes. The tangled mess is charred in places, taking away some of the garlicky bite and replacing it with an unsurpassed sweet smokiness.

It seems, though, that one of the most popular ways to enjoy these lovelies is in pesto. Not bad, but garlic scape pesto has never been my favourite. That was before I found myself at my usual fruit stand in search of cherries when I saw them: new potatoes. They were beautiful, small and with papery skins that were dusty with dry soil and so thin as to barely be able to protect white, juicy flesh that had yet to become really starchy with age. Suddenly nothing seemed to taste better to me than new potatoes with garlic scape pesto. It seemed like the perfect companion for those tiny tubers but this couldn't be just any garlic scape pesto. It had to have something more than a predictable garlicky punch for these first taters I saw peeking out of a paper bag, coaxing me to buy them. It also had to be thicker than what I would use to dress pasta. A hefty, almost crumbly, pesto was the only thing that could hold its own next to something as substantial as potatoes, and it would be amped up with a few sun-dried tomatoes. And so it did with sheep's Romano and pumpkin seeds, sun-dried tomatoes and, of course, garlic scapes. Potatoes with pesto were my meal that night; a simple affair that I could only get away with only because it was summer. The whole do is best enjoyed on a patio, free of pomp and circumstance. I realize many people have already eaten their way through their haul of scapes by this point in the summer. No worries if so. Just give this a whirl next spring. Us locals, however, can head to Quiet Acres farm stand on Lakeshore Road in Niagara-on-the-Lake to can find coiled bunches of scapes for much of the summer — perfect for those who don't mind things that run a bit late.

The Canadian Food Experience Project was started by Edmonton-based food blogger Valerie Lugonja, who has called on Canadian food bloggers to define the country's culinary identity by sharing their Canadian food experiences.

Nothing says early summer like new potatoes and garlic scapes. Even better that the two play well together in recipes. Most people would consider this a side dish but at this time of year, I could eat it as a main. No judging here if that's what you do, too. Carb counters be darned.

Wash potatoes and halve or quarter any large ones. Put in a pot and cover with water. Generously salt the water and bring to boil, cooking potatoes until fork tender, about 15-20 minutes.

While potatoes are cooking, put scapes, Romano cheese, pumpkin seeds and salt into the bowl of a food processor. Blitz on low or pulse, slowly adding olive oil. Keep processing until everything is well combined. This pesto will be thick and chunky, even a bit crumbly.

Drain potatoes and toss with pesto until coated. Add fresh ground pepper and salt to taste.

This recipe yields about two cups of thick pesto, so you can toss those taters in it with abandon. Leftovers are great spread on bread and popped in the toaster oven, or blitz them in your food processor with more olive oil to thin out and toss with pasta for dinner the next day. Pesto keeps in fridge up to four days.