The Canadian Food Experience Project: Five garden weeds to put on your plate 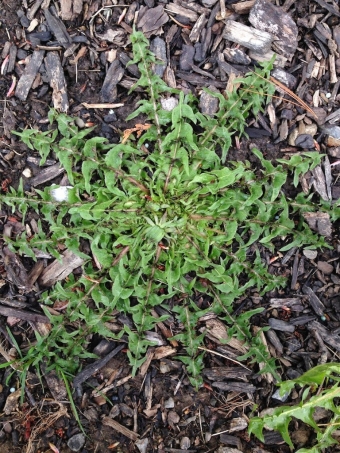 Backyards are full of good things to eat, and not just in the garden. These five edible weeds are healthy, delicious and bountiful.

My garden is barely a postage stamp.

Right now, it's mostly a barren swath of soil, home to a clematis that keeps hitting the snooze button on the growing season and some early rising rhubarb that's up but barely at 'em. I love it, though, for the gifts that it provides. Sure, I feel grateful when the herbs and vegetables I plant each year grow and thrive and reward me weeks and months later for what little effort I put into their upkeep. It's the surprise gifts that I love more, though. The ones I don't plant. The weeds. Yes, what other gardeners despise and work out the day's frustrations by pulling, I take delight in letting grow. I don't fret about these herbaceous squatters competing  with perennials who have seniority in my plot or annuals who lease prime real estate for a season. The reason is simple. Most of the weeds in my tiny plot are edible. They pack a health kick and more flavour than some of those invited guests we go to great lengths to make comfortable. I'm looking at you green leaf lettuce. Ever since the province imposed a cosmetic pesticide ban in 2008, lawns and gardens everywhere have become virtual salad bars. They're filled with roots, leaves and blooms that had been all but banished from existence by those poison-carting tanker trucks  homeowners once hired to spray weeds into oblivion. And for that we should be grateful. Some food security advocates lobby for insect farming to feed the world. I say we should eat more weeds. They're plentiful and effortless to grow, so why not take advantage of what's on offer? Just forage for edible weeds where you know the ground isn't contaminated (your backyard is a safe bet) and refer to a field guide to help you identify plants. Here are five common garden weeds that we should be putting on our plates instead of the compost heap:

They are Public Enemy No. 1 to those who value a pristine bowling green lawn but how can those fine-petaled flowers not make you smile? Yellow is a happy colour. It's downright glee-inducing when you come upon a sea of it on a boulevard. Some people go out of their way to wage war on what they see as the property value-reducing dandelion while others welcome it into their yards. You can purchase packages of dandelion seeds to sow in Germany. There's good reason. From the root to the flower, every part of this resilient wild greenery is edible. And it's healthy with all the iron, calcium and vitamins A and C that dandelion packs. Dandelions have more protein than spinach and are a decent source of vitamin D. Researchers at the University of Windsor are even studying the cancer-killing benefits of dandelion tea. The tap roots can be peeled, boiled and eaten like carrots. They can also be roasted and used for tea.  The leaves, when young, are a gentle bitter green that gives some bite to salads. They become more strident after the plant has flowered. That's when they're great stir-fried with garlic, crushed chilies and a bit of lemon juice. The sunny blooms can be steeped to make jelly or wine (how can you not love something that can turn into booze?). The buds can be battered and deep-fried, so break out the garden spade and some cooking oil.

Everybody goes ape for ramps, those overrated, over-harvested wild leeks that are harbingers of spring. But I go nutty at the sight of the first shoots of garlic mustard. I found myself doing a fist pump in the air this weekend when I saw a story about  Canadian chef Jason Bangerter whipping up culinary delights with garlic mustard at swanky Langdon Hall. Meanwhile, his colleagues in the kitchen are being clichés and losing their minds over ramps. All parts of this pervasive invasive are edible like dandelion, though the leaves are much less bitter and best for salads when young and tender as they are right now. By the time garlic mustard stands a good two feet tall and flowers, this greenery chokes out native plants species and can be overpowering to most palates. That's when it's perfect for pesto. Its potency gets toned down by nuts and cheese. Aside from flavour, garlic mustard is also loaded with vitamins A, C and E, potassium, calcium and iron. Purée the greens and add them to ricotta for ravioli filling. Get at the tap roots early enough and they can be minced and mashed with vinegar for a fiery horseradish substitute. A word of warning, though: the roots become woody as the season wanes and are the odds-on favourite to win a battle against your food processor.

These delicate purple flowers usually meet their end when my condo corporation's lawn care company shows up to cut our grass. But for a few fleeting days before that happens, I'll pause in my backyard to take in their pretty purpleness. I'll often pick them since their demise is inevitable. Wild violets add a pop of colour to salad and a subtle, slightly fruity taste when they meet the palate. They're high in vitamin C and like dandelion blooms, they can be steeped to make the most beautiful, jewel-toned jelly. They can even become a boozy concoction. Wild violet wine isn't unheard of, unless you're one of those who finds it thrilling to do them in with your lawn mower instead.

Perhaps the least palatable of this entire list of edible weeds, clover is ubiquitous but entirely edible. That makes up for being omnipresent on the world's lawns. Often described as famine food, clover is best eaten young if you're going to ingest it raw. Throw it in a salad or artfully deck out hors d'oeuvres with a single clover. It is part of the pea family, so clover is a good substitute if you have no pea shoots to be that eye-catching green atop devilled eggs or crostini. Older clover is best boiled if eaten at all.

I promote purslane as an edible weed with a caveat: My love for this succulent weed with its citrusy kick put a strain on my friendship with Foodsnark last year. We were yard-sharing again and much to my delight but to his chagrin, purslane popped up and spread its tentacles like a giant killer squid in a B movie. He wanted to pull it. I begged him to spare some for me. We didn't see each other — or speak — much for the rest of the summer. I know he loathed the stuff that I loved, claiming it threatened our tomato harvest. I begged to differ. Well, tomato, tomahto. Foodsnark and I appear to be on good terms again. Perhaps it's because it's been months since either one of us uttered 'purslane' in the other's presence. Even though it's potentially harmful to friendships, I implore you, eat this weed. Like dandelions, you can actually purchase seed for a cultivated version of this member of the portulaca family. You can buy bunches at farmers markets (why buy when you can get the weed for free in most gardens?) and it's a dietary staple in some Mediterranean and Middle East nations. It has more omega-3 fatty acids than fish, and filled with calcium, magnesium, potassium and beta-carotene. So how could you ever look at purslane as a pesky weed again? Grab some tomatoes, parsley, cucumbers, lemon juice and olive oil and you have a salad that is likely appearing on countless tables in Turkey right now. The Canadian Food Experience Project was started by Edmonton-based food blogger Valerie Lugonja, who has called on Canadian food bloggers to define the country's culinary identity by sharing their Canadian food experiences.