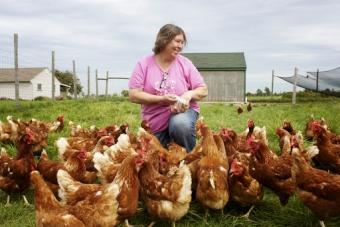 Not my usual fare but I'm still getting back into the swing of cooking for myself since my daughter's arrival four weeks ago. That makes convenience food fair game for me right now.

I just ate a vegetable pot pie that I didn't make myself, save for reheating it from frozen.

Not my usual fare but I'm still getting back into the swing of cooking for myself since my daughter's arrival four weeks ago. That makes convenience food fair game for me right now. This pre-fab pot pie is a little different, though, than what you might be conjuring. It was made locally by a St. Davids business called Health Nut Vegan Foods and I bought it through the Niagara Local Food Co-op. In fact, a lot of my recent meals have come from co-op vendors: Chana masala, sweet potato and black bean chili, tofu deli slices for sandwiches. None of it has unpronounceable preservatives or funky chemicals putting me at risk of indigestion or my daughter growing a third eye. Just simple ingredients, much like what I'd use if I were making each meal myself. While I've made a point of ordering regularly from the co-op, which is a virtual farmers market with shopping done online, that order with the vegetable pot pie made the entire two years I've been a member worthwhile. My life is made easier with healthy meal options that I don't have to stress over making myself as I get accustomed to being a sleep-deprived mom running on fumes. What's disappointing, though, is that after operating for six years, the co-op can't break even. Its bottom line is in the red and, according to an email I received recently from Arden Vaughn, former co-op president and owner of Lake Land Meats, the board has to dip into reserves to keep afloat a very convenient way to support local farmers and food businesses. As Arden put it, "the co-op is in dire straits financially at this time. We have been working hard to make the co-op what we think you want it to be, yet our biggest challenge has been and continues to be low volume of sales." The co-op's only source of revenue is the 15 per cent fee it collects on each order (five per cent from the consumer and 10 per cent from producers). And it hasn't been enough to keep the co-op in the black. As a result, the reserves it's relying on to continue operating are "alarmingly low." That has me worried about the co-op's fate. Though it took me four years to get a $50-membership, and only then it came as a gift from a former boss, I can't really imagine not having the co-op as a shopping option. Admittedly, I hesitated joining because I am a member of a CSA, getting a weekly share of vegetables during the growing season, and hitting up farmers markets and stands regularly. I didn't think I'd need or use it. But since joining the co-op, I've purchased local foods that I can't get from either option, nor the grocery store. It's where I get my Ying-Ying tofu, a product far superior to anything at the supermarket thanks to Ying-Ying using non-GMO soy in its handmade, small-batch bean curd. I order my husband Pingue prosciutto, which is priced much more reasonably through the co-op than at the odd local food store that carries it. It's the only place I know that carries Aceto Niagara icewine mustard, a dijon that balances the sweet and sour of mustard beautifully. I get award-winning apple cider from Torrie Warner, who generously tucks extra apples or pears into my order from time to time. Sometimes I opt for local grape juice from the Yungblut family in Fonthill, one of the few farmers still growing juice grapes after that industry shrivelled up in 2007 when the St. Catharines plant that processed the fruit for Welch's closed. It's where I've found some of the most luxurious lip balm from Garden City Essentials and some of the most delicate goat's milk soap from Zeta Farms. I can buy bread and fruit. It provides me with pawpaws that I've never seen elsewhere and the freshest Persian walnuts from Grimo Nut Nursery. Sure, I could drive to each farm to buy these items from the grower but the truth is, I'd rather spend that time eating than traversing the peninsula in search of my next meal so I'm grateful for the co-op's convenience. I also don't know where else I could buy some of the foods that have become my kitchen staples were it not for this virtual food store. I'm not sure why the co-op is struggling other than something about it isn't resonating with Niagarans. After six years, the co-op's existence is often news to many people to whom I mention it. Marketing and even the all-important branding have clearly been challenges. I wonder if it's the $50-membership fee that scares people off, though I can vouch it has been money well spent by that boss who bought it for me. Perhaps it's the way the co-op operates. Maybe local food lovers long for face-to-face interaction with the people they're buying food from and an online store seems too impersonal. The co-op does have annual barbecues for members to meet producers and each other. And given I've been picking up my orders at Lake Land Meats for the past two years, I like to think I can consider Arden a friend by now rather than just someone with whom I do business. Arden put out the challenge to members to put in orders at least once a month to help improve the co-op's situation. An update since that initial bad news-bearing email said some have stepped up. As I sit here with my laptop, daughter and an empty pot pie plate getting worked over by the schnoz of my cat Louie, I hope it lasts. And I hope this post will inspire people to check out the co-op and buy a membership because selfishly, I want more locally made pot pies — or grape juice, cider, tofu — on my dinner table. For me, my daughter and Louie's schnoz.