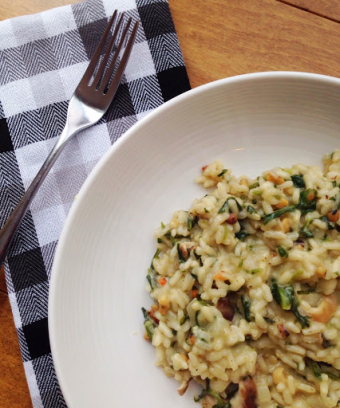 Rumour has it tomorrow is the first day of spring. It's supposed to show up around lunch time.

I can only hope it makes a grand entrance because despite what the thermometer says, from my perch in front of my laptop, it doesn't look like winter is giving up its iron grip on us. I feel like it's pulling a Charlton Heston, taunting us with "From my cold, dead hands..."

And while I have enjoyed this first real winter that I've experienced since moving back to Ontario from the Prairies 12 years ago, there was one issue starting to give me severe cabin fever: the lack of anything green and fresh that was local. I long for those signs of green garlic or wild hairy bittercress, despite its hideous name, that I found in my garden around this time last year, and celebrated like the gift that they were. I am positively peckish for something fresh. Something that signifies the end of root vegetable season.

This winter, in all its infinite cruelty and inability to let go, has put me even more on edge at the sight of a beet, carrot, potato or squash. Until last night, when I made my four-veg latkes, I couldn't even stomach the thought of tucking into the beautiful celeriac that was living in my garage.

I've found myself nearly frothing at the mouth at the crates of tiny artichokes, imported from the U.S., that suddenly appeared in the middle of the produce section of my grocery store. I caved and bought six. They were gone in a flash.

There have been moments of proper relief in the form of leafy greens from Linda Crago, Creek Shore Farms and Chez Nous Farms, whose unheated hoophouses pushed out the likes of kale, mustards, and chards during the cold season. They disappeared quickly when in my possession. I couldn't devour them quickly enough and the rush I'd get afterward?  I kid not — greens, especially when it's been more than a week since I've eaten any, give me an endorphin rush when they finally get in my belly.

The grocery store versions just don't compare. Greens grown in our cold climes take on a sweetness that those Texas imports don't have. In fact, those warm weather versions are a little on the bitter side in comparison. If grocery store greens are all that a person has eaten, well, no wonder kale has its haters.

Last week, though, after a long drought of local greens, I was supplied with more of this most wonderful drug. It was a bag of mustards, some kales and arugula from Linda. The timing couldn't have been better. I felt my body craving a healthy hit and I had been waiting a long time for this one in particular.

Linda's hoophouse, which mostly shuns winter's advances, was no foil to its frigid ways in January and February's deepest, darkest depths. It started with her being frozen out of the structures, which look like translucent Quonset huts. Then it was simply too cold for her crop of leafy greens to grow quick enough to keep people like me sated.

Patience pays off, though. That delivery just over a week ago came with a sign of spring in it, just when I needed it most. There was a thicket of arugula, in all its peppery glory, tucked inside the delivery.

As I munched on the accompanying mustards, I mused about what to do with my bunch of arugula. Given winter's unrelenting ways, I came up with the perfect showcase for these green, jagged-edged beauties.

Risotto. Hardy enough to fend off a chilly night at dinner, yet not overbearing enough to keep the arugula from being the shining star on my plate that it deserved to be.

And now, with spring almost officially here and the countdown on to a new edition of Linda's CSA, which usually means several more instalments of mustards, arugulas, kales and chards in those first few weeks, I will celebrate again with this creamy concoction that also starred shiitakes and walnuts.

Even though the calendar may have turned a corner, I know there are still some chilly nights in my future. This strikes the perfect balance between those reminders of what was and what's to come.

In a heavy-bottomed pot, over medium-high heat, warm:

In the same pot, over medium heat, warm:

Once the sixth cup of broth has been added, even if rice isn’t fully cooked, stir: