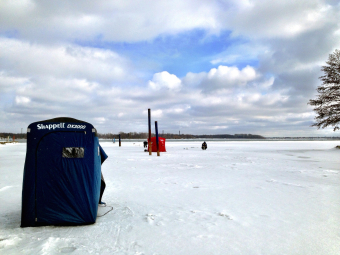 The red wooden ice fishing hut against the stark backdrop of baby blue sky interrupted by the ruler-straight line of Lake Simcoe's frozen surface was so beautiful, I had to buy it when I saw it 12 years ago at the One of a Kind craft show in Toronto.

The framed photo propped against the wall in my office started it all.

The red wooden ice fishing hut against the stark backdrop of baby blue sky interrupted by the ruler-straight line of Lake Simcoe's frozen surface was so beautiful, I had to buy it when I saw it 12 years ago at the One of a Kind craft show in Toronto. It also awoke in me something primordial. There was something about sitting on a frozen lake, just me, my rod and the anticipation of catching fresh fish, that led me to believe I had to go ice fishing. The second toe on my left foot, which regularly turns nose-wrinkling shades of purple and blue the moment it feels chilled, is the regular reminder that it was all nonsense. Still, when I landed my first reporting gig at the Simcoe Reformer, not far from the shores of Lake Erie, trying my hand at ice fishing — thanks to that photo — was high on my to-do list. The shallowest of the Great Lakes and home to the prize catch of yellow perch, Lake Erie would be the place that would affirm the romantic image I had of venturing onto frozen water to get my dinner. I was certain. I asked friends and family to join me, even my new co-workers. They laughed, content to settle for the fried versions already caught and on the menu at such landmarks as the Erie Beach Hotel and Knechtel's in nearby Port Dover. In hindsight, they knew something I didn't. It wasn't long after my arrival at the Reformer that I was sent to St. Williams, a hamlet west of Simcoe, to do a story on the start of another ice fishing season on Lake Erie. With no notice given to me by my editor before walking into the newsroom one uncomfortably cold day and being told I had to leave that very moment, I got in my car. Excitement and fear were my travel companions. Ice fishing. Hooray, I thought. Ice fishing. Oh crap. I'm wearing a wool felt coat, light turtleneck sweater, trousers and loafers. This could go horribly wrong. When I arrived at the fishing hut rental office, the operator took one look at me and said "You can't go on the lake like that. You'll freeze. Didn't anyone tell you?"

Uh, no. Perhaps my editor had never been ice fishing and my business casual garb looked sufficient when he sent me on my way. Whatever the case, I knew I was in trouble, even after the operator let me borrow a ratty old Ski-Doo suit he had crumpled in a ball behind a paint-chipped counter. "Sorry, I don't have any boots," he said. I put on a brave face and waved off his apology before climbing on the back of his snow machine to barrel out onto the lake, about one mile from shore. I looked heavenward the entire trip for fear that looking down would invite disaster: cracking ice that would part and gulp me down into its hypothermia-inducing belly below. We found a willing interviewee catching yellow perch in a hut that shielded us from the bracing wind blowing across the lake. But little could be done to protect my loafered feet. By the time I had my soundbites 45 minutes later, a cold-induced ache was migrating up my legs. I could have cried from the pain but held back the tears lest I meet with more disapproval from the locals. I got home after work, my foot finally thawed, to see the telltale waxiness of frostbite on my toes. The second one on my left foot got the worst of it and 11 years later, it still turns purple and blue to remind me of that day. It was the day I lost interest in ice fishing. Like that moment a crush, built up in your mind to be glorious and perfect, dashes your fantasy by admitting he chews his toenails — and thinks there's nothing wrong with it. A Canadian love affair foiled before it even had the chance to start. I gave little thought to ice fishing for years after that. But in January, while suffering through a winter of Prairie-like wickedness with sharp winds and temperatures out of place in Ontario's banana belt, I started thinking about it more. Ice fishing photos flooded my Instagram feed and I got inspired to write about it again, this time for my column in the local paper. This winter is the first in four years that there has been enough ice on Lake Erie for fishers to safely park a hut and drop a line in bone-chilling waters. In fact, the lake was nearly frozen all the way across to U.S. shores until a recent thaw. Lured by this bit of information, I made a date to spend time on the ice with Denis Kreze, an avid angler who runs Fishin' Niagara, a fishing excursion business and tackle shop in Fort Erie.

Denis Kreze with a yellow perch.

I came properly dressed in a parka of George Costanza-like proportions and boots that kick winter into submission. Now a vegetarian, I wasn't interested in reeling in the big one myself but I watched as Kreze masterfully snagged perch after perch. A real delicacy, Lake Erie yellow perch seems to be adored everywhere but Niagara. It makes few appearances on local restaurant menus, which star Atlantic salmon instead. Meanwhile, in nearby Port Dover, it's the unofficial regional dish, beckoning locals and tourists alike to feast on the small, flaky, white fillets like candy. Kreze eats lake fish up to three times a week. It's safe practice despite the trepidation of some, who see the Great Lakes as toxic cesspools and the creatures swimming in them as vessels of killer contaminants. Kreze eats smaller, younger fish who haven't had the chance to build up scary levels of mercury or other heavy metals in their systems — a real concern depending on the species and size of fish. Cleanup efforts in the 1960s also helped rid the waterway of toxins that leached into it and could set its tributaries on fire. Not to say Erie is a picture of health. There is a dead zone in it, with huge swirls of green algae sucking the life out of it. Still, it's been tough for it to shed its outdated reputation as a massive pool of pollution. Kreze, who grew up fishing on the lake, is unfazed. Pan-fried, smoked, ceviche (walleye or bass belly are ideal for it), or microwaved (it just flakes apart), he swears by the fish Lake Erie provides. It's wild food; something that awakens that primordial instinct silenced by frost-bitten toes or the fish monger who takes the hard work out of dinner.

An example of Kreze's microwaved catches. Photo by Denis Kreze.

"With so much water around us, people don't eat fish, and it's like, why?" he asks. "Once you have a place to go, all you need is a rod and licence and confidence. That's the biggest thing with fishing. You need confidence, otherwise you won't catch anything." After four hours on the frozen water with Kreze, I wouldn't say my dreams of an ice fishing love affair returned. But when he tweeted a photo of a plateful of fresh perch later that night, I did feel a sentimental twinge for what could have been. **** While I don't have a recipe for pan-fried Lake Erie perch, this one would easily do a catch justice.  The Canadian Food Experience Project was started by Edmonton-based food blogger Valerie Lugonja, who has called on Canadian food bloggers to define the country's culinary identity by sharing their Canadian food experiences.