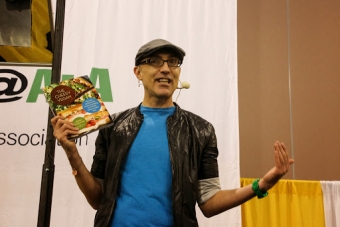 Take it from this undisciplined vegetarian who has, over the past eight years, had her meals scrutinized by skeptics and critics alike. Vegan food is no oxymoron, omnivores.

VegFest has been a huge event the past two years it has run. What is it about the event that you think has resonated so much with people? KC: I think that people enjoy the festival for a number of reasons. First of all, it's a free community event in downtown St. Catharines. It is a family-friendly event, and we work hard to make sure that the atmosphere is fun and celebratory, a festival where you can enjoy yourself and sample delicious food. I think this brings out a lot of local people — people who are curious about the event but who are also looking for something fun to do on a Sunday afternoon in June in Niagara. Omnivores might be inclined to write off or dismiss VegFest, feeling like they wouldn't fit in or they may worry about being preached to and judged. What would you say to alleviate those concerns? LM: This is certainly something we were very aware of when we began creating the festival. The last thing we want is to create a negative experience for anyone. We make a conscious effort to create a fun vibe. One of the themes of the festival is compassion and we believe that this extends to everyone – to each other. The festival is about approaching the complexities of our food choices with gentleness. KC: We aim to create a non-judgmental environment where everyone is welcome. Even if someone has no plans to become vegetarian or vegan there is something for them at the festival. Perhaps they will pick up a recipe that shows them new ways to use their garden produce or perhaps they might find themselves going home with a cat they adopted from the Niagara Action for Animals catmobile. Or maybe they will just get a six pack of cupcakes to take home and enjoy. I mean, who doesn’t love cupcakes? They might catch a speaker who is talking about gardening techniques or they might enjoy watching a cooking demo. We have kids activities and all kinds of delicious food to sample. We will even have food trucks this year. There is, in short, something for everyone at the festival. What can people expect at the pop-up on Feb. 8? KC: The pop-up party is going to be a fabulous night. The night is hosted by John Schlimm, award-winning cookbook author and celebrity chef. The talented folks at Rise Above are going to be cooking up some dishes from John’s latest book for people to sample. There will also be local beer and wine, and desserts from Rise Above’s bakery. We have goodie bags for all attendees, and there are some fabulous prizes to be won as well. In short, it is going to be a fun night out in support of the festival. Good food, good drinks, good company. What better way to fight the winter blahs. Finally, what advice would you give to someone to help them incorporate more plant-based foods in their diets? LM: Substituting often seems to one of the ways to first start increasing plant-based foods. Try using veggie ground round in a meat sauce or cashews for a cream sauce. Small steps do not have to be hard or complicated. KC: Talk to people. Join a cooking class, an online community, write a blog about the recipes you try, or share a subscription to publications like VegNews with your friends. Sharing recipes, ideas, tips and tricks is really important. I think this is why we are so committed to Niagara VegFest because we know first-hand how hard it can be if you feel that you are the only one in your family, school, or workplace that is interested in being vegetarian or vegan. Niagara VegFest helps people understand that they aren’t the only one wondering how to grow kale or how to cook tofu, and it also empowers them by giving them the information they need to make informed decisions — decisions that fit with their health goals or their personal ethics.