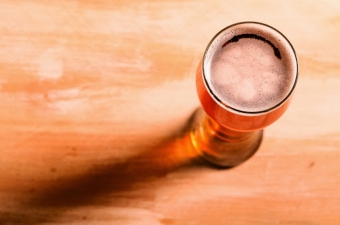 A St. Catharines couple has dreams of putting up their shingle on Niagara's ale trail.

Homebrewers Chris Peters and Crystal Morin have ambitions of beckoning the thirsty with fruit beers, made by fermenting some of the bounty that grows in Niagara. Think an apricot and orange IPA, a raspberry Hefeweizen, or a maple vanilla porter, sourcing locally grown ingredients when possible and bottling them under their aptly named Hop'n Orchard label.

It's a heady idea but after testing out some of their concoctions on friends, using a five-gallon pilot brewing system in their garage in Western Hill, the beer afficionados say their hobby has the makings of a solid business plan.

"We've always knocked around the idea playfully," Peters said. "But when our friends really liked it, we thought maybe we were on to something." Problem is, how do they take the idea from their garage to growlers they can sell legally? On a lark and with no money of their own set aside to build their dream brewery, the couple entered a contest called Start Something with Alesse. The competition for upstarts provides those with winning business concepts with $5,000 and mentorship to take their ideas from paper plans to concrete reality.

Peters and Morin hammered out a business plan that was judged to be among the top five of more than 1,300 applicants in Canada. The only hitch is they now need the votes to win.

"This contest could be the beginning," a hopeful Peters said. "This $5,000-investment could lead to other investments coming on board. The contest forced us to really refine our vision."

If they win, they would use the cash to buy a 20-gallon brewing system and get other infrastructure in place that would enable them to get a licence to not only brew but legally sell their hoppy, malty, yeasty and fruity creations.

Inspired by the work of other craft breweries and distilleries popping up in Niagara and "tapping into local resources," particularly fruit, Peters and Morin started buying their own fermentable shares of local harvests at farmers markets. They created beer recipes based on brews they thought made the perfect pint and that would be marketable. They've also travelled to different craft breweries in Canada and the U.S. to see the creativity on tap elsewhere, picking up pointers and ideas, like how to make muscat grapes into suds rather than tipple.

"What would people be willing to drink if you put a pint in front of them?" Peters said. "Then we looked at ideas to make things different. That's where we came up with fruit injections (for our beers).

"Being in Niagara Region, we've got so much access (to fruit), why not take advantage of being that unique pocket where can access all this fruit and in some cases that we can only access here in Niagara?"

If Hop'n Orchard survives three rounds of voting — the first round closes Feb. 3 — Peters is optimistic that he and Morin could do something similar to what Bridge Brewing Co., a nanobrewery in Vancouver does within six months of receiving their prize. And they hope to do it in downtown St. Catharines.

Bridge is open limited hours each day to sell growlers of their ales, stouts, bitters and kolsch, and only recently began selling kegs, Peters said. He already envisions doing the same with his white wheat IPA, which he said is commercial ready, and the maple vanilla porter, which only needs minor tweaking at this point.

"They've got the model we'd like to take, putting beer in front of people," he said.

Visit Start Something with Alesse to vote for Hop'n Orchard Brewery.