The conflicted vegetarian and her chowder 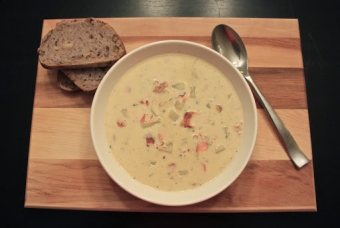 I have an on-again, off-again relationship with fish.

In the minds of many, this makes me a bad vegetarian, even if my relationship with the gilled types has been more off in the eight years since giving up meat.

Still, there are moments when fish and mollusks have been my saviour, like the time when, after withering away on the 100-mile diet for weeks, winding up undernourished, weak and anemic, I finally listened to my body and gave up the ridiculous quest in exchange for a plate of pasta and unsustainable (no doubt Thai-farmed) shrimp. Otherworldly by 100-mile diet standards. Necessary to help me mend my body with the protein and carbs that it had been missing for the previous six weeks. There was also the time I had some awful virus shacked up within me that kept me bathroom-bound for four days, hugging the toilet as I genuflected to whatever it was that was trying to do me in. After four days, my system entirely purged and my appetite tentatively letting me know it was returning, I jumped up from languishing on my couch to proclaim, 'I need meat!' My husband obliged and got me takeout — a shrimp salad in all its medicinal glory. I'd eat some seafood — I drew the line at lobster and crab — to appease my mother who seemed less stymied by salmon in the kitchen than lentils when we came to visit. But I did it begrudgingly until I finally said no more. I was, after all, a vegetarian.

And it seems now, with me pregnant and afflicted with the odd craving, I am on again with fish, having eaten it a handful of times. Fish and chips slathered with tartar sauce sounds perfect in my current state, compared to a filet of sole or plate of tilapia. Something about that greasy, glorious heart attack on a plate. I have no justification for it, however, other than being guided by my belly when it comes to deciding on my next meal.

In a moment of real weakness before Christmas, I found myself standing in Lake Land Meats with a small smoked trout filet in my hand. What was I thinking? I was racked with guilt, common among Catholics, Jews and wavering vegetarians. Still, I left with my filet, tailed by my guilty conscience the entire drive to the grocery store where I bought myself a bottle of hemp oil with the hope that regularly gulping plant-based essential fatty acids would prevent me from ever doing again what I had just done.

Has it? Yes. And no. I recently found myself in possession of another filet. OK, to be clear, it wasn't as accidental as that sounds. I ordered it from the Niagara Local Food Co-op because the magic that I worked with that first filet compelled me.

And truth be told my husband ate most of it after recoiling in horror at the site of the filet. That's what happens when you turn the deep pink, oily side of trout into rich smoked fish chowder, with rib-sticking starchy potatoes and sweet carrots (both grown in Niagara), and a touch of thyme to make it all the more aromatic, earthy, even. Suddenly it becomes appetizing. More than that, in fact. It becomes the makings of new cravings that those greasy fish and chips just can't touch.

Fortunately, those cravings are few and far between, I'm sure because of the hemp oil, whose taste I can barely stomach. Doesn't make me feel any less guilty about loving that chowder, though.

Melt the butter in a heavy-bottom pot over medium-high heat.

Add the onion, carrots, and cook until onion is transluscent and carrot starts to soften.

Add the vegetable broth, potatoes, thyme and bring to a boil and reduce heat to simmer, covered, for 15-20 minutes our until potatoes and carrots are tender but not mushy.

Then add the fillet of smoked trout, cream, pepper and salt to taste.