The Canadian Food Experience Project: An ode to my favourite harvest, the Kieffer pear 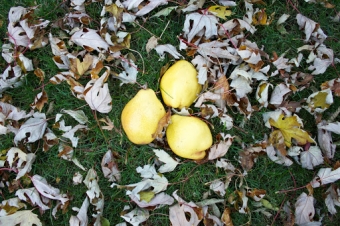 Some people might call me fickle or a fairweather foodie.

Whatever is being harvested at any given moment is my favourite thing to eat and convinces me that particular season is the most wonderful time of year. I gush about asparagus in spring. Strawberries soon after. Cherries to start summer. Peaches, oh yes peaches, to make me swoon for most of hot weather. And wait, there are grapes to make late summer fantastic, even if it's the segue into fall. And how about blackberries in late August? Or those early arrivals among apples and the first squash that make me pout just a little less when summer bids adieu for another year?

Then there's cabbage. And kale, which, lucky for me, comes just about all year in my CSA baskets. Thank you hardy green — and yes, you, too, leafy mustards. You make the most awful depths of winter bearable, if not quite my favourite time of year.

Really, I think my serial monogamy with every harvest is a sign of gratitude more than me being unfaithful to the fruit or veggie of yester-jour. Through it all, though, there is one harvest that remains my sentimental favourite. It wouldn't be fall on this blog without me showing some love for the Kieffer pear, that much-maligned, misunderstood urban fruit that makes longtime farmers cringe and chuckle all at once. But for me, it is the raison d'etre for the Garden of Eating - Niagara — the muse that inspired me to organize volunteers to pick this seemingly always unwanted fruit and donate it to local social organizations.

As I plug away at my book (and neglect this blog in the process — sorry about that), I try to work the Kieffer into conversation with the fruit farmers I interview. They're surprised someone my age even knows what a Kieffer pear is. I just want to know its story. I'm curious how this lumpy pear that looks more like a quince than its Bosc or Bartlett cousins — and is darn near as hard as one, too, when right off the tree — became pear-sona non grata in the fruit world.

With its mild flavour that leans more toward lemony than sugary sweet, and its gritty flesh that softens if you have about a month to wait, the Kieffer doesn't seem to have much going for it other than being plentiful and disease resistant.

"Sure it's disease resistant, but it's also human resistant, too," Torrie Warner, a Beamsville fruit grower joked with me.

OK, I laughed at the Kieffer in that moment, too. Still, I love it. And so does one local fruit scientist, who uses the Kieffer when breeding new varieties of pears because of its desirable disease resistant genes.

The Kieffer was used for a long time in the local canning industry, something it was perfect for with that ultra-firm texture and its need for little attention throughout the growing season. But depending on who you ask, it fell out of favour long before our local canning industry disappeared. "Prisoners stopped eating them," lamented John Smith of Cherry Lane in Vineland.

Smith still keeps a small stand of Kieffers, which borders his peach and bosc orchards on his family's Victoria Avenue farm. But now instead of serving as filler in canned fruit cocktail, the Kieffers have the important job of acting as a buffer between the Smiths' orchards, and homes and traffic in front of the farm when the family sprays its other crops.

Warner's take on the Kieffer's history varies ever so slightly.

"Then the communists stopped eating them. Once they opened their markets to other fruit, they didn't want our Kieffer pears anymore," he said. A pear perfect for prisoners and pinkos until they either revolted or got a taste of something better. The poor Kieffer pear. Fate stopped being its friend by the late 1970s.

Yet my love for it is unwavering, even if I only harvested about 250 pounds this year instead of the usual half ton (the video above is from that harvest). Apples, this year's comeback kid of fruit after being decimated by last year's nasty April frost, took my attention away from my beloved Kieffer. By the time I had a chance to get at those Kieffer trees lining boulevards here in St. Catharines, I had used up all my volunteer credit, daylight and dry weather were at a premium, and so was time as my attention shifted from rescuing fruit to researching for my book.

Being nearly four months pregnant made the prospect of tenaciously scaling ladders to the highest rung in my efforts to reach the best fruit a little less appealing, too.

Still, the 250 pounds we did get, part of an overall harvest of nearly 3,500 pounds of fruit this year, will once again be turned into what I think makes the Kieffer the cherry on top of a fall fruit harvest.

They will become pear sauce, perhaps the most palatable way to eat a Kieffer, though saying that doesn't do its deliciousness much justice. Then the sauce will be donated to a local food bank by a class of culinary students that works serious magic with Kieffer.

All part my master plan, really, to get this often rundown fruit to experience the renaissance I feel it deserves.

I got this recipe from Mike Gretzinger, the chef-teacher whose hospitality and tourism high skills major students with the Niagara Catholic School Board can the Kieffer pears harvested by the Garden of Eating – Niagara. Trust me when I say it’s delicious and something I’d reach for before apple sauce.

Place sugar, water and pears in large sauce pot, bring to boil then simmer until pears are tender.

Continue to simmer to desired thickness or add water to thin.

Ladle into sterilized jars and put in water bath for 10 minutes.