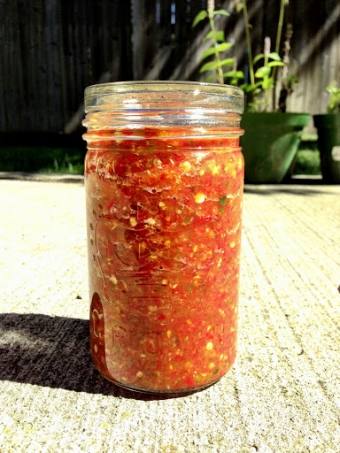 Under pressure of a deadline and filled with hunger pangs six years ago, I set out to can something. I had been abiding by the restrictive rules of the 100-mile diet for work and I had a column to write to update readers about my latest local food discoveries. I was in need of new material and preserving seemed the logical next step after my dismal failure trying to make yogurt. I also had a hankering for pickled beans, though I'd never preserved anything before. I didn't even own a mason jar and never used one for anything more than a drinking glass. Still, I set about to make me some pickled beans, doing what any canning virgin would do in my circumstances. I turned to the great Google gods for help. They didn't let me down, turning up an easy-to-follow recipe with seemingly simple steps for creating some briny beauties. I won't lie. I was scared of canning anything. The fear of botulism or some other food-borne illness stayed with me as I worked in my tiny apartment kitchen like an annoying editor hovering over me as I toil at my computer. I boiled the heck out my newly acquired mason jars to sterilize them, then carefully packed four of them with my neatly trimmed, lanky green beans, a flowery head of dill, clove of garlic and a hot pepper for good measure. Then, I covered it all in a hot vinegar concoction and placed a lid on top, careful not to touch the glass rim of the jar, lest I invite some bad bacteria to breed and plot to kill me later. Then into a hot water bath for 10 minutes for one last-ditch effort to ensure my survival after eating my handiwork. In the end, I had what looked like bona fide pickled beans, my column, and two weeks later, an indulgence as I sat on my couch and pounded back a jar of those sour, salty and spicy beans. I was hooked after that. This preserving thing was easy peasy and in the weeks that followed, before summer's harvests waned, I pickled carrots, made more beans and bought myself a bushel of tomatoes to sauce. In the years since, I've made a point of filling my now-massive collection of mason jars with the season's bounty. Jam, jelly, pickles, beet or cucumber relish, and my favourite, hot sauce, have all been weekend projects throughout the years. I even began dabbling in lacto-fermentation, signing up for a workshop to demystify the whole process of relying on bacteria to preserve my food. If botulism was my boss that day six years ago with those beans, it owned my soul when I set out to ferment something for the first time without the woman who taught me the dos and don'ts of such a method by my side. My first fermented beets bubbled, smelled earthy, and spilled brine over the edges of the mason jars I packed them in, and I thought I was doomed. I wouldn't have what some argue is a healthier alternative to heat-packing veggies, what with all that good bacteria to populate my gut and provide me with lots of vitamin B12. I'd just have someone eulogizing me and my valiant but failed efforts in the kitchen, closing with the caveat that we should all just go to the store next time we want pickled beets. Alas the fermenting worked. All it took was 15 minutes to assemble my beets and a few days in a dark corner on my counter before moving to my fridge. I had tangy ruby red shreds that were the stars of my winter salads and borscht. I've been hooked on fermenting ever since and this year, I decided to extend those efforts to a bumper crop of turnips before turning my attention to a pile of hot peppers in my CSA baskets that would not be humanly possible to eat my way through otherwise. I had everything from seemingly gentle jalapenos to bumpy, wrinkly, evil little demons whose Scoville units were ominously high. Think seven figures.

My mouth is watering as type that, though my stomach is churning just a little bit. I'll let you guess how the rest of my digestive tract might be reacting... Still, with a few jars of my vinegar-based, heat-processed hot sauce left from last year, I found a recipe online that combined the best of fermenting and tempered it with the addition of vinegar. It was pure peppers, salt and vinegar, sans hot water bath. But with a ghost pepper and its million-plus Scoville units carrying my team of CSA peppers, the instructions at hand needed some modification to make the sauce more palatable, thicker, and less likely to make my insides quake. And it also had to be a prime candidate for this month's food experience project task of preserving. The results? Well, this is still some seriously hot sauce, but more than heat, it's got flavour (I made two separate batches just to be sure) so at least burning my butt off will be somewhat enjoyable.

Pulse all veggies and salt in food processor until you have a fine purée.

Place in a sterilized one-litre mason jar, loosely screw on lid and let sit on your counter at room temperature for 24 hours.

On Day 2, add vinegar, leave lid loosely screwed and continue to let sit at room temperature for up to a week.

Then store in fridge for up to four months.

I like a thicker sauce, so I didn’t strain mine, but if you prefer a thinner sauce, break out the sieve and strain.