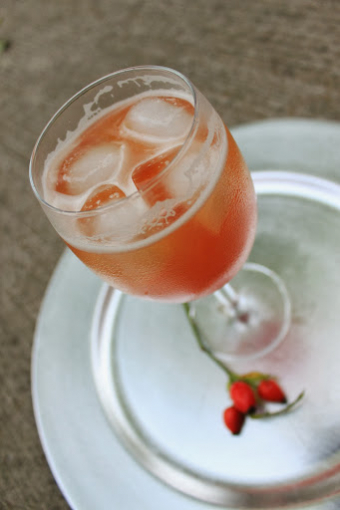 Rose hip cordial is easy to make and packed with vitamin C. Rose hips are easy to find in the wild and in backyards, and even easier to harvest.

A good friend of mine once joked that she'd never worry about me going hungry should I ever find myself homeless. She was spurred on by my boasting of finding more wild purslane spreading over someone's lawn or crawling out of a sidewalk crack. It's no secret I love to forage and though I'm still learning a lot about wild edibles, I do love being able to go for a walk anywhere in this city and spotting something to eat that others pass over or write off as pesky weeds. Still, while the mean trails and sidewalks of St. Catharines might be no match for my stomach, homelessness is a fate that scares the hell out of me. I have the security of a regular pay cheque and a home that I own. I have a husband with a regular pay cheque, too. And family nearby if need be. But this week, I came face to face with dozens of people who aren't so lucky. Long on my list of places to visit, San Francisco was our holiday destination this year. I have dreamed about seeing the Golden Gate Bridge, standing among the redwoods, riding a cable car and eating Rice-A-Roni, where it's apparently a treat, since I was a child. And last week was finally my chance to do it all. What I didn't expect to find in a city I had built up in my imagination as one of the greatest places on earth was the in-your-face homelessness and poverty that I've never seen anywhere else. Not Toronto, not New York and nowhere in Europe. There was hardly a street corner we could walk past without a hand or cup out, a shame-faced person, eyes cast downward, not speaking a word but holding up a hand-written sign asking for money for food. Some struck me more than others: the woman with no legs, probably no older than me, sitting in a wheelchair on the corner of O'Farrell and Powell, her dog sleeping loyally under her chair. Her clothes were dirty, her eyes fixed on the sidewalk, sadness shrouding her. We walked into the nearby Walgreens and bought her a ham sandwich and some dog food and haven't been able to get her out of minds since. A young man, clean and neatly dressed, handed out tiny blue paper cranes on that same corner a few days later in exchange for a few coins to buy his next meal. What was his story? Was homelessness new to him? Had he not been on the streets long enough for his jeans to get stained, to get the city's grit embedded under his nails and stuck to his skin? One man, standing outside the BART station at the base of Powell Street, became a familiar face to me after a few days. With a stack of Street News papers in his hand, he greeted commuters with a hearty good morning, you're looking well today, and would you be willing to support ending homelessness buy buying a paper?

He was ignored. His words and cause entirely unacknowldeged. Then he turned to me. I apologized and said I had no cash — words that rang hollow as I spoke them, even if they were true. This time, I was the one with my eyes downcast and feeling shame. With his stocky build, salt and pepper beard and radio announcer's voice, he reminded me so much of my brother-in-law. All I wanted to do was give him a hug, give him everything I had, had I actually had anything to give. I set aside a few dollars the next time I visited a bank machine and kept my fingers crossed I'd see him one more time so I could buy one of his newspapers. Fortunately, on my last day, another meeting was in the cards. "I'm having a really tough day today," he told me as I handed him my money. I can only hope that maybe that brief exchange was the start of something easier for him. On our second-last night in town, I turned to my husband and asked "You know what I want to do after supper?" "Buy sandwiches," he answered. The man is my soulmate, a mind reader. Anyone asking us for money was offered ham or turkey instead. Though I'm sure it did little more than make us feel better, we were never turned down and thanked repeatedly. I've been home a few days and I still can't stop thinking about the people we encountered, wishing there was more that could be done, wondering why more wasn't done, tearing up as I thought about my borhter-in-law's doppelganger possibly going ignored another day. I don't really understand why, in a society with so much wealth, there are people who have to beg for the absolute basics in life.

The day after we got home, I found myself on one of my wild food-laden trails and relished at the discovery of new crop of rose hips. I love these berry-like seed pods left behind the sweet-smelling blooms that have vacated their posts with summer. Packed with vitamin C, a beautiful tartness and floral scent, they are a prize find, especially after a frost turns them soft and pulpy — perfect for preserving in some way. It was like a windfall when I found one stand with softened hips, ready to be topped and tailed and turned into something that would make fall's arrival more bearable. I picked a few handfuls and plotted some quickie syrup-making sessions so I could sip hip cordial this weekend. As I gently plucked rose hips from their thorny stand, I thought of my friend's words and how much I laughed when she made her crack. I didn't have a single worry about my own situation. Now I have plenty of worry about others'.

Place rose hips and water in a pot and mash with a fork or potato masher until hips are broken apart. Bring to boil over medium heat, breaking up larger hip pieces as they soften further from cooking.

Strain through a fine mesh seive, cheesecloth or jelly bag, ensuring all seeds, which can irritate the stomach are removed.

Return liquid to pot, add sugar and bring to a boil over medium heat again. Reduce heat and simmer, stirring constantly to thicken slightly (about five minutes). Be careful at this point because the delicate mix of hips and sugar burns easily, a mistake I’ve made when making jelly.

Pour syrup into sterilized jar and store in fridge for up to a week. Makes roughly one-250 mL jar of syrup.

Add two tablespoons of syrup to a wine glass, add ice and cover with sparkling water or club soda. Stir and enjoy..