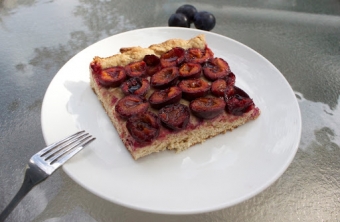 Zwetschgenküchen, or German plum cake, is a classic German treat come late summer. Every region seems to put their own spin on it. Here's my family's take, inspired by my mother's Schwäbisch roots.

Something about the words 'Canadian recipe' just don't compute with me.

I mean, what the heck is that? Other than tourtiere, poutine or pemmican, I am at a loss to think of a truly Canadian recipe that hasn't been influenced by another culture.

Add the word 'cherished' to mix and ask me to pen a post about it and my reaction is simply 'gulp.' That's exactly what happened when I saw that this month's instalment of the Canadian Food Experience project was to write about a cherished Canadian recipe. I am the child of German immigrants. Every recipe that really means anything to me comes from a land known for its beer, punctual trains, and engineering. Rouladen, Zwiebelrostbraten, Sauerbraten, my Oma Mayer's Sauerbohnen and Zwetschgenküchen — none sound particularly Canadian and yet all of them are cherished by me.

Still, after panicking, I realized we are a nation of immigrants so as far as I'm concerned, a recipe for Zwetschgenküchen is as Canadian as it is German. And so I'm writing about Zwetschgenküchen — my favourite cake — a German plum cake that would be a fixture in all the cafes over there right now, or in my Oma's kitchen, had another plum season been in the cards for her.

I have memories of my aunt standing in her backyard in Zweibrücken, pitting and halving blue plums — damson or the Italian prune plums — which she would then line up like soldiers standing at attention on a sweet, yeasty, pizza-like crust.

Or my mom, hovered over the kitchen counter of the house where I grew up in Kitchener, trying to decipher the cursive German typeface of a stained Second World War, government-issued cookbook as she rolled out the dough onto a baking sheet. It's a cake that represents summer's final hurrah before passing the baton to fall, and one that makes the season's last sigh a little more bearable for me.

Whenever I travel to Germany at this time of year, I make it a regular afternoon ritual to take a seat at a sidewalk café and order a slice even though blue plums are plentiful here right now and I could enjoy this treat closer to home.

"Zwetschgenküchen, bitte," I say with an eager smile. It's one of few things I can actually pronounce with some confidence in a language I regret never mastering. Sometimes, it's like a plum pizza, cut into squares, the whipped cream optional. Other times, it's a party hat-shaped piece of cake, with or without a streusel topping. No matter what form it takes, depending on the region, the recipe and the maker, Zwetschgenküchen is perfection, really, with juicy plum in every bite — the flavour of the fruit's sweet flesh kept in check by its tart skin. Every forkful is pleasure, save for the last one when the experience ends.

Thank goodness for seconds or the courage to finally make it myself because of the pressure of having to come up with a cherished Canadian recipe. As I worked away on my first Zwetschgenküchen during an insomnia-fuelled baking session, with damson plums I harvested for the Garden of Eating — Niagara, I imagined my Oma there with me, overseeing everything I was doing and making indecipherable guttural noises at everything I might be doing wrong. She wouldn't show her disapproval so willingly to be mean. She was someone for whom precision and perfection wasn't an option. Baking, cooking — it all just seemed natural for her and so she'd be critical to be helpful.

Maybe it seemed that way because in her 100 years, she had much practice and time to get it right. But I'd be willing to bet her first Zwetschgenküchen, whenever she may have baked it, was flawless. She didn't make mistakes in the kitchen. Me, not so much. I could see her taking a bite of the end result, telling me it needed more sugar or the crust was maybe just a bit too thick. But then she'd take a sip of coffee to wash it down and look over at me, smiling, letting out a soft chuckle that revealed her pride in her Canadian granddaughter making the effort to learn how to make German plum cake. Then she would just enjoy the last few bites, cherish it perhaps, because that's what one does with Zwetschgenküchen.

My mom translated this from her Second World War cookbook, as you can tell from the wording, which I’ve left as is because it all seems so German (and Canadian) to me. I omitted the breadcrumbs on top of the plums when I made mine.

Ingredients For the topping

With a pastry blender, cut the butter into small pea sized bits into the flour.

Put the yeast in the milk and heat to lukewarm to dissolve it.

Add the sugar, salt and the milk with dissolved yeast to the flour mixture.

Work the dough with a spatula or your hands until it starts to form bubbles.

Let the dough sit for 30-45 minutes in a warm place before rolling it out on a floured board to thinly cover a cookie sheet.

Instructions For the topping

Cut the prunes in half to get rid of the stones.

Make a slit part way down each half, so as to be able to open the half and flatten.

Sprinkle the sugar on top of the prunes in a bowl and let stand for about 15 minutes.

Then lay the prunes on top of the thin layer of dough on the cookie sheet which has been sprinkled with the Zwieback crumbs or fine bread crumbs.

When the cake bottom is completely covered with prune plums, you can sprinkle lightly a mixture of sugar, with a little cinnamon and some more bread crumbs over the entire cake (very little is needed, it is not going to be a heavy streusel topping).

Top with tiny little pieces of butter randomly spread over the cake.

Keep an eye on it. Remove, cool and enjoy!