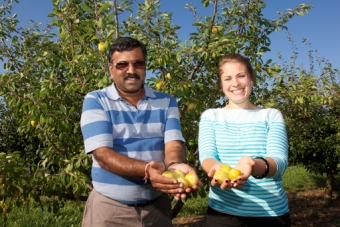 Bet you're imagining one of those black, shrivelled sticky things that your grandparents ate, you know, to keep things on track. If you live in Niagara, at this time of year you might be envisioning the fresh version: those oblong purple goodies that are the last of the summer fruits before apples fill in the vacancies left behind by peaches, nectarines, blackberries and every other good thing that summer brings to local farm stands. Now try to imagine yellow prunes, dried or fresh. It's not a stretch for one man, Jay Subramanian, a tree fruit breeder at the University of Guelph who is based at the Vineland Research and Innovation Centre. He also happens to be my favourite fruit scientist. Jay has spent the last eight years breeding new varieties of yellow plums to complement those already grown in Niagara, extending the season and availability of a local favourite fruit that he sees having the potential to be loved beyond Niagara's borders, too. I first met Jay several years ago while working at the local daily. Our introduction came over the phone when I was hammering out a story on a new variety of canning peach called Venture, which was developed at the Vineland. Venture was nominated for seed of the year it was that good. But not good enough to spare the blow that would come to Niagara one year later when the last fruit cannery in Canada, CanGro Foods in St. Davids, shuttered and shipped production overseas. The Venture, as golden as it was, never ended up taking root in any local orchards as a result —a winning peach made a casualty of globalization and cheap labour.

Still, Jay appreciated my interest in all things agriculture and I was captivated by the amazing work he was doing at Vineland. So whenever the opportunity arose to write about him, I made sure those were some of my best pitches in our newsroom story meetings. When it comes to the fruit breeding he does, Jay is like a worker bee out in the orchard, hand-pollinating thousands of blooms, which — after scrutinizing the results and putting them through growing and taste tests — may result in only a couple of viable varieties worthy of growing on a large scale. Right now, Niagara grows two varieties of yellow plums. They're Japanese varieties — shaped like a golf ball — called early golden and Shiro. But Jay is adding to the repertoire, with seven new varieties of one of my favourite fruits. In addition to developing a new variety of Japanese plum that will be ready for large-scale planting in local orchards next year, he's also working on perfecting seven new varieties of yellow European plums. European plums are those oblong editions that are also known as prune plums. The fruit, he has found, is packed with as many antioxidants as its darker-skinned cousins but lacks the slight bitterness that lingers after eating a blue or red plum. The yellow European plum's fair colour also makes them more appealing when dried than those black things. And calling them YEPs instead of the mouthful yellow European plums means they're just as sweet to market to young fruit eaters as they are to eat. Jay's hope is that drying some of the fruit he's developing will help rebuild the region's fruit processing presence after CanGro's demise. But adding more plums to the Niagara fruit basket and perhaps creating a new local industry isn't the only reason why he's a hero. He's also a mentor to many young scientists, having taken high school whiz kids under his wing to do the kind of science projects most people need a university a degree to even fathom. Think using geraniums to rid soil and water of toxins, such as lead, or using antioxidants to help food plants grow and use fertilizer more efficiently so less nitrogen-based fertilizers leach into soil or water. It's impressive work that has landed his proteges scholarships and trips to science fairs around the world. Feeding us more healthy, local fruit, feeding young minds — sounds like a regional food hero to me. The Canadian Food Experience Project was started by Edmonton-based food blogger Valerie Lugonja, who has called on Canadian food bloggers to define the country's culinary identity by sharing their Canadian food experiences.