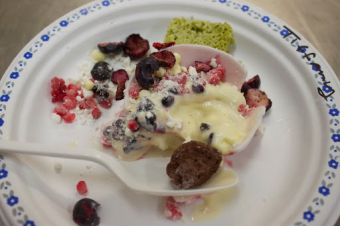 Until I was 14, I was determined to be a veterinarian when I grew up.

I loved animals more than anything, really. Then my childhood dog, Bismarck, died and I began rethinking my career plans. I didn't have it in me to euthanize an animal so it was time to aspire to another dream career. Had I been paying attention, though, I would have seen the signs sooner — say in Grade 5 when my mom sent me to science day camp at the University of Waterloo. Most of the time, I had no idea what anyone was talking about and my days were spent wishing I could just go home and play hide and seek with the rest of my friends. There were kids at science camp who were a bazillion times smarter than I was. Brilliant minds who said things that sounded like they were speaking in tongues. I was the one perpetually confused. Bewildered. Brow furrowed. Still, I do have one fond memory of science camp. It was a workshop we did with liquid nitrogen. Some science guy with flint grey hair that refused to stay in place and pop bottle-thick glasses would put all kinds of objects into this super cold liquid that would bubble like a witch's cauldron. Then he'd smash the liquid nitrogen-soaked stuff and simple, uncomplicated me marvelled. Even the really smart kids were enamoured as the guy with crazy hair and bug eyes shattered frozen rubber pipes, and turned soft, chewy white bread into something that crunched like croutons when he chomped on it. I felt like that kid in Grade 5 science camp again recently when I took a liquid nitrogen ice cream workshop at Willow Cakes and Pastries. It was led by John Placko, chef and mastermind behind Modern Culinary Academy, a popup, roaming educational enterprise that teaches other chefs and the curious about molecular gastronomy.

I've followed John on Twitter for a few years and more recently on Instagram where I've been fascinated by some of his creations, including aerated green tea white chocolate terrine (turns out it tastes like an Aero candy bar, though it looks like a kitchen sponge), freeze-dried licorice, coconut snow and pineapple glass. It all seemed so high-tech and, at times, like a weird weather system or haute home decor more than food. John, who teaches at Humber College's culinary program, was first introduced to molecular gastronomy in 2006 when he attended the Worlds of Flavor conference hosted annually by the Culinary Institute of America. The headline chef for the event that year was Ferran Adria of the renowned and now-defunct El Bulli restaurant, once the bastion of emulsification, spherification, gelification and all other -ifications of molecular gastronomy. "I was totally fascinated by the equipment, ingredients and techniques that Ferran was demonstrating along with the other very talented chefs from Spain," John said. "Ever since then, I've been educating myself by reading, acquiring the equipment and then I began sharing my knowledge with students, as I teach the subject at Humber College, and to professional chefs and pastry chefs." Still, learning the techniques "was like starting your apprenticeship all over again" for a guy whose CV is a long list of impressive kitchen gigs in Australia, Mexico and Canada. Through his Modern Culinary Academy, he also shares his knowledge with people like me — far from professional, but lovers of food and curious about edibles called snow or glass.  Molecular gastronomy is so unlike anything I've done in my own kitchen — or eaten anywhere else for that matter — that I didn't hesitate to sign up when I heard John was hosting a liquid nitrogen ice cream workshop in Niagara. There was no science camp anxiety. Only happy memories of crazy science guy and the anticipation of seeing something edible made with the help of something that, I won't deny, is just a little scary. If anyone of us spilled a bowl of liquid nitrogen on ourselves, "it would be like if you had spilled boiling oil from a deep fryer." I quickly reined in my inner klutz. But then came another caveat as John threw some freeze-dried berries into a bowl of the clear liquid, which formed a veil of smoky steam that spilled over the edges like a long, flowing train on a bridal gown. It was like a special effect from a 1950s horror movie. We all leaned in for a closer look, fascinated and enthralled, like I remember my science camp mates doing way back when. "At -196°C, you can't put anything in it with moisture, otherwise (when you eat it) you'll get frostbite on your tongue," John explained about the need to use freeze-dried fruit with his muse. Don't bother taking liquid nitrogen for a ride on an elevator, either, because it will draw all the oxygen out of the air and you'll be doomed.  But, John stressed, home cooks can use liquid nitrogen in their own kitchens. They just have to ensure they follow all the safety precautions required. That, for me, is leaving it up to highly trained professionals like John to use and then feed me the results. It's also pricey, which means most people aren't going to want to come home from work and just whip up a little something with their liquid nitrogen stash. One litre is about $8 and we used a fair bit of John's 10-litre jug to make our creamy concoction. Despite instilling our group of 10 budding molecular gastronomists with a healthy respect (a.k.a. fear) for liquid nitrogen, we all oohed and ahhed as the liquid bubbled and steamed and then turned out the smoothest, silkiest, best — yes, the best — ice cream I've ever eaten. The reason it's the best: liquid nitrogen is so cold, it prevents the formation of large ice crystals in the cream, which can affect the frozen treat's texture. That was the whole point, John explained later. He wanted to show that liquid nitrogen makes the world's best ice cream.

But we also made passion fruit jelly with John's wife and co-teacher Judie. Then we dipped it in chocolate and solidified it with a quick dip in liquid nitrogen. We made perfectly rounded raspberry coconut bowls, their formation aided by, yup, a few swishes and swirls in liquid nitrogen and then placed in the freezer "to warm up" so we could eat them. Cooking — or freezing  — food like this isn't something John does merely for show, however. At home he's constantly testing recipes using all the molecular gastronomy gadgets in his cupboards, including a Thermomix, dehydrator, Pacojet and his sous vide water bath. "And then sometimes, I'll just make a bolognese sauce the traditional way or pan-fry a schnitzel," he said. Here's the thing about liquid nitrogen: it looks cool but might not sound appetizing to some. But it's not unnatural by any stretch. Nitrogen makes up nearly 80 per cent of the Earth's atmosphere and is a part of every living organism. "Almost everyone goes goo-goo over the visual appeal and cool mist of liquid nitrogen, from little kids to the elderly," John said. "I haven't received any criticisms so far when demonstrating liquid nitrogen but if I did, I would explain that the dry, gaseous air that we breathe contains approximately 78 per cent nitrogen." And despite being a staple of modernist cuisine, it's use in the kitchen is actually an old technique, he noted. The culinary use of liquid nitrogen is mentioned in a recipe book from 1894 called Fancy Ices by Agnes Marshall. Cool. I'm convinced of its merits. In awe, in fact. Just don't expect me to change my career plans again any time soon. (John returns to Niagara on Sept. 14 for a popup liquid nitrogen ice cream parlour at Pillitteri Estates Winery. I think you should go).