Writing the book on Niagara 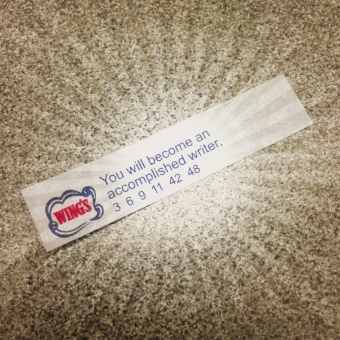 I got this fortune with my lunch shortly before an email arrived with an opportunity I couldn't resist. Fingers crossed it's true. Otherwise, I'll have to try my luck at those lottery numbers.

Eggshells would have been doomed a few weeks ago if I had to walk on them.

My feet were heavy, weighted down by leaden thoughts that kept me preoccupied every step I took.

That week, about the middle of July, was one of those stretches of time I wished had just passed already, even when it had barely taken its first few breaths.

A puzzling fallout with someone I had long thought the world of. Job cuts at work. The loss of a cornerstone to my freelance work. Seeing talented people lose their jobs. The resulting tension at the office and elsewhere. The anxiety created by the uncertainty ahead.

And of course Mother Nature just added to this pile-on with an overbearing heat that felt like I was the lead singer of an opening act at a summer concert and some hooligan whipped a can of Bud at my chest. It could leave a person winded during those first breaths outside of the climate-controlled comfort of the great indoors.

And yet, there were those moments that came along like a life preserver, offering to keep me afloat; a lifeline here and there to pull me out from underneath that pile of awfulness.

There was the offer of apricot, plum and walnut trees for the Garden of Eating — Niagara. All of them firsts for a group of weekend warriors, all of them giving me a sense of purpose during a week whose point eluded me.

An unexpected, unsolicited kind word would come along. I'd cling to those for dear life in hopes of keeping the other stuff out. But then I'd revert to feeling like a human Eeyore again because I couldn't quite quit the habit I have of ruminating about the bad and feeling meh about everything.

But it was eight words in particular that caused me to put an old cliché on heavy rotation — the one about doors closing and others opening. I wanted it to drown out the other thoughts that had been sounding off at a million decibels.

"You are going to make an amazing author."

They showed up in an email from a woman a thousand miles away, someone I'd never met before and someone whose first contact with me weeks earlier had me thinking my email inbox had been spammed.

Her name is Katie Orlando and she works as an editor for the History Press, an independent publishing house based in the U.S. and U.K. She had been reading my blog — this blog that I had long felt was being neglected — watching what I had been doing for months and she wanted to talk to me about the possibilities of writing the book on Niagara food as part of the History Press's American Palate series.

I waited before responding. Googled during the frequent breaks at work that I couldn't help myself from taking. Read excerpts from other books in the series before the mighty Amazon decided I could put up the money if I wanted to read more.

The History Press was legitimate. The message didn't read like spam, only as something too good to be true. I wrote back flattered and curious. Conversations followed as did lists of ideas that spilled onto several pages, a rough outline and finally a formal pitch before I got the nod to write 40,000 words on Niagara, a place for which this website is a love letter. Those words will be published next year.

I'm entirely nervous about the months ahead, the weaving together of a story that actually does justice to a region that is unlike virtually any other when it comes to food and farming in Canada. And yet, I'm giddy. Writing a book has been a dream of mine since I was in Grade 1 and could comfortably hold a pencil that I would use to write a tale inspired by the latest pile of books I'd taken out of the school library.

It's why I went into journalism. I just wanted to write and what better way to pass the time until I published a book than by writing to fill the pages of a newspaper. To be honest, when I told my high school guidance counsellor I wanted to write a book when I grew up, I had visions of giving birth to the next Holden Caulfield through the words I'd put to paper.

Instead, I'm writing about something that I am entirely passionate about and which fascinates me as much as when I first told my editor I’d like to cover agriculture at the St. Catharines Standard eight and a half years ago.

And I am entirely honoured. I only hope I do it justice.

“You will make an amazing authour.”

My fingers are crossed. I will keep that email within reach these next few months. I’ll print it so it can become dog-eared in the months ahead, and ink, tea and food-stained. I will bore holes into that paper when I stare at it intently in those moments when writing feels like an impossible task because the words just don’t want to come out, like ketchup from a new bottle.

Whatever. I know they’ll be there in the end and I can’t wait.