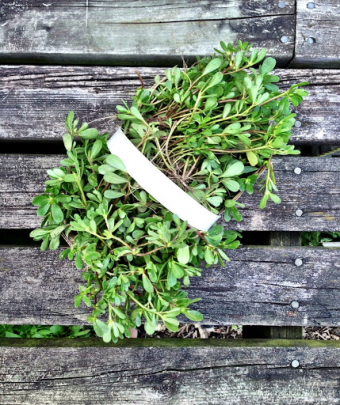 My name is Tiffany and I am a weedaholic.

There's a reason for that, not the least of which is they taste good. But when you're purslane, not only are you pleasing to the palette, you're super healthy, so the benefits of dining on this garden gift are seemingly endless. It is the misunderstood superfood, often landing in the compost heaps of annoyed gardeners when it should be landing on dinner plates, given it has more omega-3 fatty acids than just about any other edible plant. These are fatty acids that are good for heart health. Antioxidants? Purslane is packed with them. Vitamin A to help keep you seeing clearly? Purslane has nearly every other leafy green vegetable beat. Did I mention how good it tastes? Think a slight lemony kick. Refreshing, really. It sounds rather perfect. But depending on your perspective, purslane does have one downfall. It's prolific. It knows no bounds, creeping its way all over Grackle Garden, the patch of earth I'm sharing with my friend Rowan, to the point where it looks like we're running a purslane farm. So it is for this reason that the Great Purslane Giveaway returns for 2013 after having amazing success last year. I'm not the only one who loves tasty weeds because I had several people take me up on a bagful of this succulent sweetheart. Purslane, also known as pursley and by its less appetizing moniker pigweed, is hugely popular in Mediterranean diets.

Turks have no shortage of great salads they make with it. They even bake with it. But if neither of those appeal, how about purslane pickles? My point is, the world needs to eat more purslane and so to help do that, if you live in St. Catharines, Thorold or Niagara-on-the-Lake, I will bring you purslane from my garden. Not only will you be doing me a favour, motivating me to yank my purslane plantation to give more room to my tomatoes and peppers, but you'll be giving your taste buds and body some serious love by eating the stuff. If you want some, drop me a line at eatingniagara@gmail.com or tweet me @eatingniagara and use the hashtag #GPG2013 (I'd get a kick out of purslane trending on Twitter) and I will hand pick and hand deliver the most delicious weed you'll ever eat, right to your door.