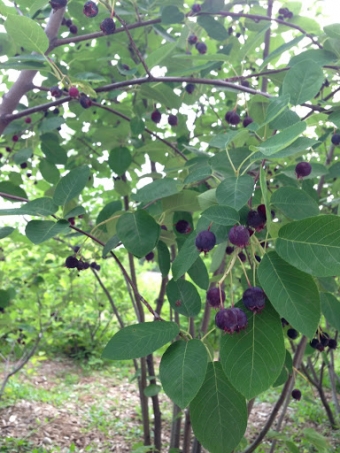 My previous boss was a good soul.

Knowing how I eschewed grocery stores and occasionally found the makings of my meals in a nearby forest, she would often send me links to stories about foraging adventures gone awry. You know, the ones about the poor schlep who decided to go mushroom hunting sans guide, using sketchy information to determine whether their find was edible, only to result in a tragic ending.

We shared an office and if time and circumstance allowed, sometimes she'd spare me the trouble of opening another one of her emails and just read the news story to me instead.

"Tell me you won't eat a mushroom unless you know for sure it's not poisonous," she'd press me afterward. If I came down with a stomach illness, she'd grill me about what I'd eaten and whether I bought it or found it growing along a pathway somewhere in the city. We'd laugh about it and I'd promise her I'd never be a candidate for a Darwin Award, knowing everything she did came from a place of concern.

Still, I was certain I wouldn't get sick from foraging. I never put anything in my mouth that I don't recognize with certainty. And that rule of thumb has worked for me so far.

But eating a bad mushroom, leaf or tap root is clearly the least of my concerns.

As I sit here with a smooshed cotton ball taped to the crook of my elbow, plants aren't to be feared. It's those who live among them that I need to worry about.

Yup, last week, while harvesting serviceberries, I was bitten by a mosquito or two. Or three. OK, I may have lost count. Granted, those blood thirsty bugs also made me their all-you-can-eat buffet under a mulberry tree.

For the past two days now, I've been headachy, clammy, and flitting between overheating and feeling like I live in an igloo. Nausea comes in waves while the lethargy lingers.

"Maybe I have West Nile virus," I half-joked to my husband. He didn't laugh. Instead, he insisted I go to the doctor, who, after hearing me out, checking my vitals and noticing my swollen lymph nodes, insisted I get blood tests done.

So now I wait, hopeful this yucky feeling I've had for the last 48 hours will be the worst of it but confident that even if it is West Nile, my immune system will show it who's boss.
Looking at the bright side, I did get serviceberries out of the deal. Sweet, deep purple serviceberries.

The doppelganger for a wild blueberry is plentiful right now in these parts and there is a virtual plantation of serviceberry bushes where I work. How could I resist when I walk past them every day on my stroll from the parking lot to my desk. It's like dangling a carrot in front of Bugs Bunny.

Sometimes known as Saskatoon berries, serviceberries are like the tomato-tomahto among urban gleaners. I've heard both names used interchangeably and have used them both myself. It wasn't until a friend pointed out that while Saskatoons are serviceberries, not all serviceberries are Saskatoons. Now try finding a source online to tell you the difference and I guarantee you'll be left thinking it's OK to call them one and the same.

Oh Internet, you dubious source of information. Thank goodness for my trusty foraging handbook to set the record straight. But unless the berries introduce themselves by their Latin names, it's tough to tell the difference between a red-twigged serviceberry (Amelanchier sanguinea) and a Saskatoon (Amelanchier alnifolia).
With others native to Ontario, such as the Canada serviceberry (A. canadensis), it's their hairy or fuzzy leaves that set them apart from a Saskatoon, and whether they grow on a tree or bush. (Saskatoons are bush berries).

But they all boast high levels of antioxidants. All are equal candidates for use in pemmican or pie. And all can be perfect places to harbour mosquitos.
While I don't know whether I harvested red-twigged serviceberries or Saskatoons, I do know they tasted good. Solidly good rather than blueberry delicious. I know there are those who will argue with me that Saskatoons, serviceberries — whatever you want to call them — are better than blueberries but my taste buds politely beg to differ. There's nothing to rival the sweetness of a ripe serviceberry, but what they have in sugar content, they lack in interest.

They don't have a blueberry's multiple personalities of sweet and tart, which keep eaters guessing at what they'll get until they bite down and experience a flavour explosion. And if you pick a serviceberry/Saskatoon before they're perfectly ripe, they're unpleasantly seedy and get stuck in your teeth.

Now before anyone accuses me of badmouthing the serviceberry/Saskatoon, know that I did pick nearly 10 pounds, some of which I donated to a local shelter to enjoy. And any co-worker I could convince to try them — and harvest some for themselves — I did. I even left a quart basket for my current chocolate chip cookie-loving boss to fill up, though it sat on his desk collecting dust bunnies instead.
Trust me when I say the serviceberry has my respect, so much so that I'm sitting here with a bandaged arm from which three vials of blood have been taken to be tested for a virus that has been known to kill. Hmm... maybe instead of espousing the merits of the serviceberry, I should be working on an acceptance speech for someone to read on my behalf at the Darwin Awards instead.
Editor's note: If you want to eat Saskatoons without having to harvest them yourself, Bluemin' Acres in Niagara-on-the-Lake sells frozen berries that they grow.
Nokara Farms and Whitty Farms Market also sells Saskatoon berry pie.

Mix berries in a bowl with sugar, honey and lemon. Set aside.

Line baking sheet with parchment paper and roll out dough.

Place berry mixture in centre of dough, leaving about an inch and a half of dough edges exposed.

Fold in dough edges, starting with a corner, like a pinwheel, gently stretching it to cover the edges of the berry mixture.

Let cool a few minutes before serving. Cut like pie and garnish with mint, serve alone or with ice cream.