The Canadian Food Experience Project: A Niagara icon — the peach 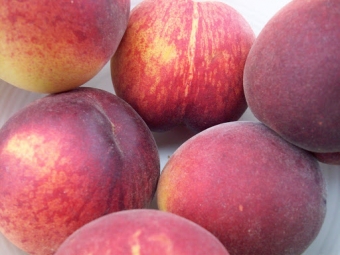 Really, it's one of the most erotic edibles. Anais Nin could write an entire series of her, ahem, rather charged short stories about it. Not convinced? How many peach fans have you heard gush about how there is nothing better than biting into the sun-ripened, tender flesh of a downy-soft orb, and having that sweet, warm, sticky juice dribble down their chin, or into hands before trickling to elbows, the flow of which they try to quell by slurping deeply? Pardon me a moment while I turn up the air-conditioning in my humble abode... I think you get my point. And how wonderful is it that Niagara is one of two regions in Canada known for growing such a luscious, lascivious fruit? In fact, Niagara grows more than 80 per cent of Canada's peach crop. To me, the only thing more synonymous with Niagara is rushing water. I live for peach season. Though I will rave about whatever is in season at the moment and feel like a kid in a candy store when something fresh is being harvested, there is nothing like a peach for me. It's the apple of my eye and has been my favourite fruit — my favourite flavour — since I was a child.

Straight out of the three-litre cardboard basket, with cream, as pie, fuzzy peach candy, peach scratch and sniff stickers, the peach schnapps that my parents would let me skim from their flute-like glasses under their watchful eyes — the peach is my true local food love. I adore a Niagara peach so much that I would never think of straying to those imports to help me through the dry spell between late August and mid-July when those first, most flavourful clingstones, once used by the local canning industry before it dried up, are ready to be harvested once again. I do remember one time, though, shortly after getting my driver's licence, when I was sent to the grocery store with my mother's shopping list in hand. It was winter and I didn't follow the instructions as closely as she would have preferred. There, in the produce section, was a pile of what I thought were the most perfect looking peaches ever. I bagged a bunch, so excited at the prospect of not having to wait until summer to enjoy the glory that is a peach. I brought them home and was immediately interrogated. Why did I buy those? Did I know it was February? How much were they anyway? Those peaches won't be good. My mom was right. They tasted awful — fishy, in fact. She made me return them to the store. I've never again tried eating a fresh peach outside of that short window when they are at their prime here in Niagara. Baby golds, red havens, you are gems. Some of the later varieties still coming off trees in September don't cut it, though. While I appreciate the efforts of fruit scientists breeding new varieties of peaches to extend the most wonderful time of year, those late bloomers don't compare to the fruit that ripens in late July and early August. They become mealy as the summer wanes, lacking that peach punch and totally void of erotic eating experiences. There is no juice running down chins, only disappointment spilling from lips. Still, these days, I'm giddy for what's just a couple of short weeks away: another peach season. Another few weeks of NC-17-rated tweets from locavores feeding the rest of us voyeurs their precious peach moments. Another few weeks of never having enough napkins on hand and of pure, utter bliss.

This recipe is inspired by my friend Sebastien, who swears by the combination of peaches and tuna. I just like my peaches straight-up. Still, legions are on Team Sebastien.

Mix tuna, mayo, walnuts, salt and pepper in a bowl and set aside in fridge. Light barbecue.

Cut peaches in half and remove pits. Brush flesh with grapeseed oil other neutral oil.

Place flesh side down on grill, over medium flame, and remove when fruit is tender and grill marks have appeared.