A week on repeat and rhubarb-ginger crisp 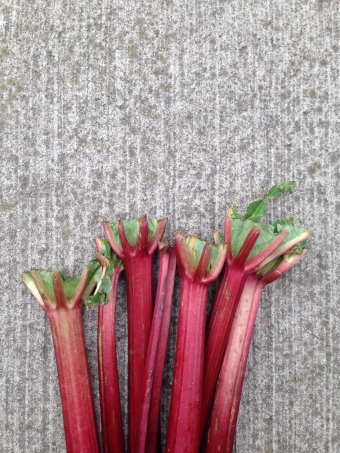 I channeled my inner Bill Murray last week, my days on repeat like Groundhog Day. It was covocation at work and having been designated the unofficial official university photographer in the last minute, I donned a Harry Potter-esque gown twice a day, grabbed my camera, sat, stood or squatted in the same location morning and afternoon, listened to the same speeches until I could nearly recite them and shot the same photos. For five days. There were eight ceremonies. Hundreds of photos. And then the words I had to write to go with them. The days were long. They were surprisingly tiring, too. And emotional. On Day 1, I felt the buzz of energy coming off 500 newly minted university graduates flow through me like an electric charge. I envied them, their new beginning. All the possibility laid out before them. On Day 2, I began to wonder what I'd do differently if I was 22 and graduating from university again. I took a tally of missed opportunities and regrets. Chided myself just a little bit for always being the polite, deferential  one in moments when perhaps I should have been more assertive. Would it have made a difference? I could only wonder as my mind drifted during those speeches I was hearing again. By Day 3 and ceremony five, I was tired. Tired of tripping on my oversized gown when I contorted myself to get the shot. Tired of doing the dance and jockeying for lens space with other photographers. Tired of the speeches and now-stale jokes. I kept myself entertained by trying to figure out which dean had the best gown and looked the least ridiculous. Humanities won (it doesn't hurt that the dean is a dapper gent even when not wearing what I heard eight times in five days was the height of fashion 350 years ago). Still, it got tedious. I was starting to feel grumpy, and like my butt had been kicked 10 times over every morning when my usual work to-do list was ignored for one more day and grew longer in revenge.

As my evenings got eaten up by finishing the processing of photos and writing my last words, my personal to-do list started growing equally unruly and I was becoming evermore surly. So when my yardsharing pal tweeted me one morning before doing it all over again that our turnips were being turned to mulch by flea beetles, well, that's when I became officially frazzled. Of all the crops growing in Grackle Garden, a patch of earth we were borrowing for another summer to put our greenthumbs to the test, I was most excited about the turnips. All I wanted were some $%&*@#! turnips. And now some microscopic bug was challenging me for them. Hasty plans came together to find a remedy, though I had no idea when to carry them out. I would do battle with the flea beetle, it was just a matter of when. That night after downloading my last photo, I stopped by Grackle Garden to survey the damage. The turnip greens looked like a well-worked over buffet. I was sure Grackle Garden was doomed when I looked to the other side of me and noticed three perfect plants of kale, their long, lithe leaves a deep blue-green. It made me smile. All wasn't lost -- not the garden (especially not the kale), and not my week.

At home, that feeling was reinforced by my discovery of forgotten local rhubarb in my fridge. The clock was heading toward bedtime, but I couldn't help myself after looking at those pink, red and green stalks. Rhubarb crisp was in order. Rhubarb crisp would be the antidote to a week stuck on repeat. While it certainly isn't as easy to photograph as graduates, and not nearly as photogenic as the fresh-faced hundreds of new entrants to "the real world," it was what I needed for those very reasons. Its sweet and tart flavours mimicked my feelings each day. What I really appreciated as I stuck a fork in my late-night concoction, with its rough-hewn rhubarb and crumbly topping, spread by a hand guided by imprecise eyeballing, is that no crisp ever looks the same, even when my work days do.

Combine brown sugar, flour, oats and cinnamon in a bowl. Add melted butter and mix with hands until crumbly.

Stir over over medium heat until sugar is dissolved. Bring to boil.

The liquid will thicken quickly once it does.

Remove from heat once it thickens slightly and pour over the rhubarb.

Top rhubarb with crumble mixture, spreading as evenly as possible.