The Canadian Food Experience Project: A tale about pigs' tails 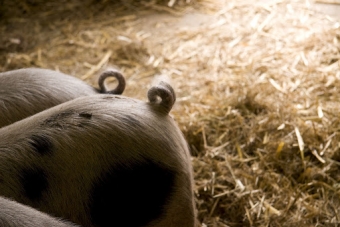 I remember the moment well when the proverbial wheels feel off my efforts to Assimilate with Albertans. It was dinner time and a handful of us university residence dwellers gathered for the evening's grub in the Lister Hall dinning room at U of A. As we hovered over our Melmac plates loaded with an overcooked vegetable, carb and protein — two carbs and a protein for all those farm boys I went to school with — we'd all clearly reached the threshold of tolerance for our assembly line meals. It was February so the doldrums were made that much deeper by piles of papers and mid-terms, near constant darkness, and an end of the school year that felt worlds away. We started talking about home — the food, mostly, though we longed equally for free laundry facilities. One of us started talking about their favourite Mom-made meal, probably something beefy, and then we all started spilling about the home cooking we missed most. We were awash in a tidal wave of fond food memories, our voices growing louder as we bonded in our agreement that yes, roast beef with horseradish would be really amazing right now, or as we held fast in friendly one-upmanship that one's Baba's cabbage rolls were better than another's. Caught up in the excitement of sharing, I blurted "Or how about some pigs' tails?" It was as though someone had yanked a needle off a record, interrupting the harmonious chorus with the cacophonous sound of scratched vinyl. All eyes turned to me, wide in disbelief at what I just said. "You eat pigs' tails?" someone asked in disbelief. "Yes. Doesn't everybody?" I replied hopefully. "That's disgusting. Why would you eat something that close to a pig's ass?" "Because it tastes good? You guys really don't eat pigs' tails?" That got me a round of ewww and ick, gross and ugh. And further confirmation that this "easterner," as they called me, would never really fit in with those "westerners" as I called them. I remember the moment as though it happened five minutes ago. That night on the phone with my mom, I needed to unload about these philistines surrounding me and told her that no one had ever heard of eating pigs' tails before. That's when she enlightened me that really, pigs' tails were a regional specialty, common only to Kitchener-Waterloo, where I grew up. The Pennsylvania Dutch fare had become as much a part of K-W's social fabric as Onkle Hans, our orange-headed Oktoberfest mascot, and the horse-pulled buggies jockeying for space amongst cars on a busy city street. Pigs' tails had become such a part of the way I ate growing up that it was easy to assume everyone else ate pigs' tails, too. Even the fine-dining establishment of my childhood had them on the menu. And I can still see the dark blue tins of Schneider's pigs' tails, sealed only by a few pieces of translucent freezer tape, that my mom would bring home from the grocery store. They were packed with cigar-shaped — and coloured — tails, each about six inches long, soaking in a brown sugar barbecue sauce. The fat on them was enough to make a heart health advocate's ticker skip a beat, but it would peel off easily, like a banana, revealing the most tender, sweetest meat ready to fall off tiny vertebrae. I can remember Saturday night pigs' tail-dinners at my parents' friends, one of whom found a butcher that sold thicker and less fatty tails than what those Schneider's tins held. I can still see the oven door opening, the lid being lifted off the roasting pan, the cloud of steam, the delicious smells that danced their way over to our noses, and those juicy tails being basted in a sweet-savoury sauce. We never bought one of those blue tins of Schneider's tails again, knowing that we could make our own tails better. Despite my mom's assertion that these were a distinctly Waterloo region dish, I'd still scour the meat sections in grocery stores in hopes of finding them. Only once did I luck out, scoring a foil tray of tails from New Hamburg-based Bar-X Foods while living in Simcoe (where clearly philistines don't live).  Otherwise, it was to no avail. It's been years since I've eaten one but pigs' tails are a food experience I hold dear to me, one that clearly defines a culinary identity for the region that shaped me, like prairie oysters and red eyes help define a place I once lived but never really felt at home. Alberta can have its calf testicles and Clamato-infused beer. This now-vegetarian knows that something that close to a pig's ass is really the bee's knees. Here's my mom and her friend's famous pig tail recipe. The Canadian Food Experience Project was started by Edmonton-based food blogger Valerie Lugonja, who has called on Canadian food bloggers to define the country's culinary identity by sharing their Canadian food experiences.