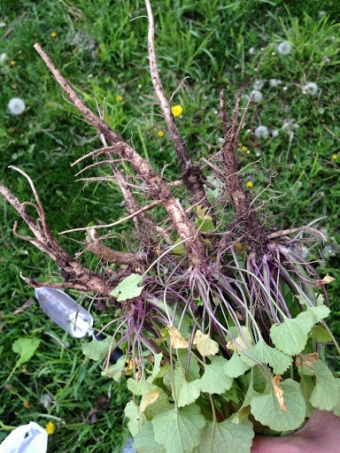 It pains me to admit this, but I experienced my first foraging casualty this week. No, I didn't feed my husband — or anyone else — a bad mushroom or toxic leaf. Instead, I killed my mini-food processor. I watched as it and some garlic mustard roots got their roles reversed and instead of the sharp, high-speed blades pulverizing the weed's tap roots, those tough bastards broke my blade to bits. I unceremoniously tossed the processor — one of my first kitchen appliances, donated to me by my mother eons ago because I couldn't afford, nor had the room for, a proper, large processor. It was a bitter good-bye made even worse by the fact that I had now wasted the evening harvesting, scrubbing and peeling the pointy roots and their tentacle-like offshoots only to have to chuck my handiwork and, well, my entire evening on the compost heap. And I had so been looking forward to the results, hot like horseradish with a garlicky kick, much like I'd sampled at a foraging workshop just two weeks ago. Thank goodness asparagus season has started. Mother Nature is a brilliant creature because just as the garlic mustard turns too bitter for my tastes — and its roots too unrelenting for my food processor — I can turn to feasting on lovely green spears and use my trowel for gardening now instead of unearthing my next meal. Still, for those keen to keep searching the wilds for dinner, there is lots to eat and enjoy. Burdock abounds (it's great stir-fired with soy and ginger). Dandelion is ubiquitous. There's wood sorrel, broad and narrow-leaf plantain, trout lily with its speckled leaves, motherwort, which looks like a wrinkly maple leaf, cedar and pine shoots, and mallow. Then there are those glorious and versatile violets, packed with vitamin C. Soon, mayapples will be ready, too. Good news is, only five per cent of all plants are toxic — one per cent are deadly — so unless you find a tap root that's tougher than a tree trunk, the odds are in your favour of everyone and everything coming out of your foraging experience a survivor. "You're more likely to find something toxic in your house than outdoors," says Jackie McMillan, who led the foraging workshop at Little City Farm, an urban homestead in Kitchener, where I sampled the garlic mustard horseradish a couple of weeks ago.

This was the third workshop I've taken with Jackie, the second about foraging. Jackie has used wild foods to help deal with the challenges of her autism. She stir-fries, steeps, dehydrates, ferments and preserves her finds to eat year-round for high nutritional value. Hers is a remarkable story and while she advocates for people getting to better know and appreciate the plant life around them, she's not one to encourage a newbie forager to gorge on dandelion if they don't make a habit of eating wild edibles. "Because wild foods have so much more nutrient value (than farmed foods), you can hurt yourself with them," she warns. "With that higher nutrient density, you're crossing the border between what is food and what is medicinal." Turns out, eating too many wild foods when you haven't made them a part of your diet previously can cause a "healing crisis." Your body "shuts down and puts all the nutrients it gets into healing," Jackie says. "As you get more into your wild food adventure, your body gets better and better at telling you what it needs or doesn't," she adds.

So go for diversity and also be mindful of how much you take, especially with over-harvested or sensitive finds, such as ramps. The rule is typically to take no more than one-fifth of what you find, but when it comes to ramps, I'd even suggest giving them a break for a year. Too much has been written about how poor foraging practices have jeopardized this tasty and easily identifiable wild food in different regions. Over-harvesting other wild foods, such as grape leaves, could mean a plant won't fruit, so start with only taking one in 10 leaves until you get to know a plant. Or instead, go for garlic mustard (maybe not the roots), which is an invasive species. It has a nasty habit of not being a good roommate in the eco-system, choking out other greenery, so go nuts when harvesting. You're doing your civic duty, really. Pesto, salads, and stir-fries are all good uses for this healthy leafy green. Dandelions are another weed that you harvest almost with abandon. Roots can be used for tea, while leaves can be dehydrated and used as soup-topper, or sautéed in a bit of veggie or chicken broth with garlic and a sprinkle of dried chillies. Just avoid "hunting" in areas that are sprayed or near roadways so you avoid ingesting toxins with your wild finds. And be careful what you put in your food processor.