A Sappy Tale: All in favour of waffling 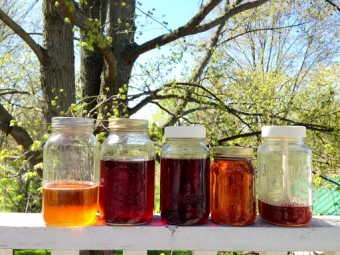 I never really got the waffle.

Other than munching a toasted Eggo in all its cardboard-like glory on the drive into work on days when my love affair with my pillow prevented me from eating a proper breakfast, I never really got why people would want to eat them unless for a perfunctory bite to start the day.

At breakfast spots, I'd hardly notice them on the menu, skimming over the strawberry-topped, crispy grids to get to the good parts. The pancakes.

Yes, in a battle between breakfasts made of batter, I choose pancakes.

Topped with butter and syrup, they're like sweet and salty sponges, soaking up pure goodness in every golden brown pore.

But I have new respect for the waffle after finally sampling my backyard maple syrup on Saturday. My friend and fellow syrup maker, Marlene, invited me for breakfast so we could finally enjoy our a syrupy feast, made possible by more than 100 hours of sap boiling and five jars of syrup between us.

And that's when I realized that perhaps I have judged the waffle too harshly.

"Waffles or pancakes?" Marlene asked in such a way that told me there was a right answer.

It was clear this was an important question, perhaps one which could result in me being judged (somewhat) should I pick the wrong answer.

I thought about those syrup-logged pancakes of breakfasts past. I really had my hopes pinned on pancakes.

But thinking about it, and seeing Marlene's eyebrow raised slightly in my direction, there really is no more perfect vessel for syrup sampling than the waffle, is there?

All this time, I thought its crispy, crusty outside was akin to eating a shoebox when really, it created the perfect holding pattern for syrup.

"Waffles," I decided without wavering.

It was clearly the right answer.

Out came the waffle iron, a kitchen gadget for which I've had no desire to own — until now. Batter was mixed and Marlene's husband Dean worked his magic with the hot iron.

As I poured the results of our first day of boiling over Dean's golden squares, I felt like I saw the waffle for the first time. Each tiny square on its surface held the syrup like reservoirs of sticky goodness — unlike those gluttonous pancakes, which would just sop it up greedily.

I could taste the sweetness and hint of maple synonymous with the first sap harvest.

The next waffle was covered in the results of the second boiling — a week's worth of sap — and showed off the stronger maple flavour of later harvests, helping me decide that medium syrup is indeed my favourite.

Was it the best syrup ever? It's in the running.

But they were certainly the best waffles ever.