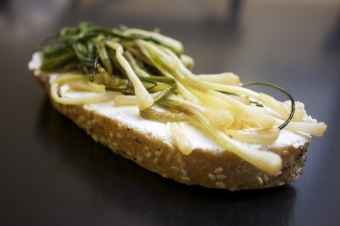 He was deft in the brokering of his deal with me. About a year into our marriage, my husband skillfully put forth a clever proposal that has remained in tact in the three years since. It came after he languished in the hot sun on the edge of a Niagara vineyard while I spent an hour wrestling wild garlic from the grips of some very hard, very dry earth.

With each bulb I lost to the rock solid grasp holding it in place, and each groan of disappointment from me after trying so hard to harvest a few tiny bulbs, I could see I was losing him.

He grew evermore engrossed in his BlackBerry. His pleas to go to the grocery store to buy garlic instead grew more frequent as my first foray into foraging waned and my frustration waxed.

Until then, we had done pretty much everything together with a smile. But on this day, we realized we had rather different interests. Still, I was oblivious to it as I climbed back into the car with a small handful of aromatic rhizomes yanked from the caked, concrete-like dirt.

There was no guilt from me as he complained about how we spent an hour only to wind up with garlic he was certain he could find cheaply and easily in the neighbourhood produce section. I was too happy with my minuscule harvest to let him get to me. Besides, I was sure what just happened back in that vineyard was considered quality time. I beamed with pride that I found food in the wild. How could he not have loved that? And then he asked a question.

"Listen, how be I golf and you forage?" he queried, no cracks of doubt in his voice.

"Done," I answered without hesitation. I had a new favourite hobby and I was happy to let him have his because the only thing I find more frustrating than trying to pluck wild garlic from unrelenting soil is trying to hit a tiny white ball with metal stick.

In the end, the only cause for debate was what I had actually harvested. Was it wild garlic or was it wild onion? It smelled unmistakably like that vampire foil but when cooked, it didn't have garlic's bite, only a sweet onion's nibble.

Its leaves were tubular, which reminded me of chives — garlic chives. So it must be garlic, no?

Others chimed in after reading my ode to this spiky allium, telling me it was wild onion. Field books were no clearer. So I turned to my garden. My spring onions had tubular leaves. My garlic, flat leaves.

Wild onions they were.

But, a few weeks ago, as I pried a pungent clump of what I thought was garlic from the clutches of a damp forest floor, forgetting what I had decided three years ago, the doubt started to creep in. All I knew for sure was that I wanted to eat those suckers. Still, it's always good to know what I'm putting in my mouth, lest I make myself a candidate for a Darwin award.

So I turned to my copy of Stalking the Wild Asparagus and though Euell Gibbons, a guy who foraged long before it was novel, could regale me with a story of stinking up a camp for days by using a particularly stinky wild allium to season chilli, he couldn't tell me the difference between wild onions and wild garlic. He could only tell me that neither were as good as wild leeks, those delicate beauties that make anyone who has dabbled in foraging froth at the mouth.

Other sources provided no clear insight into my pending supper's identity. My harvest was wild garlic, said one. No, wild onions, offered another. Wait for it — it was wild scallions, one suggested. The closest description I found to match what I wound up sautéing in butter for about 7 minutes and splashing with White Meadows maple vinegar in the final minute of cooking, was wild chives. Clear as mud, I thought.

So wild allium it is, Latin for all things oniony, garlicky and leeky. All wild alliums are edible, though they do have an evil twin called death-camas, a fitting moniker considering it contains a toxin more potent that strychnine. The big difference between that and my supper? The death-camas doesn't smell like onion or garlic.

Lord knows I sure did after devouring my harvest, served atop multi-seed sourdough slathered in fresh chèvre. Maybe that's why my husband would rather golf than forage with me.