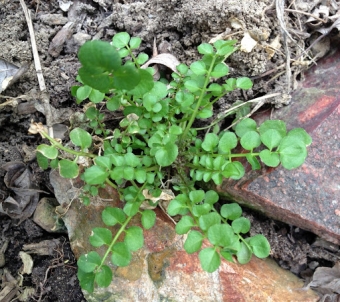 I love when my garden gives me gifts.

Altruistic, unexpected edible presents that require no effort from me to grow. How great and generous of a garden is that?
In my haste to just get on with spring already, despite the forecast not being game, I grabbed my garden spade, ready to turn some soil this weekend because in one corner of my microscopic plot, a prolific green weed was taking over.
Weeds are generally welcome in my yard. But I had visions of turning these guys under, letting them decompose and feed my soil nutrients that future tomatoes, chard and herbs would devour during the growing season.
With the tip of the spade pointing into the earth and my foot ready to press down and slice that shovel through weedy soil and roots, a voice within told me maybe I should think about this. Did I really know what I was doing? Didn't I want to take a moment to get to know the weed I was about to sacrifice just to make sure I really wanted to go through with this?

I pulled the spade away and got down low to inspect my now-spared victim. It had tiny delicate pairs of smooth green leaves that grew smaller the closer they got to the base of the springy spines from which they sprouted. Emerging from the top of the stem was a large, rounded leaf that looked like one of the pairs had merged to form it.

It was its pungent smell that really got to me, though. Here I thought my neighbour's teenaged son had gone on a bender the night before and got relief on the other side of the fence when really, it was this patch of dense plant life. Yes, the smell reminded me of vomit. I'm sure others have more flowery adjectives. If I had been feeling as generous as my garden, I might have called it peppery.
Instead, I'll reserve that one to describe the taste. The more I inspected, I couldn't help but wonder if this intriguing little green, growing in clusters, was edible. Despite my collection of foraging books, I wasn't sure where to start trying to find an answer.
Thank goodness for Twitter and Hank Shaw, whose book, Hunt, Gather, Cook, is among my collection. If you have any interest in wild food or hope to be able to survive the zombie apocalypse, you must bookmark this man's website. Even if you don't ever see yourself venturing into the woods in search of your next meal, it's a fascinating read with beautiful photos.
What makes him even better is how accessible he is. And within a few short moments of tweeting a photo and asking "Is this edible?" I had my answer and the makings of a meal before me.

It was winter cress, a weed with many monikers, including spring cress, yellow rocket, upland cress and creasy greens. My trusty copy of Euell Gibbons' Stalking the Wild Asparagus tells me it's a member of the mustard family.
Usually by this time of year, winter cress is past its prime, having gone to seed and becoming so unpleasantly bitter that only blanching can bring it back to the land of the palatable. But with spring taking its sweet time showing up for work, my winter cress was peppery, just as it should be.
Like I said, a gift — one that fills the uninspiring gap between the last of the root vegetables and the first asparagus in the garden or market quite nicely. And just 100 grams of this symmetrical beauty packs more vitamin A than raw broccoli and more vitamin C than an orange.
They were all qualities that would make it a standout in a salad. Boiling or sautéing also seemed promising.
But gifts should be celebrated and fewer things say 'Celebration' to me more than pie. So pie is what became of this perennial weed-that-is-really-a-present.
It was the least I could do to honour such generosity.
Please see Weed Wednesday: Make that Hairy Bittercress for an addendum to this post

Heat oil over medium heat in a skillet and add leeks. Cook until softened and translucent.

Beat eggs and add salt and pepper. Crumble in chèvre. I swear by Hewitt’s light and fluffy texture and love that it’s local but any chèvre will do.

Add the greens mixture and stir so everything is evenly distributed. Pour mixture into the pie shell.

Bake 25-30 minutes, until the egg is cooked through.

Check by pricking the centre with a fork and if it’s clean, dinner’s ready.