Welcome back: Niagara's seasonal farm workers return for the season 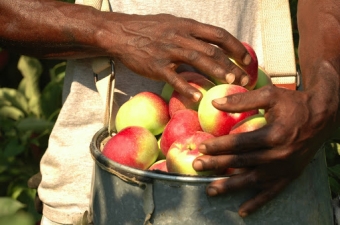 I moved to Simcoe as a cub reporter at what may have been the worst time of year. It was January and an ornery one at that. I remember so well the aserbic wind and cold, the banks of snow and their regular growth spurts that made me think it would be impossible for them to ever fully melt. Mostly, I remember how closed up everything was, dormant, even. Everyone seemed to be in hibernation. Snow snuffed the frozen tobacco fields like the thickest down duvet, stifling all signs of fertility and life that Norfolk's sandy soil was famous for generating year after year. And then there was the oppressive darkness, mostly my own. The weather, the long nights, the seeming lack of life everywhere made me wonder if this was what the weight of a million pounds felt like. It was oppressive. Time moved like sludge through a pipe and it was depressing. I truly wondered if I'd make it as a newly minted reporter and equally green Norfolk County resident. And then came spring. It brought light and warmth that roused everything and everyone, and it also brought Norfolk's temporary residents, who infused an energy into my newly adopted home that suddenly made me grateful to be there. They were seasonal farm workers from Mexico and the Caribbean, there to tend to the tobacco fields and orchards, doing the manual labour that Canadians had long ago determined wasn't worth their time or effort. The work was hard, no doubt tedious at times, but necessary to keep the local economy going and people fed, here and in the workers' homelands. I loved summer in Simcoe because of the farm workers. I loved seeing the parking lot outside the grocery store where I shopped filled with school buses that shuttled workers in from the county's rural corners so they could buy their necessities for the week and socialize. I got a kick out of trying out my high school Spanish on some and hearing the warm lilt of the island accents of others as I stood in line at the checkout. The Army and Navy hall hosted dance nights each Friday. Jerk chicken and goat curry were served and reggae spilled out of speakers. Sunday church services were held in Spanish and the entire hamlet of LaSalle celebrated Mexican Independence Day with a party at the general store. Norfolk came to life because of them. They were part of the area's story and success. They were welcomed and appreciated for the work they did and and what they brought to the community. When I moved to Niagara two years later, a place where seasonal farm workers also come by the thousands, they seemed to be living on the periphery like visitors whose presence was required but not celebrated as in Norfolk. Jane Andres has been trying to change that. She's a Niagara-on-the-Lake B&B operator who has befriended many workers and teaches guests to her home about the contribution they make to Niagara. "If it weren't for our friends in the orchards and vineyards there would be no farms," Jane says. She has travelled to workers' homes in Jamaica, held photo exhibits to expose how these workers live at home and how they are loved and respected. She has also ensured they have church services they can attend, choirs they can join and a community of which they feel a part, given many are here as long as eight months a year. A series of videos has been produced showing all that she has done to make workers feel at home.

Community, Hand Held Series from Worker Welcome Concerts Niagara With workers currently leaving their southern climes for a place where spring seems reluctant to make its presence known, Jane has been collecting hoodies and other warm clothes for them to make the Canadian weather just a little easier to bear. She's always encouraging people to say hello to workers, acknowledge them with a smile and wave — something to help them feel just a little more at home in a place where they spend most of their time. And on Sunday, May 5, she will help to put on a workers welcome concert at Orchard Park Church, heralding their arrival for another growing season and harvest. It features the Toronto Mass Choir and Fyah Brigade. Tickets are $20 and available at the church or by emailing Jane at jandres@niagara.com. It promises to be energetic, just like the people it's celebrating. Lively, much like how communities can become when they celebrate the workers' arrival. And somewhere that will feel like home for everyone.