A Sappy Tale: The first (small) bottle of backyard syrup 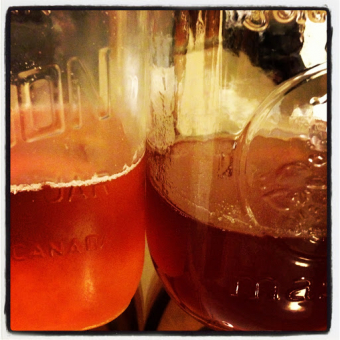 I'm in the midst of reworking the lyrics to the theme of Rawhide, that classic western series starring a 29-year-old, swoon-worthy Clint Eastwood, into a syrupy ditty. Problem is, I'm stuck on that first line.

That's because since my return Tuesday from the land of no maple syrup whatsoever, a.k.a. Cuba, all I've been doing is boiling the sap that my pal Linda Crago graciously dumped into storage containers for me in my absence.

There were about 58 litres of soon-to-be syrup waiting for me and, well, I've been bringing pots of sap to a rolling boil ever since. I have another 18 litres to go to catch up. And that's on top of the first 18 litres that friends and I cooked up nearly two weeks ago.

Now that my songwriter's block has clearly passed, I am excited to report that I have nearly a litre of beautiful amber, velvety syrup in my fridge.

Our first efforts at boiling two weeks ago taught me many things, not the least of which is that making backyard maple syrup isn't a process for the impatient.

It started with filtering our first 18 litres of the watery, slightly sweet and earthy tree blood through a coffee filter before even firing up the propane burner onto which we'd set our behemoth stainless steel, sap-filled pot.

It's a tedious and necessary step, separating the sap from the chaff that's the likes of bugs, bark and other sediment. Even if the sap looks clear, it's not. My poor, caffeine-dependent husband has seen his seemingly never-ending stock of filters drop to dangerously low levels this week because of my constant reaching for a new paper strainer to replace predecessors clogged with a fine white film.

Then there was the time on the burner. A whole nine hours of time over two days. What's that saying about watched pots and boiling? Well, watched sap — even if its boiling — never evaporates. Or so it felt.

But when it did, wow. As the steam drifted from my friend Marlene's front porch, you could see the sap  disappearing and changing from clear to cloudy, to golden to light brown. As it did, the smell of burning propane was overpowered by that distinctly Canadian smell, maple.

Our plan was working. The end seemed nigh. Then we had to cue to coffee filters again.

With about four or five cups of sap leftover from our 18 litres to start — don't forget, it takes about 40 litres of sap to make one litre of syrup — we had to strain again before boiling down even further to get that syrupy consistency.

If the first filtering seemed tedious, this was like watching molasses flow in January. The sap had thickened quite a bit, despite not being syrup yet, so it trickled, albeit much clearer, through the filter paper.

It's amazing — and maybe even a little gross — the sediment that gets left behind. These are impurities and sugar sand called nitre. Our backyard syrup book told us that if we didn't remove it, this gritty grime would precipitate in our finished syrup.

Another hour or so later on the stove and with just under two cups remaining, we dipped spoons into the scalding hot amber liquid and realized we were done. For now.

I'll tell you, maple syrup, which I could drink from the bottle, has never tasted so sweet. No, it's sugar content wasn't any higher than my usual local sugarbush pancake topping. But just knowing I had a hand in making it made it the finest maple syrup I've ever had.

Grade A for sure.