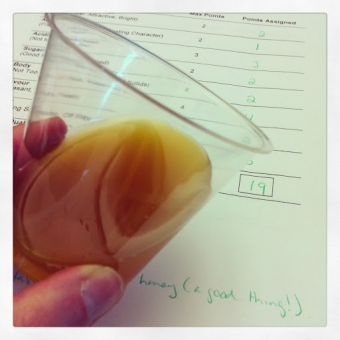 Serious palettes gathered at the Scotiabank Convention Centre in Niagara Falls last Wednesday to put their discerning taste buds to work and judge entries in the annual Ontario Sweet Cider Competition. Then there was me. Oh, I was there to judge, but when I say serious palettes, I learned just how unrefined mine really is. As I sat among provincial agriculture ministry reps with decades of experiences in apples, I heard them discuss entries as being too heavy on the golden apple or delicious variety side. We're talking people who could identify specific varieties, while I, in my simple ways, wrote comments like "A little too tart," or "Kind of earthy" or "A bit sweet for my liking." Yup, my taste buds, which have been exposed to golden and delicious apples, need to do a better job of paying attention and remembering flavours beyond sweet, tart and appley. Still, I love this gig, the third annual hosted by the Ontario Apple Growers. This was my second year being a judge in the competition and as I sipped, swirled and scrutinized nine samples of sweet cider from across the province — not bad for a year in which Ontario's apple crop was virtually obliterated by a ruthless spring frost — I marveled at the diversity of flavours I tasted. Mention terroir and wine immediately comes to mind. But that sense of place is noticeably present in so many other foods and beverages. Honey is one brilliant example but pour yourself some sweet cider and you'll be sipping a tall glass of terroir, too. While I couldn't pick out any mineral notes from apples grown on a limestone bed, I could taste the season that was. There was the sweetness brought on by July's heat, the tartness that came from a harvest yielding more Ida Reds than Galas. In some cases, the short crop meant more golden delicious than Cortlands and the absence of that necessary balance of acidity and sweetness in the cider into which they were pressed. Some versions boasted a bright caramel colour while others looked like murky, milky coffee, cloudy with cider's telltale sediment. There were smooth ciders and ones that felt rough and gritty on the throat. There were those that smelled like an orchard in a cup. Others were more flowery while some gave my schnoz a workout by giving off no scent at all. Some felt thick in the mouth, others thinner and juicier. And as I scored each one on a 20-point scale, based on criteria, including appearance, aroma, flavour balance, and overall impression, it was obvious that growers worked hard to work their magic with a season that was anything but.

In the end, two of my three top choices made the final cut of the nine judges around the tasting table. The winners were Blenheim's Delhaven Orchards (this cider got a 19 out of 20 from me, it was darn near perfect),  Al Ferri and Sons of Huttonville, who also placed in last year's contest, and Spirit Tree Cidery of Caledon rounded out the top three. Winning is a serious point of pride for participants, noted Leslie Huffman, a competition organizer and apple grower. These growers certainly have something of which to be proud. I must have a knack for knowing Niagara. I found out afterward that I had picked Torrie Warner's cider in my top three. The Beamsville farmer snagged second spot last year's competition. The man makes good cider. Grab a jug while you can. Who makes your favourite cider?