Soup: the most romantic meal of them all 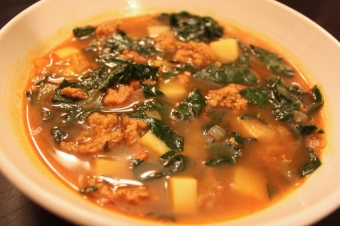 I've never been one to hide my disdain for Valentine's Day. It all started after leaving elementary school, back when Valentine's Day was fun. When it was full of cut-out cards and sugar cookies decked out with sickeningly sweet icing loaded with red food colouring and its magical, hyperactivity-inducing chemicals that have since been banned from classrooms everywhere. (Killjoys). Come high school, Feb. 14 was pretty blah, mostly because I wasn't one of those girls whose boyfriend broke into her locker to pack it with a surprise teddy bear, balloons or flowers. And though I was quite content not to be one of those girls the other 364 days of the year, I did envy them on Valentine's Day. Now, married to a potential celebrator of Valentine's Day, I still eschew those 24 hours dedicated to love. I think pink and red clash, quite frankly, and I can't stomach the thought of being herded in and out of a restaurant, having limited time to eat my meal before the next shift of diners arrives. I also hate the thought of someone getting fleeced on flowers that are a fraction of the price come Feb. 15. I know my husband, good soul that he his, would oblige more than willingly if I expected (demanded) to be wined and dined and presented with wilting long-stem roses. But alas, despite the opportunity presented, I still deny all things cupid. Bah humbug, you must think. Trust me, I'm not entirely unsentimental. I'd so much rather enjoy a meal made at home, made together, then face off over a Scrabble board, go for a walk under the stars, our mittened hands intertwined. But it all starts with that meal. And the most romantic meal of all in my world isn't Chateaubriand or oysters. It's not saucy spaghetti with its slurpy and suggestive noodles, either. It's soup. Yes, soup. If I may offer you some advice, download Hawksley Workman's 'Let's make some soup' and you'll understand why. It is perhaps the most beautiful love song about creating something with someone important. I even debated having it as "our song" at our wedding before we decided to scrap the dance and catch a flight to Germany instead. Here's the first verse to show what I mean

So in honour of true romance, unabashed love and heartfelt sentiment, I urge you to grab your heavy-bottomed pots and ladles. Happy Valentine's Day. Now let's make some soup.

This soup is easy to make and a favourite of both mine and my husband’s. We eat it nearly every week, that’s how much we love it. I have several pounds of local potatoes I’ve been storing this winter and local kale is available at Bamboo Natural Market in St. Catharines to help keep it local, too.

Cook onion in oil over medium heat until soft and nearly translucent.

Add potatoes and broth, bring to a boil, then reduce heat and simmer 15-20 minutes, until potatoes are soft.

Serve alone or with a slice of crusty bread and your favourite porter or dark lager.