"Closin' Joe" opens up about the history of local canning industry 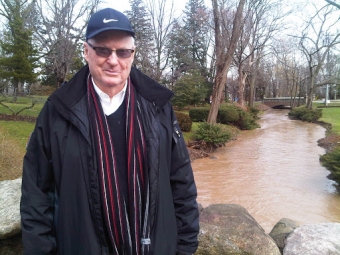 Joe Rider and his wife Marian are canned peach connoisseurs.

They'll gladly tuck into a tin of the preserved fruit if it's from South Africa. But canned clingstones from China?

"We don't even eat peaches anymore from China because they're soft," Joe said recently over coffee and a donut at a Vineland rest stop. "They call them choice quality but really, they would be standard quality."

Standard — and, therefore, lesser — compared to a Canadian canned peach, that now extinct preserve that Joe knew so well from his 40 years working in canneries in Niagara, Exeter, Simcoe and Penticton.

Be it peaches or other fruit and veggies, Joe knows what goes in to putting up the season's bounty. He's also familiar with the story of an industry that ceased to exist on a large scale in Canada in 2008 when CanGro in St. Davids was shuttered. It was the last fruit cannery in the country and one that Joe oversaw in his career with Canadian Canners.

The 85-year-old, who know calls Brantford home, talks about how it once was when he managed workers and factories where produce grown by local farmers was processed in his autobiography The Way It Was: My Life Story Including a 40 Year Cannery Career.

When Joe started his career as assistant soup room foreman at Canadian Canners in Simcoe in 1951, there were 50 canneries in Canada, some of which he had to close. There were only five left when he retired in 1991.

The closures were a repetitive task that earned him the monikers Closin' Joe and Hatchet Man, neither of which he said he's overly fond.

"I was only the messenger," Joe said. "I liked the people (I worked with). They worked hard to make it a good operation and then it was gone. It bothered me they closed all the places I worked. They locked the door."

And today, save for a few small-batch, craft canners that have popped up in CanGro's wake, such as The Bumpercrop, there are no canneries left. That's why Joe gets his canned peach fix from South African imports, snubbing the Chinese editions, which is where CanGro, owner of the Del Monte and Aylmer labels, moved its operations.

Still, even though the 50 canneries that existed when Joe started his career may seem astronomical, the industry was already shrinking due to consolidation back then. Canadian Canners once had more than 150 plants to its name. At least eight of those were in Niagara, Joe said.

Consumer tastes changed and canned goods gave way to a hunger for more fresh food, which is one of the reason's for the industry's demise.

Despite the sadness he says he felt telling people they were out of work — sometimes seeing the same people lose their jobs more than once — Joe is pragmatic about the end of an industry that sustained him.

"It's easier to call up a boatload of canned goods (from China) than finance 30 to 40,000 tons of fruit here. It's just economics," he said. "I've closed Penticton, I've closed Vancouver, I've closed Exeter. It's change. You've got to accept it. You can't change it."

Joe's self-published look back is also one of the only historical accounts of the Canadian canning industry.  He started writing his memoir after settling in Brantford in 2008 and, after getting feedback from friends and former colleagues, was encouraged to polish his words and add a few thousand more. He re-wrote the book five times by hand until he had a draft he was happy with — one that would let people know just how relevant Canadian Canners once was.

"People did not realize how big this company was," Joe said. "This was a national company with 150 canneries down to 50 down to none. It's really globalization at work and we got the worst of it.

Since releasing the book last summer at a launch at Ravine Vineyard, Joe has made the rounds on a speaking tour, visiting the towns where he once worked and sharing his story with former employees, farmers and most recently at the Vineland Research and Innovation Centre, a place that, at one time, devoted a lot of research to creating the perfect canning fruit varieties.

"It was all part of Canadian agriculture," Joe said.

Now, it's relegated to a history book telling the story of one man's life in the midst of it all.

"We provided not only a lot of employment, people paid their taxes," Joe said. "We provided a great boost to Canada and now it's gone."

The Way It Was is available at F/X Chocolate and Ravine Vineyard in St. Davids,  Forget Me Not gifts in St. Catharines, Cherry Lane Orchards in Vineland and Puddicombe Farm Market in Winona.