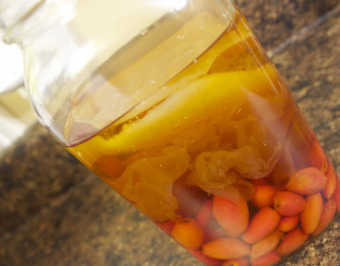 I tried making vinegar using rose hips. It worked. And it's way easier than making something that requires the tedious cleaning of rose hip innards.

My mom is about to fall off her chair if she's reading this. I believe you should always listen to your mother. My mom is now about to be disappointed because I don't mean her. I mean a vinegar mother. Five weeks ago, I threw some foraged rose hips into a mason jar with a bottle of wine and a gelatinous glob, and called it vinegar in the making. The gooey substance (aka the glob) was really quite beautiful. It was the mother from an unpasteurized cider vinegar, that stayed suspended in the wine, like a jelly fish frozen in time. Despite its sedentary ways, it was meant to move my concoction along nicely from wine and rose hips to the fermentation finish line where it would become vinegar. Three weeks passed. That's the minimum time my research led me to believe I'd have to wait for the mixture to go from boozy to biting. I started to think my mother would need months to work her magic. The fruity liquid still tasted like wine, albeit really, really bad wine. So I ignored her. Stopped peeking every few days into the dark, warm cupboard where I had set my mother to work with the wine and rose hips. And then I cracked the cupboard door while going stir crazy while sick last week. Shocked by what I saw, I pulled it back all the way and stared at my experiment with a furrowed brow.

The making of a vinegar mother

Was that something floating on top of my vinegar? Why yes, it was. And it was white, translucent. Slimy. I was certain it was mold. My experiment was ruined. My furrowed brow turned to a pout and the vinegar vitae, I thought, would have no happy ending. There would be no fancy, schmancy salad dressing, no bragging rights and worse yet, no homemade gifts — prize possessions at this time of year — to give. I pulled the mason jar down from its perch and scrutinized more closely. I sniffed. I shook the jar and that's when I realized the skin that developed was rubbery rather than spore-filled. It didn't break when gently poked. In fact, it kind of stretched. So with scrubbed hands, I reached in and pulled out the mystery matter. It jiggled like jelly and changed shape at my gentle tugging. It turns out my mother had a friend — a new mom. It was like a mothers' support group in my jar of vinegar and I was delighted. Maybe my mother was calling in some help to make this rose hip vinegar happen. Whatever the case, I took it as a good sign. I gently slid the slimy matriarch back in my jar and watched in horror as she sunk to the bottom. I feared I had just committed matricide and hid my secret by putting her back in the dark cupboard. Forget the cat, I thought. Curiosity does more harm to vinegar mothers. I checked on her two days later to see if she recovered. To my surprise, I found a new mother floating on the surface of what was now a very astringent smelling liquid. It had the telltale caustic scent of vinegar.

But what was with all the mothers? I'd done lots of reading about making your own mother but it sounded complicated and time consuming. This was way too easy and unexpected to have them multiply like bunnies.

I turned to the great Google gods in search of an answer. I learned after much reading and worry that when when a mother appears on top of your vinegar, it's done fermenting. It's fully vinegarized, provided it also smells and tastes like vinegar. Thanks mom! My vinegar is pretty strong and I may need to dilute it when I use it. But it's a beautiful, honey-coloured concoction that is not nearly as sweet as its appearance. I also have mothers to use and re-use, turning leftover vino into vinegar, if I choose. And I do. My mothers are already working on some old Riesling and I'm anxiously awaiting the newest arrival in my mama menagerie. What have I learned from it all? Aside from how to make homemade vinegar, I'm certain that mother really does know best.