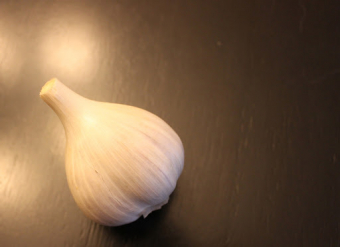 A head of German white garlic.

All chances at a social life have been kyboshed for me for the next while.

It doesn't help that I'm a vector of illness thanks to a bug roosting quite comfortably in my sinuses and chest. But the real reason I'm doubtful that even my co-workers will want to sit with me at lunch this week is because of where I've turned for comfort and, I hope, a cure for what ails me.

I get lazy when I'm sick and my work in the kitchen usually amounts to little more than cracking an egg into some vegetable broth and sipping. Sounds effortless but when all you want to do is curl up in the fetal position and pull the covers over your head, egg drop soup may as well be Christmas dinner. It still feels like work.

I was just about to resort to my usual get-well-soon concoction when I got inspired by a bowl sitting on my counter, full of garlic from my garden, CSA baskets and impulse buys from the Niagara Local Food Co-op. With quirky names like music, Susan Delafield, Leningrad and German white, the papery heads are also natural muses in the kitchen. Mostly, it was garlic's healing, anti-microbial properties that really piqued my interest in that moment.

A lot of local farms grow and sell garlic, so we don't have to give China the monopoly on the stuff anymore. It's also virtually brownthumb-proof in the garden. I've grown it successfully the past three years and if I can do it, anyone can.

I grow Music, planting the seeds for my allium compositions in the fall, harvesting in late July. Music  is pungent and oily, perfect for smashing and mincing, and making fingers sticky.

But as I stared at an empty soup pot Friday, sniffling and with stomach grumbling, there was something about those Leningrad cloves that had me picturing the viral squatter in my body quaking in its spiky cell walls with fear.

So with a few large cloves of fearsome Leningrad as my taskmasters, I set about making a soup for which there are apparently as many variations as there are flu bugs: Spanish garlic soup or sopa de ajo for those wanting to try their tongue at a little Español.

What makes this soup perfect as a flu and social life buster is that it's ridiculously easy to make and actually has flavour, which most other foods don't when you're congested and hacking and sniffly and gross.

Most people probably eat sopa de ajo because it tastes good. But if warding off the latest bug is your motive, smashing the cloves and letting them sit for 15 minutes before cooking allows time for health-promoting enzymes to react, boosting garlic's much-touted healing properties.

Borrowing from the different spins on the recipe, I ate five bowls of sopa de ajo in the three days. There are more in the cards. The downside: I will be sweating that Leningrad out of my system for the next several days, making those around me the unwitting victims of an olfactory assault.

I know this because I've been one.

When I was 18, my mom got a clay garlic roaster for Christmas. She'd roast three heads at a time sometimes, squeezing the resulting warm, creamy brown pulp onto crusty bread and devouring.

One night after such a bender, she picked me up from my part-time job pumping gas. We got stopped at a RIDE check and just as quickly as the cop bent down to take a sniff of my mom, he shot back up and waved us on, even before she finished telling the officer she hadn't been drinking.

Five days later, standing 10 feet from my mom in her office at work, I was walloped by the unmistakeable smell of garlic. I told her she needed to cut back and give the roaster a rest. She insisted she had. It had been almost a week since she ate garlic of any kind.

My mom stunk but she was healthy. And that's pretty much the result I'm going for now.

Heat one tablespoon oil in soup pot over medium heat. Smash or finely slice five cloves of garlic and saute in oil until softened and lightly browned. If using smashed garlic, break apart with a wooden spoon as it cooks.

Add paprika, stirring a few seconds to mix with garlic. Add broth and bring to a boil.

Meanwhile, slice the bread into inch-thick slices. Cut remaining garlic clove in half and rub onto bread. Heat remaining oil in a pan, adding bread and browning on both sides. When browned, place each piece into the bottom of a soup bowl.

Next, beat the eggs and add to the soup slowly, pouring a little bit at a time through the tines of a fork into the hot liquid, creating a ribbon effect with the eggs. Gently whisk a fork through the soup to break up any large pieces of egg.

Ladle hot soup into bowls on top of bread and enjoy.