Making the acquaintance of the quince 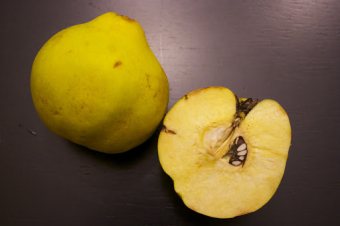 No quince will ever win a beauty contest.

But I bet if this most unusual of fruits could, it would shrug its shoulders. The quince doesn't care because it's the honey badger of fruit.

Though it looks like it's having an identity crisis — is it a pear or an apple or both? And how is it part of the rose family? — what the quince lacks in visual appeal, it makes up for elsewhere.

The quince is all about substance, not flash, with its perfume of overripe tropical fruit — a gorgeous smell that demands you inhale deeply in its presence. That alone convinces me the quince should join the pawpaw and Kieffer pear on my list of fruit trees I will one day plant in my dream backyard.

Mind you, I'd never want to sink my teeth into one without cooking it and adding sugar first but I appreciate how the tart quince's real magic is worked when its cream-coloured flesh enigmatically transforms into a sweet, pink jelly that pairs as perfectly with toast and butter as it does with a strong cheese.

While I was certain I was the last person to have ever heard of quince when a local farmer told me three years ago about how she planted lavender between her rows of her quince trees to test the herb's potential as a natural pesticide, I learned this week that I wasn't.

I also learned that the quince needs a new marketing strategy.

Heck, it just needs a marketing strategy. Fewer people know about this unusual fruit than I thought.

With visions of quince tarte tatin in mind, I bought about three pounds of the golden, knobby fruit from Beamsville farmer Torrie Warner a couple weeks ago. Quince is in season in late fall so was in its prime. But after trying to neatly slice through its flint-like flesh, I realized that while I might have tarte tatin when I'm done, I'll also likely have several butchered fingers.

So, quince jelly it was. Time consuming but relatively safe in comparison.

I found many recipes online but I settled on one that appealed to me because of the simple story that came with it: an elderly man had a prolific quince tree and he invited his neighbour over for a jelly-making session.

I took comfort in an accompanying photo of the old guy hovered over his pot of bubbling quince juice, wooden spoon in hand, and instantly trusted that I wouldn't be disappointed if I took my jelly-making cues from him.

I chopped and stewed, mashed and strained. Then I strained again for good measure before adding nearly six cups of sugar to my seven cups of juice and stirred until it thickened.

In the end, I got six jars of rose-coloured, soft, juicy jelly that catches the light in my kitchen, glinting and gleaming like a crown jewel.

I couldn't wait to take a jar to work to share with a co-worker who had given me some of his mom's homemade grape jelly this summer. I imagined a response along the lines of "Wow, my parents love quince jelly. Thanks, Tiff."

Two days later, I came to work armed with another jar of jelly. Under the threat of having my work iPhone taken away from me because someone thought I should have an old BlackBerry instead, I planned to use some canned persuasion as I made the case to my boss why I should keep my phone.

When I presented him with the jar of jelly, certain it would seal any deal, my learned mentor furrowed his brow and said, "Sorry, what is it? What's a quince? Is that a berry or something?"

And yet, I still got to keep my phone.

That afternoon, while relaying my victory to my other boss and co-workers, I told them how I was ready to fight for my phone with a jar of quince jelly.

Boss No. 2, never one to mince his words, furrowed his brow and said, "What the @$#! is a quince? That sounds like a disease, not a fruit."

See what I mean? The quince needs a champion in these parts. A catchy slogan and airbrushed spots in glossy magazines and on billboards. It needs a paint colour or one of Gwyneth Paltrow's children named after it.

It does fine in Spain and Portugal, where the jelly is a household staple and where people know the quince's beauty is not skin deep. But here, well, it causes confusion and cussing.

And here's why: heritage fruit trees, including the quince, are disappearing from our landscape, only to be replaced by tidy trees that don't offer fruit or feed us. The result is furrowed brows when offering up jars of quince jelly.

Fingers crossed that, by the time I get that dream yard, I'll be able to find a quince tree to plant because unlike that honey badger, I do care.