BS Pie: How I'm coping with a surplus of butternut squash 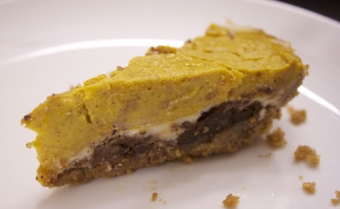 Butternut squash cheesecake. (Next on my to-do list: working on my pie slicing skills).

It has stood the test of time because there's more than a kernel of truth to such a saying.

Take 'Be careful what you wish for.'

Turn the clock back nine months and I turned to Twitter to help me deal with the mounting problem of a never-ending pile of spaghetti squash I had accumulated from CSA deliveries. As I looked at the massive heap, it seemed like the least versatile squash ever and whatever was I going to do to squish my squash problem?

I got some great suggestions — spaghetti squash ramen, anyone? — but I also found myself thinking, 'If only they were butternut squash.'

Well, as luck would have it, I now have a pile of butternut squash in my garage from my CSA and from yet unused, pre-CSA delivery purchases.

Oh, I've made soup with ginger and apple cider. I've stuffed one with apples and vegan sausage. All of it was very, very tasty and yet the pile grows.

Feeling a little green around the gills at the thought of more orange soup or jaundiced stuffing (I've had butternut squash soup three times in the past week), I worried about getting into a squash rut and having squash rot in my garage.

But I've found something that will help me show that BS — that's short for butternut squash — who's boss. I made butternut squash cheesecake. And it was good. Vaguely pumpkin-like but better, if only because it used something I have in abundance right now.

I got inspired after finding a recipe for vegan pumpkin cheesecake that I modified. I made my own gluten-free crust and used local chèvre from Hewitt's Dairy instead of a soy cream cheese. I also recall hearing that butternut squash is a good stand-in for the orange orbs. Sounds perfect to me and the end result was pretty darn close, really. It wasn't overly sweet thanks in part to the mild tang of the chèvre. It also wasn't overwhelmingly spicy, which pumpkin desserts can sometimes be.

This doesn't mean I've started wishing for pumpkins instead of butternut squash now. Trust me, I've learned my lesson.

Not squash-related, but a very big thank you to Ruralist, a website highlighting all the awesomeness that exists outside of urban Ontario. The kind folks at Ruralist put Eating Niagara on its shortlist of local food blogs. I am honoured. Be sure to check out the site. It's quite simply very cool.

In a food processor, pulse 1 cup of walnuts with sorghum flour until finely ground. Add 3 tablespoons sugar, butter, milk and salt and pulse again until mixture starts to clump and is moist. Press evenly into pie plate and poke with a fork about 15 times.

Next, combine chocolate chips and remaining walnuts in a food processor, pulsing until finely chopped.
Spread evenly over the bottom of the pie crust. Note that the nuts and chocolate will be crumbly.

Combine half the tofu, half the chèvre and half of the 2/3 cup of sugar in a food processor and process until smooth. Pour over the chocolate and walnut mixture in the pie crust, spreading evenly.

Combine remaining tofu, chèvre and sugar with the squash, cinnamon and pumpkin spice in a food processor and process until smooth. Pour over the tofu layer in the pie crust, spreading evenly.

Bake for 35 to 40 minutes or until filling sets. Let cool before eating.