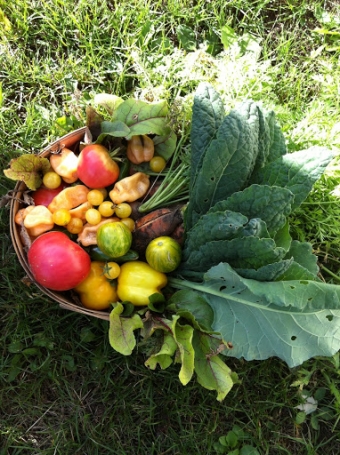 And I think I've shivered out the last bit of early November chill that went through my jacket, shirt and flesh to my very core where it has stayed for the last few hours.

That's what happens when you drag your heels putting your garden to bed, hoping that maybe this onward march toward winter and the ever-cooling fall temperatures are just a fluke. But I realize I'm just in denial about the six months of cold weather, grey days, layers of clothing and heavy footwear, and lack of gardening that are ahead.

Today, my friend Rowan and I finally uprooted the spent tomatoes and tired peppers that we left lingering in Grackle Garden with the hope they might beckon summer back.

I haven't written much about Grackle Garden, so an introduction comes late, when the patch of earth in a yard that we borrowed this summer is well past its seasonal prime and interesting stories.

Last year, while harvesting pears, a homeowner ushered me conspiratorially to her backyard where blue tarps laid undisturbed for years, protecting a swath of soil carved into her lawn. Her ageing parents, who were now in a nursing home, had used the garden every year during the decades they raised their family in their north St. Catharines, red-brick, one-and-a-half storey home.

But when the garden became too much, rather than replace fertile ground with sod, they covered it with tarps and waited for the day it might be used again.

"Do you know anyone who might want to use this?" asked the woman, who Rowan and I have affectionately dubbed Madame C.

I knew plenty of people who would froth at the mouth at such a space, but none so much as me.

I struggled to coax vegetables out of the earth in my own postage stamp, shade-filled yard. What was before me now was a clean, sun-filled slate to start anew and really see whether I had a green thumb, to test whatever gardening mettle I thought I might have had and to find out once and for all if I was meant to grow more than hostas, chard and garlic.

So I signed up for a year of yard sharing but brought a friend along, just in case I needed help, had too much kale to eat myself and well, who's kidding whom? It was someone else to blame if nothing grew!

Seriously, though, I was really excited to have an allotment, named after the nest of cackling grackles that had displaced some other poor birds living in the gnarly wisteria near the entrance to what would be my refuge this summer.

Yard sharing is just like it sounds. Someone has a yard with room for a garden that they can't use so they offer it up to someone else to grow food and maintain. There's a huge network of yard sharers throughout the U.S., started by a woman named Liz McLellan, to provide room to grow for people who live in apartments, are on wait lists for community garden plots, are frugal or just plain love the feeling of dirt under their nails.

The Stop Community Food Centre in Toronto also has its YIMBY program, connecting those without yards in the city to those with garden space to spare.

With the emphasis on growing up instead of out in north Niagara, keeping any sprawl from encroaching on greenbelted farmland, I only see this as an idea becoming more common here — with those in dense neighbourhoods seeking to share space with their suburban neighbours.

And why not? Ever since the tarps were pulled off Grackle Garden in April, revealing newly sprouted garlic, long forgotten but still putting in the effort to grow and waiting for the day it would see the sun again, there really isn't a patch of grass I've seen since that I haven't envisioned as garden space.

It's an idea fuelled further by the inspiration I found in the pages of a gorgeous book called Carrot City: Creating Places for Urban Agriculture, filled with photos of cities and towns, individuals and organizations, growing food where no one dared to ever grow before. Until now.

If you need a muse and want to see just how beautiful and integrated urban farms can be in the cityscape, this book, a project of Ryerson University's Department of Architectural Science, is filled with photos and words — albeit sometimes a bit academic — to get the hearts of greenthumbs racing.

In the end, Rowan and I didn't do anything as elaborate as what was in those pages. Instead, we relied on our own instincts and a yellowing book, simply entitled Companion Plants to guide us.

A beet ready to harvest.

We had herbs, the last of which were shorn from their roots this morning: lemon catnip, my new favourite lemon verbena, thyme, oregano, basil, and cilantro and parsley, though those two were busts this year.

I figured out how to save seed from the border of marigolds we planted around our tomatoes to keep pests at bay. Such a simple flower, one I've never really taken the time to get to know until this year. It's now a favourite, its simple blooms cheerfully greeting me and instantly bettering my mood whenever I'd visit.

We had surprises, too. Gifts, I'd call them, though Rowan might beg to differ.

We didn't plant bok choy but that didn't keep it from appearing late in the summer.

There was purslane galore that showed up in every bit of dirt that wasn't already home to something else.

I harvested it and shared what I could, only for it to come back thicker and heartier, like leg hair a few days after shins have been shaved smooth.

I tweeted about it and delivered four three-litre baskets and grocery bags full of the stuff to strangers willing to give it a try or to folks who, like me, loved to eat this super food super weed.

Grackle Garden made the world a smaller place in those brief moments of conversation as I stood on front porches in all corners of St. Catharines and handed over the harvest to people I would have otherwise never met.

It also helped me befriend new coworkers, for whom I'd bring in excess peppers or greens. The vegetarian I share an office with was more grateful than I would have thought anyone might be for such simple things.

And what I didn't share, I put up so that I wouldn't waste anything. Between it, my CSA from Linda and whatever temptations came by way of farmers markets, I had a lot of fresh produce in my possession this summer. Dill cucumber relish, beet and horseradish relish, hot sauce and red pepper jelly were new ventures for me in my efforts to use everything.

Then there was the gazpacho — oh my goodness, the gazpacho I ate to keep on top of the tomatoes — and kale smoothies I drank every morning to use up my proliferating greens. I don't think I'd be able to stomach either again for a long time.

Until next year in Grackle Garden