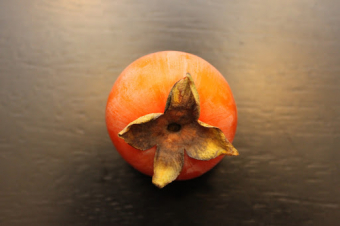 "The divorce proceedings were not fruitful, rather, almost persimmon like!"

It's rare that I've met a fruit or vegetable I don't like.

Save for celery, that loathsome, foul creature, there really isn't anything that makes my nose wrinkle in disgust.

Until now. And I hate to say it since it's one of the few fresh local fall fruits available beyond apples, pears and, if you can get them, those delicious pawpaws I wrote about earlier.

I'm talking about the persimmon. The quote above perfectly captures this Chinese fruit that grows well here.

I really wanted to like the persimmon when I tried it for the first time last year at Charles Rhora's nut nursery. The Wainfleet farmer plucked one of the tiny orange orbs, practically glowing against a grey October sky, from a tree in his nursery and handed me what, at that moment, was the most beautiful fruit.

I'd never tried one, anticipated what it might taste like and admired its small, curling, pointed leaves before sinking my teeth into it. I got a mouthful of pudding-like flesh that tasted mildly of apricot.

So far so good right? But the pleasant flavour was soon overtaken by a sharp bitterness on the back of my tongue, followed by the weird sensation that my teeth had grown fur. My mouth had a chalky dryness to it.

"Not bad," I told Charles politely, focusing on the toned-down apricot I'd experienced a moment earlier.

This is when I made a mental note that if I remembered anything about the persimmon, it was that I should stick with apples at this time of year.

Ah, but memory is funny thing when you get older. It doesn't seem to last as long. And so, tempted by this local fruit option, I recently bought myself a pint of persimmon from the Niagara Local Food Co-op. I vaguely remembered not being fussy about them but couldn't remember why. In my mind, that made them worth another try.

It didn't take long after devouring one to recall why I wouldn't be heartbroken to have never crossed paths with another persimmon again. Oh how it packed a bitter punch in my throat, like someone had  put me in a choke hold. And yes, my teeth felt like they hadn't been brushed for days.

Apparently persimmons are high in tannins, common in red wine and tea, which is why my mouth felt pasty and dry, like I had been sucking on a towel.

I really wanted to love the persimmon. Someone told me not to give up. The fruit has to be really ripe.

But mine was bright orange, soft with translucent skin — ripe, according to all the hyperlinks I obsessively clicked on to make sure I wasn't doing this eating of the persimmon wrong.

It's a lost cause for me. But how about you? Any persimmon fans out there?

There's no reason not to be given how high they are in fibre, potassium, beta carotene, iron, Vitamin C and magnesium. They're even rumoured to boost the body's ability to metabolize fat. Sounds like a good addition to any diet, no?

Well, maybe for you. But I think I just found celery incarnate.