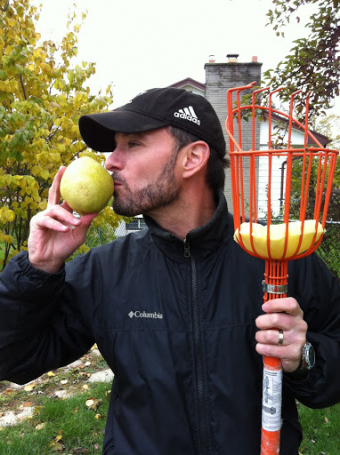 I can explain my fascination easily — more easily than I can do simple multiplication. I write for a living because I bombed math in high school and ever since, I've been fascinated by those figures, digits, sums, dividends, multiples — whatever you want to call them — that have proven so difficult for me to fully understand.

Also, as a journalist, well, it's just how we're wired. Someone says something, we say give us the numbers to prove it, even if we don't fully understand them. But somehow, numbers make it true.

So it was with that zeal that I updated the Garden of Eating — Niagara's website after every harvest this year and in what could be called rare moments in my life, understood quite easily what the numbers were saying.

They were adding up to a record year for harvests and, in the end, there was no two ways about it. We reached that record and kept going.

As we dumped the last Kieffer pears into a waiting bushel basket this weekend with me having taken one on the chin — and getting a nifty battle wound as a result — we pushed past a milestone I've been wanting to achieve since starting this little fruit harvesting adventure.

We hit 2,000 pounds of fruit — rescued fruit that would have otherwise been wasted, turned into compost, left to rot. Actually, we hit 2,057 pounds to be exact and called it a season — our best season yet.

Not only did we harvest more pounds of fruit, we harvested more kinds of my favourite half of my favourite food group to boot. From the mulberries in June to our cornerstone Kieffer pears, many of which have been sauced or packed in simple syrup for food banks thanks to Mike Gretzinger and his students with the Niagara Catholic District School Board, we earned purple hands and scuffed faces to show for it.

We also shared our harvests with new social organizations, including SOADI and a community house in Welland, which used the fruit for breakfast programs. All the while, we didn't forget our regular recipients, including the Ozanam Centre, YWCA and Project Share, among others.

It was also a big year because we registered as a non-profit organization, formed a board made up of stellar folks and began making plans for getting more unwanted fruit in the hands of people who need it. Of course that will need money but we're working on plans to get some of that, too.

To celebrate the season that was, I have three snazzy Garden of Eating tees to give away to a trio of lucky ducks who can tell me the three varieties of pears we harvested this year. (Some of the hyperlinks in this post will lead you to the answer).

Enter by commenting on this post or on the Garden of Eating's Facebook page. All names will be entered into a draw. So if you're looking for that must-have item for your wardrobe, enter by Oct. 31.

Thanks again to our donors, volunteers and supporters for a banner year. It wouldn't have happened without you.