Getting my paws on a pawpaw 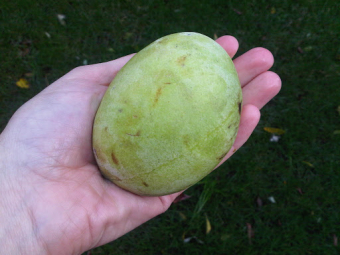 It's a pawpaw. Not only is it indigenous to this area, it's delicious.

How I love le pawpaw.

Not sure what it is about the tropical (yet native!) fruit that brings out my inner Sebastian the Crab from the Little Mermaid. But I do know one thing: I only sing the truth.

I was over the moon when I saw pawpaws were available to order from Grimo's nut nursery through Niagara Local Food Co-op last week. So I signed myself up for four pounds of this magical, wonderful, delightful fruit.

If the mango and banana had a love child, the pawpaw would be it. In fact, one of its nicknames is the poor man's banana, though I feel like a queen when I eat one. I'm certain they're a delicacy and would take a pawpaw over a banana any day.

If it's not its smooth, pale green skin and oblong shape that get you curious, its innards sure will. Think pale yellow, with large, bean-shaped black-brown seeds lined up perfectly down the centre of its creamy, custard-like flesh.

And then think weird looks from your co-workers when you bring one with you to the office for your lunchtime dessert. "Man, I feel so boring with just my apple," they'll say. And they should. (OK, I'm being a fruit snob now).

Still, it's true most other fruits dull in comparison, at least in my humble opinion. The pawpaw smells like an all-inclusive vacation: pineapple, milk, guava, sun, warmth. I breathe each scent in and marvel at every sniff that something so seemingly exotic is about as local a fruit as you can get here. I carve out a piece of its buttery flesh with my spoon and feel only gratitude that it is.

After trying my first pawpaw last year at Charles Rhora's nut nursery in Wainfleet, I knew I had been given something special. It was unlike any fruit I'd ever had and one that I would come to crave, though finding them wouldn't be easy.

I've never seen them at a local farmers market or roadside stand. That's because until recently, they hadn't been commercially grown.  They're thin-skinned and bruise easily, though blemished skin doesn't mean what's underneath is bad. But they don't always look very good, which might put those in search of the perfect-looking fruit off.

Even in my foraging expeditions, I've never stumbled upon a pawpaw tree, with its large leaves and heavy edible orbs. Ever since Charles Rhora enlightened me to what the fruit with the funny name is really like, I've looked forward to "growing up" and having a yard in which I could plant a pawpaw tree of my own, buying one. Both Rhora and Grimo sell them to those lucky ducks with yards yearning for fruit trees.

And why not? It's meant to be here in Niagara. The pawpaw is indigenous to the eastern U.S. and Canada's Carolinian forest, which stretches into Niagara, but also includes Norfolk County and the rest of Lake Erie's north shore.

The pawpaw has even caused Albany, Ohio, to land on my travel to-do list because each year in September, the town hosts a pawpaw festival.

It's also packed with loads of anti-oxidants and potassium. It sustained Lewis and Clark during their expedition. If you look at a breakdown of its nutrients, it's kind of hard to believe no one is finding a way to market the pawpaw on a massive scale as the new superfood.

Give it time, though. Once enough people sink their spoons into one of these lovelies, I won't be alone in serenading the pawpaw in my best Sebastian the Crab voice.