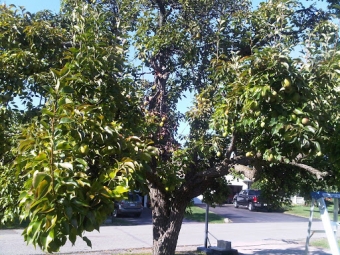 It is my safe haven. A place of calm, escape and acceptance.

The Kieffer pear tree at the end of my street offers unconditional friendship, year after year, sharing its bounty with me, welcoming me into its midst with open branches. When I climb up a ladder to get lost in them and the fruit they're bearing, I feel like a child pressing herself into a warm, loving hug from her favourite aunt.

I must sound nutty anthropomorphising a tree but when it comes time to pick the pears on this tree with a shape like a chubby grandmother and about the same age, too, I feel like I'm reunited with an old, loyal friend.

I talk to it. Say hello and tell it that it's crop is looking a little thinner again this year. The frost-ridden spring must have been tough on its old, arthritic limbs that look so stiff and yet seem to bend so easily, when I'm among them, allowing me reach some of the best fruit safely.

In need of peace and solitude, I picked my favourite tree in the city nearly clean this week. I didn't put the call out for helpers like I usually do. I just needed it to be me and the tree. To clear my head after a day of constant chaos at the office. To do the most simple rather than cerebral of tasks. To just get lost in its leafy crown and have the hectic demands of the hours before our get-together drowned out by the soft beat of pears landing in a wooden basket. Or the deeper thud of some of the biggest but unreachable fruit dropping to ground, pushed by a passing breeze, keeping time like a bass drum for the cacophony of my rattling ladder making its way around a solid trunk.

For the past three falls, this tree and its owner have shared the pear harvest, donated to canning projects in turn donated to local food banks. I would probably cry if it ever got cut down and no other tree in my usual and growing harvest rounds would ever be able to fully fill the void.

It's ironic, too, given that it's not just a pear tree, but a Kieffer pear tree at that, loaded with hard, green, gritty fruit that so many people let fall to the ground to become fertilizer for their lawn, a haven for wasps and a sign of a society with too much.

It doesn't have the allure of a fuzzy, sun-warmed peach with its funny bell figure, speckled skin and cool-weather harvests. It lacks the popularity of that quintessential fall fruit that cans stave off white coats, the apple.

It doesn't even have the cachet of its cousins, the bosc, bartlett or sugar pear.

It is a fruit that was meant to be canned, a storage pear. A heritage variety that remains steadfast in the face of disease, harsh weather and being shunned by fans of the household names of fruit.

Even I have wrinkled my nose at the mighty Kieffer, a reflex reaction from having tried to sink my teeth into them before it was time.

Today, while trying to lose myself in another tree, I found a flawless Kieffer laying on the ground, waiting to be rescued. It's skin had turned from pale green to butter yellow, its flesh still crisp but not jaw-aching hard. The sandy texture had mellowed but the flavour had been amped up.

It was sweet with a lemony kick, light, but unmistakably pear. It wasn't delicious, but it was good. Solidly good.

Which had me wondering, with so many around, with all the boulevard trees in St. Catharines, it could be this city's official street food. Why aren't more people eating was once one of the backbones of our local canning industry?

Consider this my effort to resurrect the once mighty Kieffer not only to the king of canned fruit but even worthy of being eaten out of hand. We harvested 500 pounds this weekend that culinary students will once again can for local food banks.

But before they do, I'm going to make sure they try eating one first with the hope of recruiting more to the Kieffer fan club. It's the least I can do for trees that have given so much, so unconditionally.