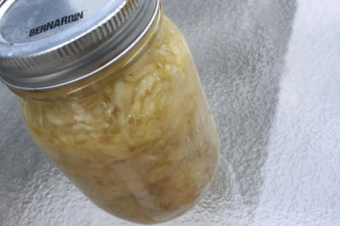 My husband has been eating the green tomato and onion relish like chip dip. Sweet and sour pickled beans with ginger have become my vice. And there's still jalapeños, blueberry chutney, wild foraged mushrooms found near Port Colborne, and chili sauce to tap into. But that's the beauty of a canning swap — the variety that fills your pantry afterward. Thanks to everyone who came to Niagara in Jars, the second edition, on Sunday at Rise Above Bakery in St. Catharines. About 40 people registered and 161 items were traded. It made me happy and so did this wonderful post about it, which describes it better than I could. Thanks Mama B. Just because the swap has passed doesn't mean I've packed preserving in for the year, however. I've been spending my last few attempts at something that once invoked the fear of god —  or botulism — in me. Lacto-fermentation. I've felt much braver about the prospect of letting my food sit and fester rather than heat processing it since taking a fermentation course earlier this summer. Still, it took a while for me to try fermenting on my own. It just seemed so hardcore and daring, which I'm not. And scary to boot. The thought of skimming mold or a cloudy film off the top of my veggies stewing in their own juices grossed me out and filled my head with visions of food poisoning until one day this summer, I got a cabbage in my CSA basket and decided to be a good German-Canadian. I decided I'd make sauerkraut. If ever there was anything meant to be fermented... So I pulled back my shoulders, sucked in my gut and held my head high as I attempted to conquer my apprehensions about a food preserving process I've long wanted to master. Lacto-fermentation is healthier than pickling and heat packing. The live cultures it creates and keeps alive — which heat would kill — are good for the gut and the B vitamins it produces are also a bonus. It's also ridiculously easy, fast and low-energy — much more so than cooking up a vinegar-based brine and bringing the canner to a boil. So I shredded that cabbage. I pounded gently and bruised that beauty of a green, waxy, bits of leaves to get their juices flowing. Firmly but gently.

And then I added salt — about half a tablespoon per pound of cabbage —  to draw out the juices more and packed it tightly into a sterile mason jar, leaving about two centimetres of space at the top, covered with filtered water and loosely screwed on a lid. Loose as a long-neck goose, to be more exact, unless you want cabbagey salt water to push its way out of the jar, thanks to the carbon dioxide produced by all those hard-working anaerobic bacteria in your jar needing a release. And that was it. Other than tucking it away in a dark corner of my counter so that I could keep an eye on it for the next few days, my job here was done. It was up to the bacteria under the surface of the water-turned-brine in the jar to work their magic. While some skimming was required because I was being overly cautious and removing anything vaguely cloudy, I remained unfazed. I sniffed regularly — usually a musty smell is a giveaway that things have gone awry — but it was cabbage, so it smelled bad regardless. Still, I won't lie. I did have to turn to my Twitter peeps for advice at this point because doubt was setting in. Helpful hints abounded and a few weeks later, I emboldened myself to give it a try. Guess what? It tasted like sauerkraut. It was firm and a lovely sauerkraut shade of gold, not grey, the 50 shades of which are a sure sign of fermentation gone wrong, should they appear. It also tasted sour and briny — maybe a little salty (the half a tablespoon mentioned above is a tweak from the three-quarters I tried first) — but unmistakeably sauerkraut. Conclusion: If it looks like sauerkraut and tastes like sauerkraut, it must be sauerkraut. My German-ness preserved.