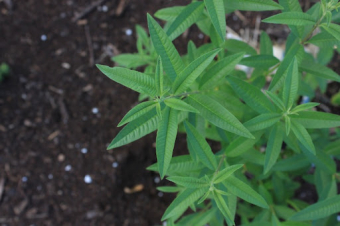 Herbs weren't what I most looked forward to growing when I embarked on my summer of yard sharing.

Tomatoes — lots of tomatoes — peppers, cucumbers and melons, those sun worshiping veggies that my shady, half a postage stamp of a yard eschews, were what I longed to harvest in my plot of sun-drenched borrowed earth.

And while I've loved being able to head just down the road to pick a tomato whenever I've needed, wanted or was left no choice by Mother Nature but to harvest them, I've discovered it's actually an herb I planted on whim that I love more this summer.

Not much to look at, lemon verbena — I'll call it LV — isn't what you'd call a beauty. It's appearance is pragmatic with those spiky green leaves. Perfect for photosynthesizing, not so much for admiring.

But one sniff and it's hard not to feel an herb I planted because I thought the bees might like it — turns out, LV actually attracts pests like spider mites — has beauty on the inside.

It smells like the freshest, brightest lemon — so citrusy that I can't help but wonder if lemons envy it just a little bit.

I inhaled my first cuttings from a month ago so deeply, I swore I sucked up all its beautiful scent with my schnoz. I took them home, hung them upside down in my kitchen for days and dried them for tea, their smell filling my main floor with a perfume with which even the best aromatherapy candle can't compete.

Even better was drinking it.

Imagine running into one of the most genuinely cheerful people you know. That's what it's like breathing in the steam rising from a cup of boiling water poured over LV's dried, papery leaves. Sipping it is like spending the day with that person. It's uplifting, you feel encouraged, their positivity filling you. It's a cup of sunshine.

It has become my favourite tea, usurping some of my tried and true, reliable store-bought bags. They're still good, but dullards in comparison to my zippy LV

But more than aromatherapy in a ceramic cup, LV has other benefits. No surprise, it's touted for its de-stressing benefits except among some people growing it.

Gardening blogs abound about how frustrating it can be to have LV in the garden. Strange, then, that me, with my barely green thumb, who really hasn't doted on it like I have those tomatoes, should have an LV plant that seems to be thriving. Perhaps the soil is well-drained, the angle of the sun just right in my borrowed yard. Or maybe, just maybe, the gardening gods are smiling upon me and have granted me a full-fledged green thumb after four years of practice.

LV is packed with anti-oxidants and is also good for the stomach and colon, particularly if suffering spasms, gas and indigestion. It can apparently fight a fever, cough and cold, double as an antiseptic, anti-inflammatory and serve as a slimming aid.

Seriously, what's not to love?

My Twitter friend, Culinartech loves cooking with it, particularly fish, which she'll prepare on top of a bed of leaves. But while I can't imagine not steeping my LV, there are plenty of recipes for jelly, syrup, pies, cakes and breads, and, what sounds pretty spectacular, lemonade made with LV.

It's not only like the friend who can make you feel better on a blah day, but one you're slightly envious of, too, because LV can do so much.

Really, though, LV is just something I'm grateful I've been able to get to know.

I'm a better person — more relaxed, to be sure, even if my pants fit as snugly as usual — just having it my garden. And mostly in my tea cup.

Sorry, tomatoes. You're great but you're no LV.