Foraging for mushrooms (and living to blog about it) 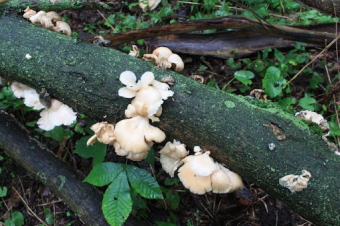 I'm not what you'd call a risk taker. I don't jump out of planes. I wear practical footwear. I carry an umbrella with me on rainy days. But today, in a take stock moment, I contemplated whether my insurance company might disown me for what I did this weekend. I went foraging for mushrooms. Yes, I can hear the gasps now. Seriously, though, this ranks pretty high on the risky behaviour scale, no? I mean, one wrong fungus ingested and I'm no longer a fun gal but one who might be deathly sick. Still, rifling through the woods in search of wild edibles is something I love doing. I've just kept it to plants and berries, waiting anxiously for the day when an old, Italian man would walk into my life, equipped with the knowledge to decipher between a beautiful, edible chanterelle and a deadly galerina. Mushrooms, in my mind, are the wild food holy grail. I won't lie, though.  Despite my reverence for them, foraging for mushrooms scares the heck out of me because of the potential consequences. I've never dared try it alone, despite the websites and field books I've pored over, trying to memorize the good guys and the bad while waiting for that elusive Italian elder to show me the way.

Instead, I found Peter Blush, a professional forager in Stratford, who leaves no stone — or log — unturned in the woods in his search for spored delicacies, including oyster mushrooms, morels and ash boletes. Blush, who learned how to tell the good mushrooms from any evil twins thanks to a biologist friend, hunts for mushrooms on the outskirts of Stratford, selling his finds to local fine dining spots, including Bijou. Given he nets about $10 per pound of these fleshy growths that sprout in the sun after a rain, foraging can clearly be a fruitful business. For me, I just have a fascination with wild food. I love walking in the woods and being able to pick out garlic mustard, wild garlic, ramps, dandelion, sumac, wild ginger, nettles, lamb's quarters and any other edible plant that could keep me alive, you know, should I ever get lost in the woods. It amazes me that so much healthy, potent, delicious food is right there under foot and disregarded by so many as pesky, pointless weeds. When I discovered Blush online, I felt my heart beat a little faster. He wasn't Italian but he could be the guy to teach me how to find mushrooms that won't kill me. I emailed him with Arnold Horschack-like zeal and tapped my fingers as I awaited his response. Over the course of the next couple of weeks, he provided me with updates on conditions, the need for rain, the joy at its arrival, the excitement at finding 10 pounds of bolete and oyster mushrooms the day before he would guide me through woods in search of my own haul. I was giddy. But alas, we didn't find 10 pounds. We didn't even find one pound. But we hunted enough oyster mushrooms, with their scent of the sea and greyish fluted tops, spongy ash boletes, a small and tender saddle or driad and a fine clump of the loofah-looking coral mushrooms for me to make a wild mushroom quiche.

I learned that ash boletes and oyster mushrooms don't have the evil twins that some mushrooms do. I also learned that if you don't find them almost as soon as they sprout — within hours of a rain — from whatever earth or deadwood is giving them life, the deteriorate nearly as quickly. They are fragile, mysterious. Enigmas. But tasty ones at that. I brought my haul home and carefully cleaned from the gills the debris and microscopic critters making a meal out of our find. I sliced through the spongy ash bolete and meaty oysters before tossing them in a pan with olive oil, rosemary, onions and garlic — the stars of my soon-to-be mushroom quiche. But by now, my excitement turned to skepticism. What if my professional forager guide was wrong? I watched closely as my husband tucked into a slice of quiche. "I suppose you want me to eat this first," he said dryly as he reached for a fork. I waited a few hours to make sure one of us was able-bodied enough to drive to the hospital if need be. Instead, he had a spring in his step and kind words about my creation, though I could sense his nervousness as he told me what a bang-up job I did in the kitchen. I think he could also sense mine. Hours later, when I sliced myself a piece of mushroom pie with measured confidence, the worrywart voice in my head trying to get my attention, I thought to myself, if these are deadly, I will die having eaten a really good meal. Today, I felt a bit smug, actually, as I wondered whether my weekend adventures were a proverbial flip of the bird to my life insurance provider. I'd still never go out mushroom hunting alone. However, I ate wild mushrooms that I hunted. And I lived to blog about it. Tomorrow, I may wear impractical shoes to work.  And with thunder showers in the forecast, I might just chance it and leave the umbrella at home, too.