A way of saying thanks to Niagara's migrant farm workers 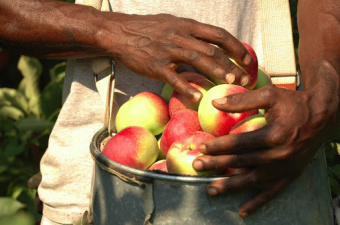 Every year, thousands of migrant workers come to Niagara to work on local farms. A scholarship fund has been set up to help send their sons and daughters to Niagara College or Brock University each year.

If you ate today, of course, thank a farmer.

But don't forget to include the seasonal farm worker when doling out your kudos.

Every year, thousands of men and women from Mexico and the Caribbean come to Niagara — and elsewhere in Ontario — to harvest the fruits of our local farmers' labour. Really, if it weren't for them leaving their families for several months of the year, our grocery store shelves would be bare because there wouldn't be enough domestic workers to fill the labour void.

Turns out, there is a way to say thanks beyond a friendly wave to the crew on the jitney driving down a concession road or giving a nod hola when we see them at the grocery store.

A new scholarship program has been created by two professors at Brock University to help send one boy and girl — the son or daughter of a worker — to university or college each year.

They have a lofty goal of raising $2 million to sustain the fund so if you're looking for a worthy cause to support, here's one to consider.

I never knew Ontario brought in thousands of farm workers every year until I moved to Simcoe 10 years ago as a cub reporter at the paper there.

I got there in January, during what I remember as a harsh winter. Everything was sleepy, dreary, closed up. But that spring, the town woke from its slumber with an energy and vibrancy largely due to the influx of workers who came to work in local fruit orchards and tobacco fields.

I loved summers in Norfolk for so many reasons and the life that migrant workers brought to the area was just one of them.

The workers added so much beyond helping hands in the field. I think it's pretty spectacular someone is finding a way to lend a hand to them in return.