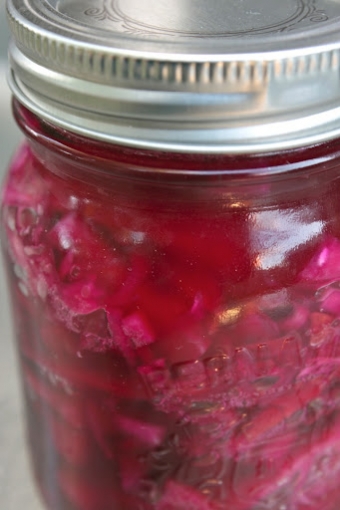 Lactic fermentation is an quick, easy and healthy way to preserve summer harvests without having to worry about heat processing.

If Jack had magic beans then I have a magic jar of vegetables.

It has sat on my kitchen counter for the past few days, intriguing me with every pass through the room. I stop and marvel, sometimes reaching for it to look at its contents more closely. I twist and turn it every which way to see what's tucked away deep inside. And each time, I swear my adoration makes its contents grow evermore pink, like ET's heart would glow when he was near Elliott. Truth is, it's because of the beets thrown into the mix of turnip, cabbage, kohlrabi and garlic scapes, which are turning everything a deep fuchsia. The real magic of this jewel-toned jar, though, is the smell. Like a kid who sneaks peaks of Christmas gifts under the tree, I discreetly unscrew the lid when no one is around and breathe deeply. I fill my lungs with a pungent earthy, peppery smell that reminds me of horseradish. It's the smell of everything mingling together in some exclusive vegetable club, though the real life of the party is the cabbage rejuvelac, a liquid probiotic, and salty brine, bleeding the red beets of their colour and causing it to soak into everything that seemed pale in comparison. My vegetables are fermenting and with every sniff, my mouth fills with water and my very soul overflows with anticipation of when I'll be able to stick a fork into my handiwork -- my first foray into lactic fermentation -- and decide if it's perfect or needs more time to stew in those delicious smelling, cultured juices.

What could go wrong?

Lactic fermentation has always scared me, I'm not going to lie. Unlike canning with heat, which I embarked on for the first time five years ago and with a zeal (or was that ignorance) that couldn't be quelled, preserving my food by aging it with bacteria has seemed daunting. Advanced. Beyond what a self-taught canner was capable of. I was worried that without the guidance of someone with experience to watch over me and my bacteria, I, quite frankly, would die of food poisoning. Still, fermentation has intrigued me; that elusive item on my culinary bucket list I so wanted to tick off. Fortunately, I found someone to show me how to make magic with bacterial culture and veggies, even though it cost me about $30 and trip to Kitchener. Still, I can rest (a little more) assured that when I dig into my fermenting mix, I'll not only survive, I'll have a tough time putting the fork and jar down. My workshop was held at Little City Farm, an urban homestead on the edges of Kitchener's downtown. It was led by Jackie McMillan, a woman who showed me how to forage safely nearly two years earlier. Given that I've scavenged for weeds and lived to tell several times since, I had come to trust Jackie and felt confident she wouldn't lead me astray this time with her gutsy eating habits. She deftly showed me and about a dozen others that lactic fermentation is actually easy and nothing to fear. Here's how it works: Lactic microbes develop on the vegetables, soaking in a brine, and convert their natural sugars into lactic acid. It doesn't take long for the concoction to become acidic enough to prevent bad bacteria from multiplying, averting disaster. Beans, beets, cabbage, cauliflower, cucumbers, kohlrabi, turnips and tomatoes are the vegetables Jackie recommends using in lactic fermentation. Bay, caraway, cloves, garlic, horseradish, juniper berries, ginger and mustard seed rank among some of the best herbs and flavourings to use.

Still, a warning: beware a musty flavour. It means whatever is being fermented has gone bad.

A health rush in a jar

The benefit of lactic acid fermentation to preserve foods is that it's less energy intensive and more nutritionally sound, Jackie said. Some of her fermented foods have lasted in her pantry for five years. All the while, the flavour and nutrition is preserved, she noted. What nutrients go into the jar at the start come out — and then some — at the end. Fermented foods have more B vitamins and protein from the bacteria. The plant cellulose is easier to digest thanks to high levels of live enzymes and the bacterial culture helps "seed the gut" with beneficial bacteria. It's raw, living food unlike canning with heat where Jackie said "you're doing yourself in and not getting the benefit" even if the food was initially fermented before being heat packed. Another benefit? The flavour. We sampled Jackie's fermented fiddleheads, asparagus, daikon and beans. Every sample was salty, briny, sour, pungent and spicy. Delicious, really, and other than the asparagus, which turned mushy and a bland shade of army fatigue, I could have kept eating.

None of that brine contained refined salt, though. It's bad for business with its mineral content removed in the refining process, Jackie noted. Think sea salt — Himalayan or Celtic — instead. "Do choose a full-bodied salt that has not been stripped and gives your body what it needs," she said. Filtered, non-chlorinated water is another key ingredient because chlorine inhibits lactic fermentation. Vegetables should be cut into pieces no larger than a half an inch thick to help along the fermenting process. We gently scrunched the sliced and diced bits in our hands before scooping the mix into our sterilized jars.We packed them down and topped them up, covering them with a red cabbage leaf to hold potential floaters in place so they could properly ferment with the rest of the mix, and then covered it with a mineral-rich Celtic sea salt brine. I was smitten with the rainbow of vegetables soaking in cultured salt water before the lid was screwed on my mason jar. Jack can keep his magic beans. I'm certain I've got way more goodness in that glass jar on my counter.

Adapted from a recipe by Jackie MacMillan.

Combine ingredients, except whey/rejuvelac and salt water, in a large bowl. Massage well to get to "bruise" the veggies and get them to start releasing their juices.

Pack into sterilized jars, leaving a three- to four-centimetre space between the veggies and jar lip.

Add 2 tablespoons of whey or cabbage rejuvelac, if using, and fill the jar, covering vegetables with salt water.

Salt water should be added until it reaches about one centimetre above the vegetables.

Store at relatively constant room temperature for 10 days and then in a cool dark place until ready to eat.

Halve garlic if cloves are large. If you like garlic, feel free to add more to taste but note that vegetables will take on the flavour of the garlic.