Of food and fathers 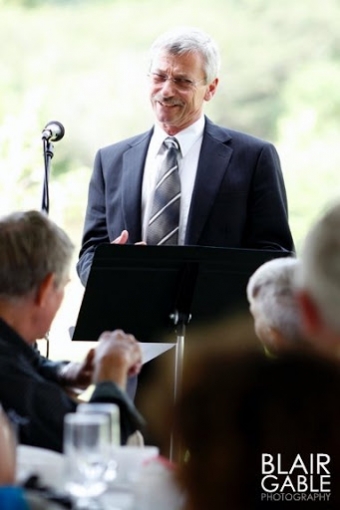 It's funny how a day that you know has been coming for weeks seems to surprise you when it does show up.

Like the prankster child who jumps out of the linen closet and startles the heck out of an unsuspecting parent. But hello, Father's Day, here we are. And you've brought with you my admission that despite weeks of the best intentions, no card was sent on my behalf to wish my dad the best.

That's OK. A phone call is much better than platitudes on fancy paper. My reminders this year that the day of all things dad was nearing came by way of Twitter and the Fiesta Farms feed, which is full of tweets encouraging people to sing the culinary praises of their fathers in Fiesta Farms' Apron Strings contest.

I love a good contest but for the past two years, I've been stumped by the Father's Day edition of it. They do have one for Mother's Day, too, which inspired me to write a post about the greatest wiz in the kitchen of them all, my Oma. Ironically, she's the mother of the man who had left me feeling hard-pressed to come up with tales of superhero feats standing over the stove.

There's no family recipe my dad, Ludwig, passed on to me. In fact, as a child, my mom did the cooking. But looking back, my dad really did have a profound impact on my life in food.

Before my parents separated when I was 11, there was a fat chance you'd find chicken or turkey on my plate. My dad hated them — they weren't typical German fare — and complained they had no flavour. Thanks to him I was a red meat girl, liked my beef medium rare to medium. Anything more was a crime. And like him, I never understood the allure of turkey instead of a sauerbraten during the holidays.

Pasta was a meal we usually had when we went out for dinner, unless you count the egg noodles covered with beef stroganoff or goulash we ate at home. Smoked pork chops, beef burgundy, sauerkraut, rouladen, sauerbraten and potatoes were our staples. Roast beef, roast pork, pork hocks, pigs' tails, landjagers -- no one I knew ate like we did, which wasn't always a good thing from a kid's perspective.

When my parents split, those foods started to disappear from my plate, replaced by pedestrian pasta and boring chicken breasts. Everything I had grown up with had been eschewed by mother, who was determined in those early years after the end of her marriage to do everything exactly opposite to how she spent the previous 19 years of her life.

At first, I didn't mind. I got caught up the novelty of noodles made from durum semolina instead of egg and of this new white meat replacing pork on my plate. But I grew to miss some of those foods that had clearly become a comfort to me. They were familiar and represented stability that would be absent for years to come.

If I complained, I got what would have been the worst invective my mother could have thrown my way at the time: "You're just like your father."

She wasn't far off the mark. Because of him, I know how to grill a steak like no other. While my mom was the mistress of the stove top, my dad was king of the 'cue. Salt, pepper, paprika and beer were all he needed to turn beef into something  beautiful on a summer's day. Sometimes, if he was feeling really daring, he might switch up the salt for some garlic salt.

I remember watching him work his magic, sharing sips of his stubby of Blue with those steaks or anything else that wound up on the barbecue. Beer always made it better. Sometimes, I'd appoint myself sous chef and lug every spice jar from the kitchen to his side, though he rarely strayed from his usual recipe. Those first bites elicited heaps of praise, resulting in the most modest of responses from my dad: "Naturally, I made it."

I'm entirely certain my dad, gracious soul that he is, is the reason why I now struggle with a decorous response to any compliment I'm paid. Still, I did grow up to become a bit of  a grilling guru, the one asked for advice quite regularly on how to properly barbecue a steak and the cuts to use. Even when I became a vegetarian, I still got queries and I've been known to push my husband out of the way at the helm of our Broil King because he's simply doing it wrong.

Even as a vegetarian, I still get (unfulfilled) cravings for liverwurst on dark rye bread. Best snack ever, though I couldn't handle the spatters of sharp German mustard my dad would sometimes add. I preferred atomic yellow French's, an insult to mustard in my dad's mind.

Cooking roles were often reversed at our cottage, a log cabin without power or running water on an island near Sauble Beach. In the mornings, my dad would be the first to rise and start working away on his other culinary piece de resistance, scrambled eggs and bacon. I thought his eggs were the best. My sister quietly grumbled they were too runny. Those breakfasts jumped the shark when I discovered I like ketchup on my eggs, much to my dad's chagrin. I ruined several dozen perfectly good chicken ova in his opinion, and my ketchup dousing ways resulted in the Mayer look of disgust, a comical contortion of the face and a guttural sound of utter disapproval.

My dad ate plenty of foods that caused me and my sister to recoil in horror or share confused looks with each other. Take the bacon grease left over from those cottage breakfasts. Solidified into white goop in the frying pan, it's called Schmalz, and he'd slather it with abandon on slices of that dark rye bread.

Or the time we went shopping at the Knechtel's in Wiarton and there, on a refrigerated shelf, sat pickled pig's feet, a prize find for my dad. He gravitated toward those briny cloven hooves and squealed with delight at the sight of them. Cue the confused looks between me and my sister, followed by "Dad, that's gross."

"That's not gross," he refuted in his heavy German accent.

Still, he put them back on the shelf and on we went with our shopping, no doubt in search of steaks. He also liked blood and tongue sausage and Limburger cheese, the stinkier the better. Enough said.

I haven't seen my dad, who now lives in Victoria, since my wedding three years ago. Our phone conversations are about as regular as they can be for two people who hate talking on the phone. But when we do chat, food is often part of the conversation. He tells me about his adventures salmon and halibut fishing, a conversation that gets me hook, line and sinker as I think about how much I'd love to do that with him. I'm certain once I got in the boat, however, I'd be on team salmon and not be able to handle what would become of anything reeled in.

I used to love fishing with my dad as a kid and to this day, he still holds the record in my world for biggest catch: a sixteen-inch steel grey catfish off the end of our dock  that tasted like the murky bottom of Lake Huron. I can still recall the photo of my very proud father in tiny blue shorts hoisting his catch, gut sucked in, chest puffed out and grinning from ear to ear.

These days, he gets his wine from one of those U-Brew places -- my dad, former Opimium Society member and wine snob extraordinaire. I remember those monthly trips to the liquor store to fetch cases of syrupy German Riesling because nothing else was ever good enough. Now he swears cheap South American grapes pull off a Gewürztraminer that isn't plonk. I don't really believe him.

And after a heart attack last year, his wife is plying him with more chicken and vegetables other than potatoes. Blood and tongue sausage has been banned from the house. He says he doesn't mind. Sometimes, he'll go so far as to say his plates of poultry taste good.

I think the guy who could never take a compliment has become a diplomat in his old age.