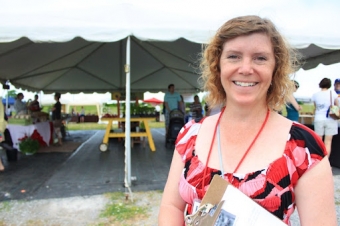 Look out, Lauren O'Malley Norris is on a mission.

And it's not just the clipboard in her hand as she makes the rounds at the Farmers Market at the Village on a recent Saturday morning that should tip you off. O'Malley Norris, the newly anointed manager for the Niagara-on-the-Lake farmers market, has big plans for this little market — one that she shopped at regularly until she took over the reins to run it earlier this year. Of course there are farmers, as many as O'Malley Norris can fit under cover of the white tents staked into a field wedged comfortably between the suburbia of strip mall and the pastoral beauty of a vineyard. And everything they sell will be harvested from Niagara. But there are also artisans — sock monkey wine bottle cosy, anyone? — those proffering prepared food, including Willow Cakes and Pastries, Market Chef Mark Walpole, food truck the Tide and Vine serving up freshly shucked oysters and live music. And there's more. A community garden is taking shape at the market. Zumba classes, co-working sessions, running group meet-ups, yoga and vendor-led workshops are in the works to make this a market for the masses or at the very least, one with as strong a sense of community as the historic town in which it's located. A smaller dinnertime edition of the market on Wednesday evenings, starting June 20, will complement the main Saturday market and feature more prepared foods, including the gourmet fare of St. Catharines food truck El Gastronomo Vagabundo. Farmers markets with just farmers are "one kind of farmers market and it has its place," O'Malley Norris said. "In our community, if we just had farmers, there are people who wouldn't come. To bring people to the farmers, you sometimes had to have other lures to bring them in. "I really want to create a mood, an event, something special." For O'Malley Norris, though, her favourite part of any market is the farmers themselves. Growing up in Toronto, she was a regular with her mother at the north market of the St. Lawrence Market,  used by farmers to sell their wares. "She loved knowing the ... guy with the chickens who gave her her eggs," she said. So does O'Malley Norris. That passion for market shopping was a passed on to her and O'Malley Norris has made a point of shopping at farmers markets in Niagara since she moved here from Toronto 10 years ago. She has also made the weekly jaunt to the Niagara-on-the-Lake edition since it opened in 2007. Getting local food into the bellies of others has also been a passion. O'Malley Norris volunteered with the Niagara Local Food Co-op to help promote that virtual farmers market when it launched around the same time and she helped get the Good Food Fair in Beamsville up and running two years ago. "I have been an avid, avid attender of farmers markets. I'm there rain, shine or windstorm," she said. It was her regular appearances at Niagara-on-the-Lake that made her an easy pick when the market was in need of a new manager. Recommended by Beth Smith of Ridge Meadow Farms and Rose Bartel of Bartel Organics, O'Malley Norris, a graphic designer by training, didn't hesitate when offered the job.

"I just jumped up and down. I was honoured," she said. "It brings together everything important to me: local food, the people growing local food, the land, the artisans and artists around us, too." The job was only meant to be part-time, but driven to make the most of a market brimming with potential, O'Malley Norris has been clocking full-time hours in pursuit of more farmers, musicians, community groups and artists who could make the Farmers Market at the Village "irresistible to everyone." Her dream market is one with primarily organic producers complemented by artists and prepared food vendors. Right now, about half the vendors in Niagara-on-the-Lake are farmers but they're all from small farms with diverse offerings. Not only do they have a wide variety of produce for shoppers, the also have O'Malley Norris's respect. "There's a grace, the earthiness, the rootedness and that letting go attitude with what they do," she explained. "Small growers are diversified so they can roll with the punches. I love that small farmer attitude." O'Malley Norris is also working hard to create a family atmosphere at the market — she refers to the vendors as her brood — one that she hopes will spill into the larger community and help that market grow with consumers, too. "I really hope that people who haven't come to the market come," she said. "I love the idea of bringing new people into this." Catch the Farmers Market at the Village Saturdays until the fall from 8 a.m. to 1 p.m. and Wednesdays for 4 p.m. to 8 p.m. starting June 20.