Cooking up peace at Conflict Kitchen 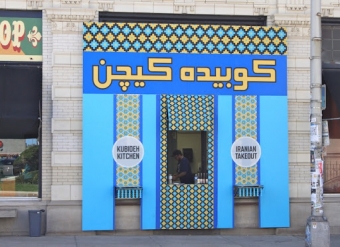 The arthritic canes of grapevines tangled together and stretched into the horizon to our left and right.

They rolled for mile after mile along the Interstate, broken up by the odd pocket of naked forest where the only signs of green were the patches of ramps poking through the earth. It was this serene scenery through much of New York and Pennsylvania that kept my husband Steve and me occupied en route to one place: Conflict Kitchen. The place with a name that conjures verbally abusive chefs and utensils hurled at heads isn't what it seems. It's a spot with a peaceful purpose and an enlightened one at that. Tucked behind a waffle shop in Pittsburgh's quaint-sounding Shadyside neighbourhood, Conflict Kitchen is a take away window dedicated to serving up street food from countries with which the U.S. is in conflict. Conflict Kitchen has been a place on my travel to-do list since it opened two years ago. I have a soft spot for people and places using food as a change agent, especially one as simple and brilliant as using food to better international relations. So Conflict Kitchen -- not the Warhol Museum or a Pirates game -- was the entire reason I proclaimed in January that I wanted to holiday in Pittsburgh this spring.

Conflict Kitchen opened as Kubideh Kitchen in 2010, selling Iranian kubideh. It's a sandwich that looks like a cross between a gyro and souvlaki, filled with spiced ground beef on barbari bread — a flatbread with black sesame seed — and topped with sumac, mint, basil and onion. Each kubideh comes with a side of information, too. It's stuffed in a colourful wrapper plastered with interviews, musings and information about fashion, politics, food and social movements, gleaned from Iranians both in Pittsburgh and Iran about their homeland.

The whole point is to give eaters food for thought about other countries "outside of the polarizing rhetoric of U.S. politics and the narrow lens of media headlines." The wrappers are definitely something to chew on while chowing on a kubideh.

These interview-based wrappers are produced for each iteration of the restaurant. As is to be expected, the thoughts and opinions that come through the interviews are often contradictory and complicated by personal perspective and history. These natural contradictions reflect a nuanced range of thought within each country and serves to instigate questioning, conversation, and debate with our customers.

Conflict Kitchen's lunchtime service is complemented by discussions, performances, even Skype meals with people in the countries featured, so that Americans and those they're supposed to be at odds with can dine together -- one of the most peaceful gestures possible. After all, food is that one, great uniting force because we all have to eat and nothing brings people together quite like a good meal and better company.

Since opening, Conflict Kitchen has also reincarnated itself as Bolan Pazi, serving Afghan takeout, and La Cocina Arepas, a nod to the dicey relationship with Venezuela before reverting back to Kubideh Kitchen earlier this year as tensions between Iran and the U.S. flared once again. Upcoming editions of Conflict Kitchen will focus on perennial hot spots, Cuba and North Korea, and earlier this year, some of the crew was able to travel to Cuba to research street food they could serve at their walk-up window.

Kubideh Kitchen was the version at which we ate when we finally made the trip a few weeks ago. Steve had the meaty kubideh and I had the vegetarian incarnation of educational eating, a kookoo sabzi. It's a walnut and herb fritter on barbari bread, topped with yogurt, mint, onion and sumac. I won't deny, it made me feel just a little self-conscious as I ordered in my hooked-on-phonics approach to Iranian street food-speak. The sandwiches were $5 each and everything was made on site by a small but dedicated team working in an even smaller kitchen. Money raised from food sales helps to keep Conflict Kitchen open. As I sat on a curb and munched on my kookoo sabzi in the shadow of a billboard atop the neighbouring waffle shop poignantly pointing out that Iran has the second highest Jewish population in the Middle East after Israel, a steady stream of hungry humanitarians stepped up to the window for some nosh and knowledge. It was a sight that could fill a person with hope at the very least. And only four hours down the road, it's a place that will fill me with more fresh food soon, I  hope, along with perspective and knowledge.