Lentil soup for the soul and a friend 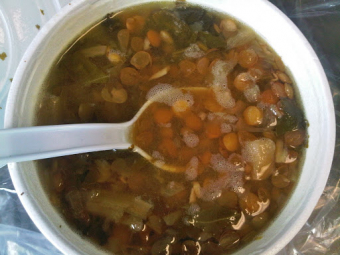 It's not every day that a near stranger lifts his shirt to flash me but it wasn't long after meeting Tony Barbari that he gave an eyeful.

The co-owner of Tonami Lebanese Cuisine wasn't being cheeky. He was simply showing me that human flesh is no match for shrapnel. Each scar on his bulbous belly, his arms, his chest serve as a constant reminder of how harsh life can be and the risks we take for love.

The discolourations, the rough, uneven skin, almost papery in places, that grew over his wounds, are the result of being injured in a bomb strike during Lebanon's civil war in the 1990s. Tony was on his way to deliver flowers to the woman who won his heart and who now shares his kitchen, Amira, when death toyed with him but ultimately took mercy.

Now living in St. Catharines, worlds and years away from the reality that once was, Tony has once again been taken by surprise by something I can only imagine must be just as frightening.

He is trying to rid his body of cancer and quite simply, I'm sad for him.

Tonami has been a lunchtime staple of mine since the restaurant opened on King Street next to Market Square in St. Catharines in 2007. That surprising moment of openness when Tony showed me what war did to him physically happened while I was interviewing him for a feature about newcomers to Niagara for the paper at which I was a reporter.

I was gripped for more than an hour as he told me his arrival in Canada this time around was his second attempt at trying to become a Canadian after he was beckoned back to war-torn Lebanon from Montreal as a much younger man to take care of his aging parents. The silver lining was that he met Amira, the love of his life who would one day become his life partner.

Then he fed me. Falafel, tabbouleh, stuffed grape leaves, hummus, baba ganoush and pita. A plate piled full. As I chewed, he told me how he just wanted to feed people good food and make them happy. How he couldn't wait until Amira, held up by violence in Lebanon at the time, would join him. How they would finally build the safe, secure life they always wanted in Canada. In St. Catharines, no less.

Ever since, it's been a rare week that I haven't stopped in for my usual: lentil soup and tabbouleh. Not only is it one of the rare lunches I can get for less than $6, it's just so good. I crave it. Their soup, with its splash of lemon juice is a favourite of so many I know and to those I've recommended it to, well, they've reported back with zeal and certainty that it's the best lentil soup they've ever had.

The real treat about going in the restaurant or visiting them at their stall at Market Square on market days has been the conversation. The life updates. The vacation plans — Tony and Amira have a ritual of going to Cuba in the winter now — the job changes (mine, anyway). We usually sign off with Tony passing me a piece of baklava on the sly.

He just waves me off and smiles.

Or blows me a kiss and wishes me well as I call it a day at the office and pass him on the street while he ushers in closing time at Tonami with a cigarette at the back door.

He has been a fixture in my eating experiences but he was noticeably absent last week when I returned from vacation and headed to the market to make up for lost time I accrued on holiday with some of that lentil soup and tabbouleh.

Amira was minding the stall with some friends and the restaurant, usually open, was closed for the day.

"Where's Tony today? Did he take the day off?" I joked, knowing full well that where there's Amira, Tony isn't far behind and vice versa.

Her expression became heavy, the smile, not normally as easy as usual, vanished.

"He is in the hospital," she told me.

Tony had been feeling pains in his shoulder and it turned out to be cancer knocking. He was undergoing chemotherapy to do away with the evil that this disease is.

I felt like a tool for suggesting he might be taking it easy that day, realizing he had it harder than most at that moment. I began to awkwardly root around in my purse for my cash that had fallen into what seemed like the deepest, most unreachable corner — one that I was starting to wish I could crawl into. As I did, I could hear Amira tell the women with her how I was one of their first friends in the city, ever since I did that interview where Tony revealed so much.

For years, the story I wrote was taped to a window in the vestibule of the restaurant, the newsprint yellowing and becoming brittle. I never thought much about it. People often hung up stories written about them in the paper for a keepsake or, in the case of businesses, to help entice more customers. I didn't think there was anything more to my story being there than that. But clearly to them, it was much more.

I checked in with Amira today and to fix another craving for lentil soup. Tony is weak and doesn't have much energy for talking, she said. He's tired and being kept company by the couple's two cats while she's slugging falafels. He'll be back in the hospital tomorrow for more chemo.

She seems so sad. I wish there was more I could do than buy lentil soup and tell her to let Tony know I'm thinking about him. But that's all I can do.

If you can, too, I know they'd be so appreciative. And when ordering what I'm willing to bet will be the best lentil soup you've ever had, give Amira a high five (or a friendly smile) and tell her to pass it on to Tony.

He needs it right now. They both do.