Where Niagara, BC and Germany collide 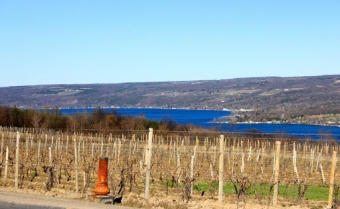 Take one part Niagara, one part Okanagan and a pinch of Germany and mix it all together.

What you get is the Finger Lakes. I saw shades of all three places last week in the geography, the sights, the tastes and the people as my mom and I travelled hilly and winding roads through this absolutely stunning region that is so close, it's like honourary Niagara. I'm embarrassed to admit how long I've lived in true Niagara before visiting these spindly lakes. Having so many wineries within spitting distance of each other reminds me of home. So did food finds like verjus and local concord grape juice (with the vintage on the label) and the overall importance of the grape to the region. But aside from the usual suspects of Riesling, Cabernet Franc and Chardonnay, there are plenty of grape varieties growing there that I've never heard of or only in far away places — well, farther away than two hours by car. Take  Gruner Veltliner, Rkatsitelli and Lemberger (oh my!), for example.

Disclaimer: I am not an oenophile but my heart nearly skipped a beat when I found Gruner Veltliner, that flagship Austrian grape, being offered up in fermented form at two of the wineries we visited: Zugibe Vineyards in Geneva and Dr. Konstantin Frank Vinifera Wine Cellars in Hammondsport. I fell in love with Gruner Veltliner last year while visiting Salzburg and as much as I enjoyed this sometimes minerally, sometimes citrusy food-friendly tipple, I equally enjoyed saying Gruner Veltliner. Grooner Felt-leener. Said in a singsongy way and it just rolls off the tongue (and down the gullet). To get my fix of this fast favourite, I figured another trip to Europe was in order, so I couldn't help but be just a little ecstatic when I found it growing so close to home. I've heard that Gruner Veltliner grows at Inniskillin Wines in Niagara-on-the-Lake, but ever since Vincor bought the winery, the grapes are used only in blends and not in standalone vintages. Pity, because I can't imagine I'd be the only person clamouring to buy it. At Zugibe, the first place I noticed GV on the tasting list, one sniff took me back Salzburg, to the alcove of a patio at the Alt Salzburg restaurant, a proper Austrian dining spot where the waiter wore a tux and a slight sneer. One sip of the New York GV, though, and the stodgy waiter was gone. My memory of him didn't come back until I got to Dr. Frank's abode overlooking Keuka Lake, where I tasted a GV that was more like the Austrian vintages that put a perma-grin on my face during my European vacation. Then came that mouthful of a grape, Rkatsiteli  (R-cat-sit-tell-ee), a Georgian varietal that has been grown for thousands of years in the former iron curtain country and for more than a few decades at the Dr. Frank's in Hammondsport. But for me, it was new. The late Dr. Frank, a doctor of viticulture and the patriarch of the Finger Lakes wine industry, came to the US by way of eastern Europe, bringing with him one of the most widely planted grapes in the world and one that can hack the cold well. Just like the climates it tolerates, Rkatsitelli is crisp and refreshing and, like GV, entirely fun to say. It was dry, lemony and light, like how I figure the love child of Riesling and Sylvaner could be. It's also worth the drive back to Hammondsport for more after I drink the one bottle I brought back. Hey, That's what a budget and fear of overzealous border guards will do to a girl. Then along came Lemberger, another grape that takes me Germany and makes me giggle just a little bit because mere mention of it reminds me of smelly cheese. It seemed as though just about every winery we visited had this blue-skinned grape blended with other reds or available on its own. A love for Lemberger would compel my Oma's late husband, Helmut, to drive for hours to buy cases the stuff at his favourite winery in Germany when he probably shouldn't have been driving at all. Not being much of a red wine drinker, the Finger Lakes editions were my first tastes. Fruity and far from heavy they were perfect reds for a Riesling girl like me. Really, it was being able to try wines so different from home that made me love this trip even more. I'm always curious to try something new, and along with some other unique cold hardy varieties developed by the masterminds at Cornell University in nearby Ithaca — I kind of liked the Cayuga and it's apple notes — there was plenty to keep my tastebuds piqued. And now the downside: Give me an off-dry Riesling and I'm smiling but wow, if I thought I liked a sweeter wines, Americans must love theirs. So much so, in fact, some wineries were serving up vintages with sugar added on the back end. Yikes. That's begging for a bad headache before the hangover even sets in. Good thing the Seneca Lake wine route is also known as the ale trail because while there's no shortage of wineries to woo visitors, there's also plenty of craft beer to help someone like me get their bearings again. Other points of interest about the Finger Lakes: It's more common than not for wineries to charge for tastings but they're very reasonable. It was $2 for five or six samples, depending on the winery. At Dr. Frank's, there was no tasting fee. If you're on FourSquare, be sure to check in because some wineries waive tasting fees for us social media geeks. Others offer $5 off if you pay for any purchases with American Express.

If you like cheese, there are numerous fromageries on the lakes, including a few goat dairies. If you can't make it to any, some wineries, such as Fox Run Vineyards, have food shops featuring local fare where you can grab the fixings for a picnic, or you can eat there and take in some gorgeous scenery. Dining out was surprisingly inexpensive, even in some of the more upscale places. My mom and I got away both evenings with supper comfortably under $100 for the two of us. That included appetizers, entrees and wine. It helped, too, that the B & B we stayed at, Bragdon House, had connections with some of the eateries and we were given a free glass of wine with an entree. Eating is also easy for the vegetarians among us. Greens and beans abound. I have no idea if this is the quintessential Geneva dish but so many of the restaurants in town had greens and beans on the menu. It was sautéed escarole with flageolets (a fancy word for white kidney beans), garlic and olive oil. We had ours at a neighbourhood Italian haunt called Torrey Park Grill that was packed with locals and they were delicious. Also an idea for the perfect vegetarian meal at home because it's such a simple dish to replicate. Served with bread, its super slurpy goodness. Best of all, everywhere we went people were friendly. We didn't find an ounce of pretension anywhere, which, I hate to say, I have encountered locally when wine tasting, though it's a rarity. Everywhere we went, staff were friendly, gracious and knowledgeable. They were proud of their product and grateful to share it with visitors. And we were grateful for it.