Of wine and spirits miles from home 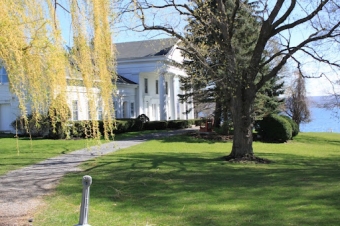 Call me a skeptic.

Or just call me a scaredy cat. That's likely to be more apt when it comes to me and ghosts.

I blame my yellow-belly ways on seeing too many scary movies as a kid. That morbid curiosity hasn't been a good thing. It spawned the need to sleep with a nightlight and an ET doll until my mid-twenties, and compelled me to make a quiet pact with whoever was listening one dark eve when something went bump in the night and put me on high alert: "I hope I never see a ghost," I said.

I'm a wimp. I know I'd wind up in the fetal position, blubbering and lying in a puddle of my own pee should I ever have a supernatural experience. I'm also not sure how my ticker, young (though aging) it may be, would handle it.

So it must have been the wine that emboldened me recently to go ghost hunting while tipple tasting in the Finger Lakes with my mom.

At the behest of our B & B hosts in Geneva, a mere two and a half hours from home in Niagara, we pulled off the road about halfway down the western shore of Seneca Lake. That's where we would find Miles Wine Cellars, a family-run winery and one equipped with plenty of spirits — the sort to drink and the kind to freak out a fraidy cat.

We opted to stop at the spooky winery mostly because we were told the vino was good. And, hands down, it was some of the best we tasted in our two-day tour of the area. But those vintages come with a pretty amazing story, too, about the Miles family, 40 ghosts and more than 30 years of a spirited co-existence.

We turned onto a long laneway that led us to the edge of the spindly lake, past row upon row of arthritic grapevines; past a cemetery, with its crooked, weathered and cracked headstones, the final resting place of some folks called the Raplees.

At the Raplee Family Cemetery.

And then, there it was — a Greek revival mansion, with its White House-esque appearance, cast in the late morning sun, against the backdrop of shimmering blue water, framed by a weeping willow and home to the winery. It was, in a word, beautiful. Others might call it heaven.

The reason it was so cheap: no one had been able to live there since 1928 and it had gone through dozens of hands; those thinking they were brave enough to hack it, only to move in and find out they weren't welcome. The house and the land, once the site of a ferry crossing, fell into disrepair because no one could stay long enough to make it habitable — at least not for the living. The deed, we were told by Doug's son Evan, even said the property and house weren't suitable for raising children.

But Doug and his family were different. They started by making peace with the permanent inhabitants, tidying up the cemetery, which had been carelessly mowed over by the municipality. Doug righted headstones, repaired some of the damage and clipped back the gnarly overgrowth.

He also began working on fixing the house, which we learned on a detailed tour, was a stop on the Underground Railroad, a safehouse for slaves on their journey north to Canada and freedom.

But wait, it gets better. You can't have a haunted house without a body in the basement. Years ago, Doug unearthed a skeleton in the cellar, buried beneath a large stone slab with columns that ran deep into the earth, when he turned what was a crawl space with an earthen floor into a bona fide basement.

Evan, our tour guide — and a Niagara  College brewmaster and Brock University Cool Climate Oenology and Viticulture Institute grad — told us the massive stone slab, which looked like a table meant for sacrifices, was actually an early form of refrigeration. The theory — and what the subsequent police investigation turned up — is that the skeleton was that of a young woman who likely had been living with a family in the home in the 1800s. She is believed to have died in the winter and times being what they were, those still alive couldn't bury her until the ground thawed. So, to the basement she went, to chill until a proper burial was possible. Eventually she was just buried there and the home was abandoned once again.

So admittedly, at this point in the tour, I was rapt. After seeing the slave hideout, a claustrophobia-inducing hole in the ground and hearing the skeleton story, my eyes were wider than the bowl of a red wine glass. Had that been it, well, I'd have left thinking my tour guide was merely a good storyteller.

The hole in the ground where slaves would hide until they could safely make the next leg of their journey along the Underground Railroad.

It was what happened earlier in the tour that caused me to cast my incredulity to the wayside and wonder if there might be something otherworldly about this place after all.

In addition to the tasting room, the massive house is home to a B & B. Those who test their mettle and stay here reportedly demand their money back when something creepy happens to them. Ditto for those who spend a night and actually get a decent night's sleep. The bed and breakfast business isn't proving to be the money maker Doug Miles envisioned.

But what to do with a gargantuan home that even the Miles themselves had to move out of, despite their best efforts to live with the ghosts. Instead, they built another house on the property to be the family home. Something about the tedium of the covers lifting off their bed at night and flying across the room, pictures falling off the walls and William's reports of feeling someone pressing up against him in bed (cue the chills) just got the better of them, I guess.

Still, it was in Evan's former bedroom, now a stunning guest suite, while trying to take a picture of a wardrobe believed to have belonged to Wyatt Earp and purchased eons ago at an auction for a song that I went 'Hmm... .'

Try as I might, my otherwise reliable Canon failed to capture the image of Earp's name scratched on the inside of the wardrobe. Even my flash wouldn't work, though it kept firing like a strobe light. As soon as I pointed the lens away, I got a perfect photo of a rather benign-looking bedroom.

Camera failure is common occurrence, Evan told us. Trying to get a shot of Earp's chicken scratch usually sucks the life out of batteries, he told us. Guess the ghosts must like me because I left with a lot of juice, just no photo to show for my efforts.

The lore here is endless, from the couple Doug sees occasionally on the front porch — a woman in a white dress and a man in a black suit — while doing yard work. They appear and then fade like mist. Clairvoyants have told the Miles as many as 40 spirits inhabit the house, including Doug's father, William, who died in the house.

The Miles are the longest continuous owners of the home and the thought is that aside from making nice with the ghosts, their name has something to do with them being so accepted by their spritely co-habitants. The original owner, and undoubtedly one of the 40 spirits, was named Miles Raplee.

Personally, I think the ghosts are a bunch of winos who know a good vintage. And there were plenty at this winery.

The standout for me was the 2007 Milestone, a super smooth blend of Merlot and Cab Franc grown in a year that was as hot and dry in the Finger Lakes as it was in Niagara — the kind of weather in which those red grapes thrive.

The Miles have even paid homage to their roommates with a wine called Ghost, a blend of Chardonnay and Cayuga, a cold hardy variety that was developed at nearby Cornell University to grow in the lakes' cool climes. The label bears the image of the mystery couple on the porch. Shine a flashlight through the brilliantly designed bottle and a Cinderella-like ghost floats behind them.

The natural sweetness of the Cayuga, with its apple notes, balances the drier Chard for an easy drinking sipper. Which is exactly what I'd need to help me brave more than a couple of daylight hours in the company (read: safety) of a friendly tour guide and thirsty tourists here.